The guys behind the Long Island-based vodka company, POOL Vodka, are a bit like Santa Claus for adults. They’ve been showing up at events, restaurants and more recently the Long Island Pulse magazine office with a cooler and supplies to hold vodka taste testing.

Don’t let the grins and friendly banter fool you, though, while they’re obviously having a good time they’re also working incredibly hard to build their business.

“We try to do this as much as we can,” Bryan O’Reilly said as he mixed up drinks for the Long Island Pulse staff. “It’s all about getting our name out there.”

O’Reilly and his partner Devon Woodruff got the office in the mood for fall, making a Caramel Apple Pie Martini (recipe below) and sharing another recipe for a Chocolate Pumpkin Martini.

O’Reilly and Woodruff launched POOL Vodka back in 2010 with a flavored vodka, but after challenges building their brand they went back to the drawing board and relaunched in 2013.

They now have two vodkas; one plain and one flavored, POOL BLUE, which is a blend of tropical fruits, coconut and lime. While a Long Island brand the vodka production takes place in Bardstown, Kentucky where the vodka is distilled six times.

Going back to the drawing board paid off.

“We’ve grown from being sold in three to four local places to more than 30,” O’Reilly said. “We signed our first distribution deal with the West Coast in Las Vegas and Southern California.” 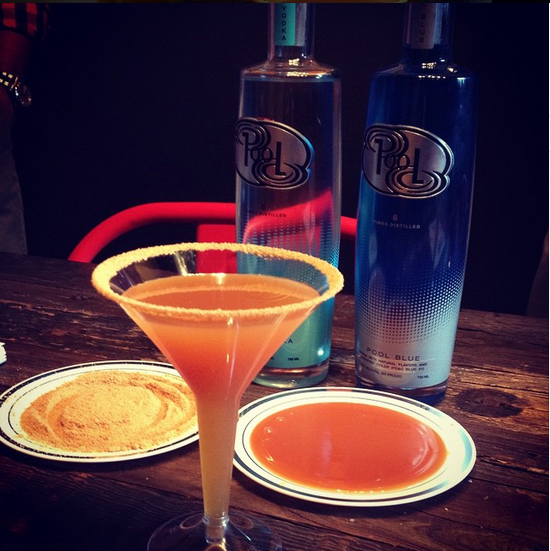 For them rebuilding and expanding is all about giving people a taste of the Perfect Out Outlook on Life (POOL).