One of the first things you notice when you hear Secret Someones’ hard rocking pop music is a deep respect for the not-so-distant past. When Nirvana cracked its shell and was born screaming and wailing the new sound of alternative rock in the late 80s/early 90s, a generation of young music makers took notice. The landscape of the music world was vastly different then, of course. Hip hop was poised to become hip pop, rappers seemed poised to replace singers, and the idea of the rock and roll band was on the verge of extinction. Hence the vitriol, the unrest, the rage, and the fierce embrace of all things underground, unblemished, organic and real. Nirvana’s lashing sound was a response to what was happening in the industry in many ways. There was justifiable pain and anger in Cobain’s scribblings from a life fraught with depression and pain and wild thunder in his guitar. But for all the ass kicking the band delivered, the big take away was the songwriting. It was a return to the basics: Great melodies, driving rhythms and that sublime balance of loud and soft swells that mirrored the human condition in the face of an increasingly hollow and robotic world. Some called it pop music in the best sense of the phrase.

Secret Someones were literally born when Nirvana was coming of age, so it makes sense that the band would make the reference. “Nirvana tunes were the first songs you learned growing up,” said Zach Jones who plays drums along with a multitude of other instruments. The band was discussing influences on a sunny day at Brooklyn Bridge Park. I mentioned that I heard the unmistakable “guitar wall” sound of Weezer but with female voices soaring over the top, and they agreed that this “consciously happened.” They mentioned that audiences make all sorts of comparisons—even to bands like The Eagles and Dixie Chicks. I keep hearing Haim, Lucius, The Bangles (the latter having been, perhaps, a big part of the shaping of the two former) at least initially because of the strong female leads. And then again, I heard Weezer. Even though they hit their stride only a few years apart from each other, there is a hole between Nirvana’s fiery grunge and Weezer’s bratty irony-laden rock that might need some explanation.

By the time Weezer walked through the door Nirvana and its predecessors had opened, the ire was transformed into something less destructive and more surreal. It wasn’t so much that the music industry or people’s tastes had transformed; it was more about interpretation and really understanding the formula. Life after Nirvana was lighter, in a sense, for some bands—at least in terms of lyrical content. Its music rocked as hard but was more whimsical. This idea seems to be what the members of Secret Someones are all about. In fact, they were playful and fun and full of laughter during our meeting, which would almost lead one to expect their music to follow suit in that innocuous lighthearted way…if it weren’t so seriously good.

Secret Someones is Bess Rogers, Hannah Winkler, Lelia Broussard and Zach Jones. Each member is a songwriter with years of touring experience in other projects, and each contributes to the songwriting process. Each sings, and while the girls handle most of the lead vocals, it’s difficult to discern who is the frontperson. It’s either that that notion doesn’t apply to the band at all or it’s too early in their development to make that distinction. A remarkably rare democracy, their synergy is palpable. They grow together. The conversation is fluid. We’re writing a song as we speak.

“We all write everything together—we don’t really have an ego,” explained Broussard, who plays bass, to which Jones added, “There is strength in numbers.” This notion exemplifies not only the band’s current songwriting process but also how they came together in the first place. While they all live in New York City, they came from different places with similar stories. Rogers grew up on Long Island in Lindenhurst, performing at open mics to “get over shyness” and spending some time exploring the ethics and collaborative ideology of the DIY hardcore scene (VFWs, Unitarian Universalist halls and love). She was going out on solo tours all over the country in between playing with Ingrid Michaelson’s band with husband and future Seceret Someones producer and “fifth member” Chris Kuffner. Meanwhile Broussard was gaining lots of attention for her work, appearing on Late Night with Jimmy Fallon and at Bonnaroo in 2011. They decided on a tour with Winkler, who was also developing a significant fan base, and they also agreed to play each other’s songs. Once Jones, who was touring with A Great Big World, was added, they knew they were onto something special. Right from the start, it was a family affair and the band garnered attention based on respect from previously established (and likeminded) fan bases. Because of that, Secret Someones bypassed some of the tribulations other bands go through at the outset. Their combined experiences and immediately accessible sound thrust them past the gatekeepers of the industry and they found themselves in front of large audiences right away. By themselves, they made little ripples in the water. Together, they became a splash. 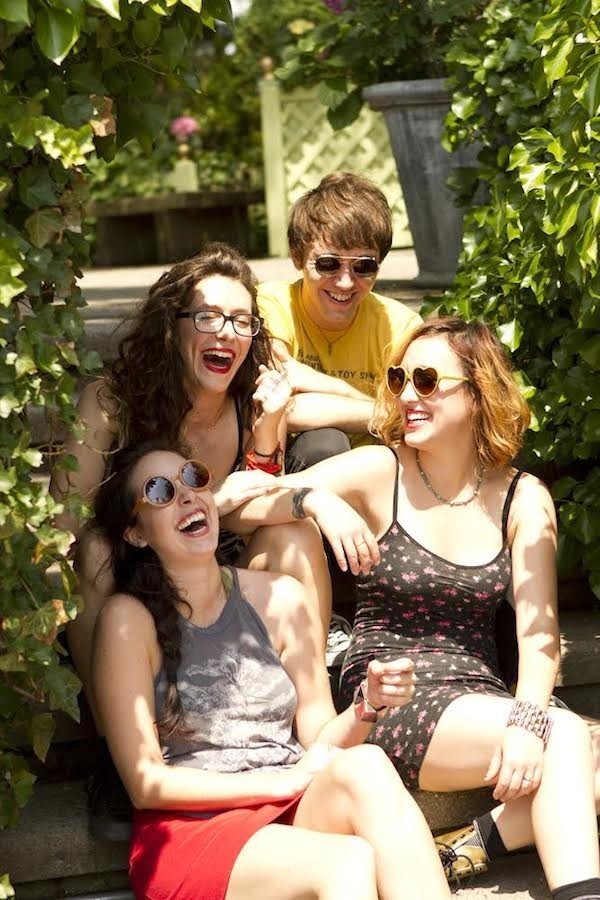 The name of the band comes from the title of a song by Portland-based singer-songwriter Laura Veirs. Veirs is a smart and catchy tunesmith with roots in punk and rock, another sensible influence for the ladies of Secret Someones. Her lyrics are often abstract little poems about identity and existence and finding beauty in the strange and the banal. While Secret Someones don’t often settle into overly abstract terrain they do have their share of poignant personal explorations and often write about empowerment and coming into one’s own. “It’s okay to be alone,” from I Won’t Follow is sung just before “No, I’m not afraid of the unknown.” And in “Chase Your Shadow,” the gorgeous lush harmonies come together around the lyrics, “I don’t want to waste my time / If I’m not on your mind.” There are other, less obvious turns of phrase, but in truth what makes this band different from other popsters who lay it all out in a fairly straightforward manner is the attention to craft and melody and those ubiquitous harmonies that ebb and flow like a wave or a memory. These are real musicians who deliver complexity if not through their lyrics, which are often earnest and straightforward confessions, then through their smart composition and stylized alternative rock aesthetic. They cast a wide net too. Young listeners will gravitate towards the messages in their songs, which are dressed up in undeniable hooks, while older listeners will be glad to see a true reverence for 90s music and maybe even some stuff before that too. Secret Someones take on Nirvana’s “Breed,” probably the band’s most raucous track thus far, pushes boundaries and shows the band can rock with the best of them. Although they come from the singer-songwriter tradition, Secret Someones are the antidote to the sullen introspection often associated with the genre. Especially the live show. “We like to think that we’re playing in a stadium each time we perform no matter the size of the room,” Rogers said with glee and zero irony in her voice. 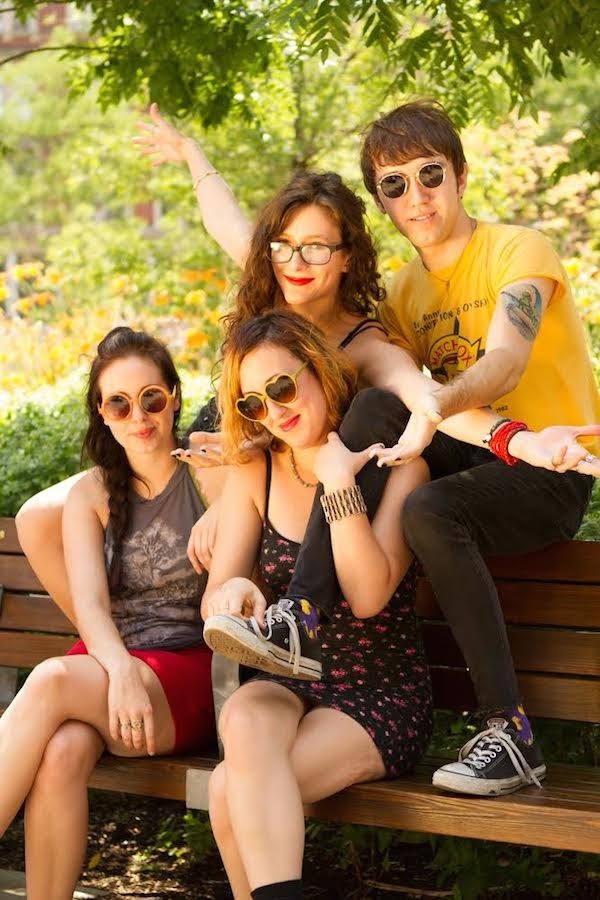 “The first time we got together, we were really nervous,” said Winkler, and the group giggled a little as close friends are wont to do. It was an experiment, after all, but one that has had extremely favorable results. The band was recently signed to Cherrytree Records, which is distributed by Interscope. They just released an EP and have a full-length album to come in 2015. They are on the verge of getting their music into the lives of many people, and this is a good thing.

We’re closing in on almost 25 years of music since the 90s began, and pop music is, again, in dire need of something healthy. It’s plagued by empty calories—sugary sweet treats void of nutrition that (to extend the metaphor) have led to a crisis in the way we consume music. We’re sick of what’s being served as pop, and we’re sick because of what is being served as pop. Secret Someones create a compelling blend of hard rocking alternative pop whose nectar is the good sugar (think: Agave or raw), fair traded and true. We smile and bop our heads and get on the merry go round for the ride, but we know the fun we’re having is good for us too.