Oogee Wawa travels all around the country on tour but no matter where the four musicians who make up the reggae rock band are, they’re always proud to represent their Long Island home. MC, Jesse Lee Roenbeck of Centereach, JP Aceto on guitar and vocals of Baiting Hollow, Chad Chadwick on bass of Selden, and Nick Loiodic on drums and vocals of Smithtown were friends just messing around playing at bars before they officially started Oogee Wawa. Now, they’re on a national tour and getting ready to release their second full-length studio album “More Sand Than Money.” 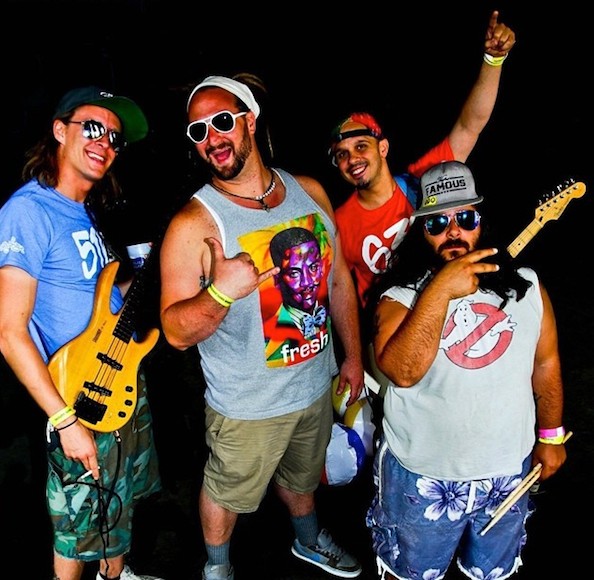 Pulse Insider: How did you get your start in music? Was there a point at which you knew you wanted to be a professional musician?
OW: As a band, we started what is now Oogee Wawa just by being friends and messing around out at bars free-styling and making beats where ever we could.

JP, Chad and Nick were all in bands prior to Oogee Wawa, so being professional musicians is something that was ingrained in them for sometime. For me, Jesse, this is my first band and I knew that this is what I wanted to do the first time I heard a crowd roar for a song I wrote. Making music your life is a constant struggle. Being a touring musician is not as glamorous as everyone thinks, but each new fan and every new person who is touched by our music makes it all worth it.

Pulse Insider: How would you describe your music to someone you just met?
OW: It’s hard to categorize Oogee Wawa. We don’t really sound like anyone but ourselves.

We have gotten a lot of love in the rising reggae rock scene and we take a lot of pride in that. We are working very hard to build up this family of bands from all over the East Coast.

We have been told many times that we sound like a cross between Sublime and Gym Class Heroes. We try not to get stuck in a genre though; diversity is such an essential thing to us when creating songs. It’s just feel good music for all to enjoy.

Pulse Insider: Who are your greatest musical influences?
OW: What makes us so unique is the extremely diverse musical background all of us have.

I’m obviously the HipHop rooted one but with a long past of musical theatre. Nick also has a long musical theatre past and brings his flavor of Motown and Soul to the mix. JP is the rocker of the group who introduced the reggae influence and Chad was a drummer in a Punk band for the better part of 13 years. Needless to say writing sessions are a lot of fun. Our biggest influences range from Sublime to Lag Wagon, from Nirvana to The Jackson 5, from Tonedeff and Nas to Korn and The Strokes. We tend to be listening to a lot more reggae bands like SOJA, The Dirty Heads, The Movement and Ballyhoo.

Pulse Insider: How did you get the name Oogee Wawa?

OW: For many years instead of saying “cheers” or “salute” we always said Oogy Wawa. In one of our first bartending books it showed you how to say cheers in all different languages and the very last one on the page was Oogy Wawa-Zulu. We took the phonetical spelling because it was easier to chant “Double O G Double E Wawa.” Big things to come with Oogee Wawa so strap in and enjoy the ride.

Pulse Insider: What’s next for Oogee Wawa?
OW: Oogee is constantly on the move. We are heading out on another National Tour that will bring us coast to coast. We’re releasing “The Late Night Acoustic EP,” and our second full-length studio album, “More Sand Than Money,” is coming out in early 2015. For most of December we will be in the studio finishing that up while getting ready for a south-east tour in January. Jesse Lee is expecting the birth of his twin babies in late February, early March so we will be staying local for those two months , but then it’s back to the grind with touring starting in April.

Pulse Insider What do you enjoy about performing live?
OW: What’s not to enjoy? Whether you have 12 people or 1200, if folks are getting down and moving to your songs, there is no better high. We damn sure don’t do it for the money, but I won’t lie the fame that comes along with it is pretty nice.

Pulse Insider: What non-musical activity most inspires and energizes you?
OW:When we are not rocking a crowd you can mostly find us in the water surfing or just chillin at the beach, or the bar. We try to get out to as many local shows as possible to always be showing love and support for the Long Island music scene. We are all working toward the same common goal so go out and SUPPORT LOCAL ORIGINAL MUSIC!