When Alex Abrash was house hunting in 2010, he needed a home with a space where he could operate his CD mastering business, AA Mastering.

Abrash and his wife, Hui Ling Mai, settled into a Plainview ranch that had a 16 x 13 extension with a 10-foot-high ceiling to accommodate his equipment and tall speakers.

“I decided to look for a home that had a dedicated area where I could set up my business,” Abrash said. “So that was a prerequisite as we were shopping around.”

A former studio manager at Kamp Audio Video in Manhattan, Abrash, 52, started AA Mastering as a recording service in 2001 and worked out of his Forest Hills apartment. The one-bedroom pad had a large room that he split into a living room and workspace, where he performed multitrack recording with a mixing console, tape decks and microphones. Initially, he wanted to start a label and he recorded an album for a Latin artist who sang all of his tracks in Abrash’s apartment.

“Of course, it was very, very difficult because of all of the external sounds, and I had a neighbor that didn’t like the noise,” Abrash recalled.

On moving into his home on a quiet street in Plainview, he turned the den into his studio. He ran a rug over its concrete slab and mounted bass traps, a soundproofing that resembles couch cushions, on the oak panel walls.

By then he had already returned to his roots in mastering and started a service for CDs. But when CD sales started to dip considerably and his business slowed, Abrash explored other options. He found that in the age of iTunes and Pandora, the vinyl record industry was nevertheless experiencing a strong revival. 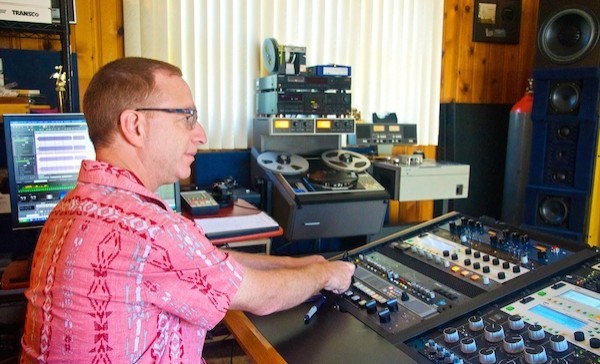 Alex Abrash operates the digital-audio workstation in his home studio in Plainview.

“The new people that were working in the vinyl business, they were very busy, and their businesses were not being affected,” he said.

After a year-long search for analog equipment in 2013, he located a Neumann VMS-66 vinyl cutter head and lathe machine on the island of Jamaica, which cost him $40,000 to buy, ship and restore. He squeezed the 1,200 pound unit into his workspace, where it shares space with a digital-audio workstation and processing equipment.

For each project he receives from various companies, Abrash cuts a master lacquer and sends it to a pressing plant for mass production of records. His work covers a broad spectrum, from classical to club music. On a recent weekday, he cut an album, titled Black Sails, for a metal band named Wages of Sin.

That Abrash moved to a peaceful Nassau County neighborhood in a home on a concrete slab has proved to be invaluable to his vinyl mastering business. 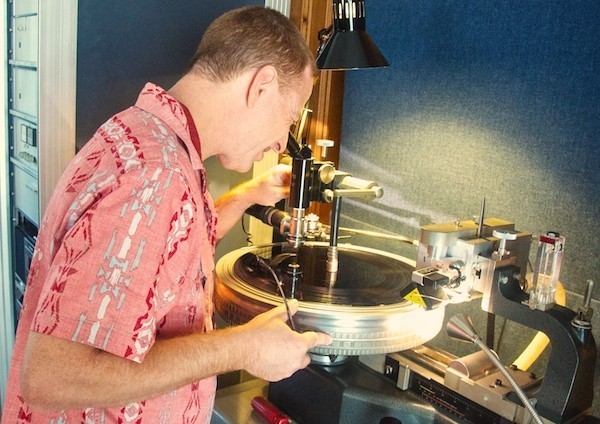 Alex Abrash cuts a master lacquer on a Neumann VMS-66 vinyl cutter head and lathe machine in his home studio in Plainview.
“That’s really important because the machine needs to be on a good foundation, and it needs to be quiet because external vibrations will affect the ability of the machine to cut,” he said. “Cars, buses or trucks, or any kind of noise that can go through the structure of a building, will literally get cut into the groove.”