Terror is never more palpable than when it hits close to home. Everyone knows Amityville’s history. But what about the lesser-known legends creeping in our own hometowns, lying in wait just below cemetery plots or beneath creaky floorboards? We asked Long Island’s paranormal investigative duo, The Paranormal Adventurers Joseph Flammer and Diane Hill, to share the most chilling tales of local hauntings they’ve unearthed. Though when invariably asked what’s the most haunted place on the Island, the duo’s answer is “The place where you see a ghost.” So if one dares investigate the enclosed tales, the duo’s advice is: Bring a camera.

February, 1895. A ferocious winter storm of cutting sleet and driving snow rendered sails on the Louis V. Place unmanageable. The three-masted schooner out of Baltimore, loaded down with coal and bound for Boston, was covered in ice and shipwrecked off Fire Island across from Sayville. Of the eight men aboard the ship, only one ultimately survived. The bodies of four crewmembers were buried in donated graves at Lakeview Cemetery on West Main Street in Patchogue.

Within days after the burials, The Brooklyn Daily Eagle reported the first of three accounts of a ghost wandering through graveyard and romping in the icy creek that ran through the property. Residents of the village, braving near-zero temperatures, turned out nightly hoping to catch a glimpse of the cemetery ghost. They huddled on the road at the entrance to the graveyard and peered into the darkness. One night, a local athlete trying to impress a girl, was determined to catch the phantom and expose it as a hoax. But try as he might, the ghost outran this “faster than a hound” athlete, the paper said.

Today, strange images are still seen at Lakeview Cemetery. Witnesses have reported a blue ball of light appearing among the gravestones and flying through the trees at night. Former groundskeeper and chairman of the Cemetery Restoration Committee of Patchogue Steven Gill recalled one day seeing an old man gesturing at the graves of the sailors, speaking frantically in an unknown dialect, then vanishing. 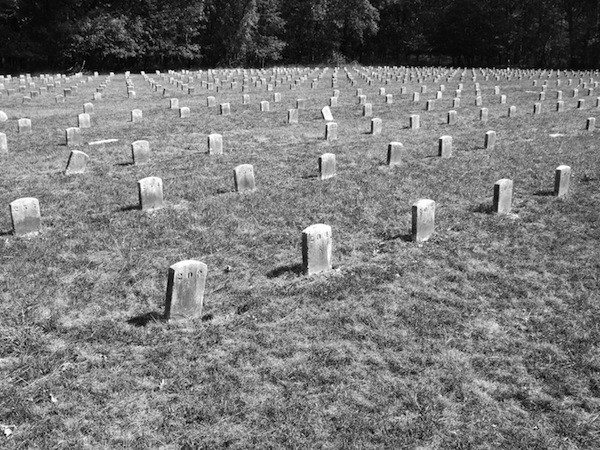 The Lady in White of Union Cemetery, Middle Island

Searching the files of now-defunct Suffolk County Police Department’s Sixth Precinct in Coram, one will find a tale of good Samaritans terrorized by a pale, glowing ghost wandering the roads near Union Cemetery in Middle Island. The records span from the 60s-90s and all detail stories by men and their encounters with what has come to be known as The Lady in White.

Legend has it that on misty dark nights male drivers are lured to the shoulder of the road on the south side of Route 25 in front of Union Cemetery by the sight of a hitchhiking woman in a white gown who appears to be glowing in the dark. But as the stunned drivers watch for the mysterious woman in their car mirrors, waiting for the lady in white to walk to the passenger door, the car engine dies and an old song comes on the radio. The woman knocks on the window suddenly and looks in at the drivers, as if wanting something. Then, before their wide eyes, she turns into a cloud of white mist that circles the vehicle and soon drifts into the cemetery to disappear among the graves.

The police records tell a similar story, with some even claiming to have struck the women. One such victim drove on to the nearest diner, where he hysterically confessed the story to the diner’s manager. Having heard this tale before, the manager calmed him and let him know that he had encountered the Lady in White.

People speculate the ghost is that of a young woman who was struck and killed by a hit-and-run driver in the 1950s while hitchhiking at night.

Tucked away on the right-hand side of the road at the very end of the eastbound entrance ramp to Exit 67 of the LIE sits Almshouse Cemetery. It’s the final resting place for over a thousand souls, almost all of whom resided at the now long-defunct Suffolk County Poor House, or Almshouse, located five minutes away by horse-drawn hearse on Yaphank Avenue, near the county farm.

The first burials were in 1872 and the last burial was in 1953. The small gravestones in Almshouse Cemetery run in uniform rows and are marked not by the names of the interred, but only by numbers. The people who lived in the Poor House were homeless, indigent and records from 1871-92 cite lunacy, intemperance, destitution, pregnancy, weak mind, cripple and consumption as reasons for admission. They were unwanted, loathed by society, and desperate. There were no treatments offered for the sick. Some of the people who ended up at the Poor House were sent there by the courts instead of jail. Some were orphaned children. Everyone answered to bells to awake, sleep, eat, and anybody physically able had to work at the nearby farm or they could not stay.

Today, the unrest these residents experienced in their waking lives seems to have lingered. Many claim to see strange orbs of light flying amid the graves and into the surrounding pinewoods. People commonly report hearing voices in the night, laughing, singing, humming, crying and screaming. Sometimes there are groups of voices like people calling out for help. Psychics who investigated the graveyard claimed to have made contact with the spirits of people buried in unknown mass graves there. One experienced ghost investigator claimed he saw a little girl dressed in olden attire, but wearing no shoes, walk through the tiny gravestones and then vanish.

The Almshouse building still stands on the Yaphank Avenue, but it is today occupied by the Sheriff’s Department. The words “Suffolk County Home” are etched into stone above one of the building’s doorways.