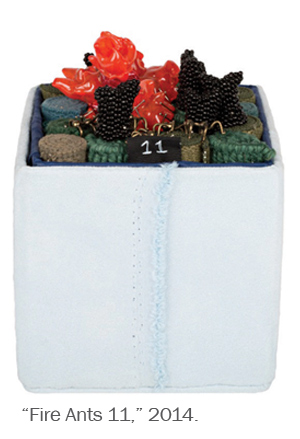 Steven and William Ladd: Mary Queen of the Universe
Through the new year, the Ladd brothers bring a collection of sculpture, drawings and prints to Water Mill that burst with detail and combine design, fashion, art and craft. The duo started out with haute couture handbags and accessories that evolved into “towers,” intricately assembled textile boxes containing elaborate ties and bags that they unstacked and unfurled as performance art. This latest show brings the viewer back to the duo’s grade school experiences. A childhood interaction with ant colonies has the diminutive creatures rendered in metal and crawling around tightly coiled fabric swatches. Preparatory drawings will also be on display so attendees can gain insight into the Ladds’ creative process.

Steven and William Ladd: Mary Queen of the Universe will be showing until Jan 19 at the Parrish Art Museum in Water Mill. (631) 283-2118, parrishart.org 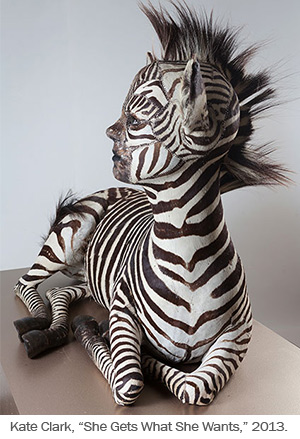 Artists have created illusory works since ancient times—witness the realistic painted gardens of excavated Pompeian villas. The term trompe l’oeil came much later, but the idea is the same: A vivid 3D effect expressed in two dimensions. The Faux Sho’ is a contemporary take on the technique with a bit more latitude to the meaning. Among the more traditional examples is Tim Conlon’s depiction of graffiti-scrawled trains that pay as much attention to the train details as to the wild style. However, the sculptures really take on the concept of illusion. Brett Kern renders seemingly inflatable toys in ceramic and Kate Clark creates an impossible taxidermy of human-animal hybrids utilizing actual hides.