Friday nights are special. They don’t quite have the rampant and incautious “let’s rage” vibe of Saturday nights, nor the reined-in “school night” feeling of other days of the week, but they definitely lend themselves to pulling on a shiny shirt and venturing out into the world.

The betwixt and between nature of a Friday night—tired from the work week, but looking to celebrate the weekend—actually makes it a great evening to go out to dinner. (Not to grab a bite mind you, but dinner, as in, the main event.)

Pulse people eat out a lot. We’re constantly exploring restaurants, bars and out of the way
places to find the best local kitchens. We asked our experienced, in-house focus group to name their favorites then aggregated the results and combed a few choice quotes to round out the recommendations. Consider this an informed cheat sheet for a fantastic Friday.

Pricing
Very generally, Casual selections are under $20 for entrées, Cool Upscale spots are between $20 and $30 and the Fancy category is over $30. However, atmosphere was taken into account as well as pricing, which can allow for some deviation from these guidelines.

Date Night
[Cue Barry White] Awwwwww yeah! It’s just you and that special someone tonight! The vibe is right, the candles are alight and it’s time for your love to take flight… 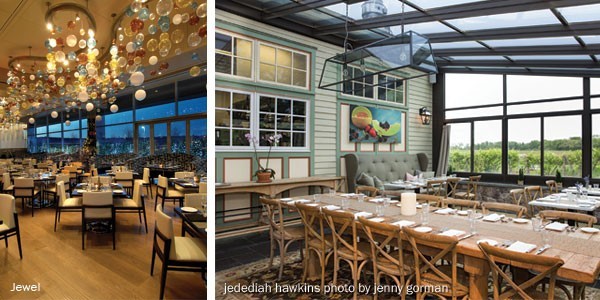 Casual
If you’re feeling adventurous, head to Grimaldi’s Pizzeria in Brooklyn. The pizza’s legendary and the restaurant is enough of a landmark to feel special. The Whale’s Tale in Northport is also a fun waterfront spot where a couple can get reacquainted. Their specials and almost shockingly perfect pub grub are can’t miss. A third option here is Joe’s Garage and Grill in Riverhead where our staffer says, “the large garage doors open up so the whole restaurant feels like it’s outdoors.”

Cool Upscale
Sangre de Uva (blood of the grape) is a great tapas place in RVC and the small plates are conducive to conversation rather than rampant face stuffing. Make sure you try at least one item that’s slightly out of your culinary comfort zone—sweet plantains with cinnamon sour cream or perhaps chorizo in a caramel sauce. Swallow is another Pulse pick for tapas. Locations in Huntington Village and Montauk offer offbeat mouthfuls like butternut squash cappuccino with truffle froth and miniature grilled lamb porterhouses. If you’re not feeling small plates, try Yummy Yummy in Long Beach. In New York’s delivery-heavy Chinese food culture, it’s easy to forget how great freshly fried dumplings
or scallion pancakes can be. Yummy Yummy’s skilled chefs—who also prep sushi and scattered Thai dishes—make the case for face-to-face Asian with every crispy, steaming plate.

Fancy
This is the big one. The anniversary, the birthday, the just-landed-a-major client place. Our staff liked the upscale innovations en français at artsy and cool Almond in Bridgehampton, the Delmonico and Flintstones-style steaks at Tellers American Chophouse in East Islip and the Mediterranean delights at Kyma in Roslyn (Greek dining in sparkling white and cool blue). Another way to go is Aji 53 in Smithtown and Bay Shore. This Japanese-fusion kitchen turns out what our crew called “creative and elegantly-plated sushi in a trendy, funky atmosphere.”

Girls’ Night
Oh. My. God. This week just would not end. It’s time to blow off some steam with the girls and laugh about things no one else understands.

Casual
Staff faves here were numerous and included Del Fuego in St. James for tacos and tequila and Bobbique in Patchogue for great beer and unique, smoky grub. Cedar Beach Bar & Grille is another nifty place to kick back. The go-to move here is to arrive early, grab a few drinks and then watch the sunset. Vinoco in Mineola was also earmarked for its Peruvian take on tapas.

Cool Upscale
Lovely ladies light on loot will like the small plates and live jazz and blues at Treme in Islip, which has an outstanding cocktail list as well as a healthy respect for the wide world of cheese. (They offer cheese plates as well as a three-cheese Bourbon Street panini.) Another good choice for this kind of night is Rumba in Hampton Bays. “The island vibe and drinks make you feel like you’re somewhere tropical,” our source wrote. 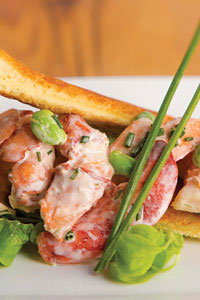 Fancy
To quote one anonymous staffer, “The dinner menu at The Argyle in Babylon is awesome and the watermelon martinis are a problem.” We also like Argyle’s familiar favorites and their clam bake special. Other mentions in this category included the “unreal steaks” at Prime in Huntington (again: Flintstones, but the scene is decidedly understated yet chic) and the Palm Court at the Carltun—which may well be the Island’s most classically beautiful dining room. Another cool idea is to hit the ultra modern Jewel in Melville. Within Jewel is a small sushi bar called Be-Ju—and between the prime meats, fresh seafood and pastas there’s an option to suit every appetite.

Guys’ Night
Be it a bachelor party or a simple night out with the boys, these spots deliver a fun Friday with the fellas every time.

Casual
Painter’s in Brookhaven is a good choice here. Their locally sourced menu includes a chicken served on its own iron roasting skillet and their Far Out Fridays feature live music and DJs. (They also let you write on the tablecloths.) Bareburger is another way to go with a gang of guys. They have locations in Great Neck, Forest Hills, Bayside and in NYC and make excellent use of underutilized meats like elk, wild boar, ostrich, buffalo and walrus*. (*Not really. They don’t have walrus.)

Cool Upscale
The Bulldog Grille in Amityville was mentioned enthusiastically in this category for its dedication to large plates of filling food. We also received an impassioned nod to Mara’s Too, a tiny eatery with a New Orleans theme in Wantagh. (Try a true Cajun favorite like gator bites or blackened pepper shrimp.) The Grey Horse Tavern in Bayport was another nominee. Their menu has faves like a crock of homemade mac and cheese and a spicy bucatini with local littleneck clams, roasted corn, garlic, cilantro and lime. The Grey Horse’s careful beer selections also represent a rich mix of flaves from Long Island and beyond.

Fancy
So Brad’s finally getting hitched and it’s time for the big man’s last night of freedom. There’s no way to go wrong with one of America’s greatest steakhouses: Peter Luger. The original Luger’s is in Brooklyn, unfortunately you would have needed to call for a reservation in 1993. Luckily there’s another location in Great Neck that can be more accommodating. Other options in this category are the Capital Grille in Garden City—we suggest you start with the Grand Plateau of crab, lobster, shrimp and oysters—or Delmonico’s in Southampton where the “tomahawk” steak for two is, in one staffer’s words, “ridiculous.”

Couples’ Night
Maybe there are friends in from out of town, or maybe it’s just a chance to reconnect with your favorite couple. Either way, the babysitters are hired and it’s time for reservations at…

Casual
Roots Bistro Gourmand in West Islip is an ever-evolving, French-influenced eatery on the cutting edge of modern gastronomy. The Bellport in, you guessed it, Bellport, has a corn-crusted oyster salad that never fails to please. We also like the comfort food at Sapsuckers in Huntington and Koiso—a sushi restaurant in Carle Place that’s run by a husband/wife team. Speaking of couples, these last three entries are actually all run by couples, which means they’ll understand what you’re looking for. (Roots may not be run by a couple, but there is a dynamic duo in the kitchen nonetheless.)

Cool Upscale
Havana Central is a good place to start a couples’ evening because of their expansive cocktail menu and boisterous atmosphere. On the other end of the Island, Greenport’s Frisky Oyster has an Asian-accented glazed short rib that’s a staff favorite and a hang out that’s hip year-round. MP Taverna in Roslyn makes spicy lamb dumplings as well as offering an entire menu of whole animals that includes spring lamb, kid goat, suckling
pig and rack of steak. (Large-scale roasting is a Greek celebration tradition, the menu explains—perfect for you and your group to reconnect over.) The most enthusiastic recommendation we saw in this category was for Ciao Baby in Massapequa. “They have a meatball that’s the size of a cantaloupe that you share with the whole table,” our staff er wrote. “They also have sauce that tastes like my Aunt Angie’s.” Hey, we’re not about to question Aunt Angie’s sauce.

Fancy
So Bill and Melinda Gates are coming to town and they want to take you out? Cool. The Pulse staff is jealous, but we also have some dream spots for dinner: Jedediah Hawkins is a one-stop inn, restaurant and speakeasy—and it’s a great choice. As much a landmark and a destination as it is a restaurant, the endlessly creative menu changes as quickly as what’s locally available. Fisherman’s Catch in Point Lookout and Lombardi’s On The Bay in Patchogue are waterfront destinations where the views are as delicious as the food. And Savino’s Hideaway in Mount Sinai offers homemade Italian in an atmosphere where our staffer said, “each table feels secluded.”