Is it possible that teatime would be our national snack break and Queen Elizabeth our monarch if a group of Long Islanders hadn’t formed the Culper Spy Ring during the Revolutionary War? Probably.

The Setauket-based spy ring, which reported to George Washington, was certainly crucial to American victory. Brian Kilmeade, who coauthored with Don Yaeger the best-selling George Washington’s Secret Six: The Spy Ring that Saved the American Revolution, quoted the bitter words of British spy Major George Beckwith: “Washington did not really outfight the British, he simply outspied us!”

Yet, for all its importance, the story of the Culper Spy Ring was not widely told until recently. However, over the past several months two things have drawn attention to the tale: Kilmeade’s 2013 book and the AMC historical thriller series Turn: Washington’s Spies, which started airing in April. The show is based on a 2006 book by Alexander Rose, who said in an interview that he feels spying didn’t win the war but helped the Patriots “not to lose it,” by providing Washington with “intelligence to help him make important decisions at key moments.”

Locally, the story was better known, particularly after historian Morton Pennypacker started collecting books, papers and other material in the 1920s. Though some of Pennypacker’s conclusions turned out to be untrue—and controversy exists even today about the ring’s membership—he made a critical discovery in 1939.

By comparing handwriting in letters from the spy known as Samuel Culper, Jr. to a cache of documents in Oyster Bay, Pennypacker was able to unveil the identity of a mystery spy. It was Robert Townsend, whose home, Raynham Hall, is now a museum where tour guides in 18th century costumes greet visitors.

“We’ve had a huge increase in visitors” beginning a few weeks after Turn debuted, said Alexandra Sutherland, the director of education. The museum recently installed an exhibit about the ring and programs for children allow them to peek into copies of its codebook, which substituted each letter of the alphabet for another and assigned numbers to certain words and people (Washington was 711). Another of the ring’s hallmarks was the use of invisible ink and only Washington had the liquid that would allow the secret messages to appear, samples of which are also on display.

The general’s spy network very likely had its origins in a tragic incident that started on Long Island: the apprehension of Nathan Hale in 1776. Rose devoted the first chapter of his book, Washington’s Spies: The Story of America’s First Spy Ring, to the tale of the heroic 21-year-old who, after the British took control of much of New York, volunteered to infiltrate enemy lines.

Hale landed by ship somewhere around Huntington—perhaps even in the community now called Halesite. Unfortunately he was caught and hanged in Manhattan. Although he “behaved with great composure and resolution,” according to an eyewitness account that Rose quotes, he did not actually utter the phrase with which history generally credits him: “I only regret that I have but one life to lose for my country.”

Washington regretted the “bad decisions and poor planning” that led to Hale’s death, but he learned from his mistakes. In 1778, he asked Major (later Colonel) Benjamin Tallmadge, from Setauket, to build the highly secretive network that would provide information to Washington. Tallmadge tapped a childhood friend, also from Setauket, Abraham Woodhull.

Woodhull took the name Samuel Culper (later Culper, Sr.) and pretended to be visiting his sister and brother-in-law in Manhattan while actually delivering messages. He soon recruited another Setauket neighbor, Caleb Brewster, whose experience on whaleboats allowed him to deliver messages across the Sound to Tallmadge in Connecticut.

A year later Woodhull recruited Oyster Bay’s Robert Townsend. Townsend was a merchant whose business interests gave him excuses to travel to Manhattan. He became Culper, Jr., a leader of the ring. “He was posing as a loyalist,” said Raynham Hall’s Sutherland. “He was writing for a loyalist newspaper so he could ask the British what they were up to” without arousing suspicion. He also secretly co-owned a Manhattan coffeehouse frequented by loyalists and run by James Rivington, another Culper spy, who was actually the owner and publisher of the Gazette that Townsend wrote for. 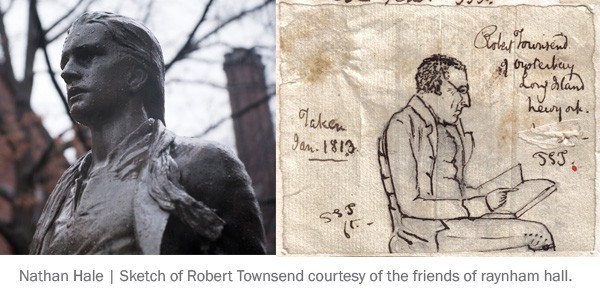 Among the Culper Spy Ring’s most important deeds was uncovering the traitorous actions of American Major General Benedict Arnold, who plotted with British Major John André to turn over West Point to the British. Tallmadge’s reports to Washington saved the day, though he feared that Arnold might know the identities of some of his agents and reveal them to the British. But that turned out not to be the case. All the codes, invisible ink and secretiveness paid off and their identities were preserved.

Another member of the spy ring, Austin Roe, was a tavern keeper in Setauket who acted as a courier to Manhattan, which he visited frequently to buy supplies. “All these people in town knew each other, protected each other and trusted each other, as children and as spies,” said Bev Tyler of the Three Village Historical Society, who leads monthly walking tours dressed as Abraham Woodhull. When it opened in 2013, the exhibit attracted “zero to three visitors on a Sunday. This year, it’s 20 to 40,” he said, attributing the increase to Turn, which has been scheduled for a second season.

Tyler also counts Anna Smith Strong as a spy, though not everyone agrees. “Anna most certainly was in the ring,” Tyler said. But even historians who doubt Strong was a spy can’t resist her story. Kilmeade includes among Washington’s spies a mysterious Agent 355, the Culper code number for “lady.” The wife of a judge, Anna Strong is said to have hung her petticoats and other laundry in patterns on her clothesline to signal fellow spy Caleb Brewster about enemy ships or the location of safe coves.

But Kilmeade doesn’t cement the ambiguous numbers to Strong. Though she might have assisted, “there is no evidence that either she or her laundry ever served their country by gathering or passing along intelligence.” In his book’s paperback version he said, “I reveal five potential women who could have been Agent 355.”

Kilmeade, who cohosts Fox News Channel’s Fox & Friends and hosts the radio show Kilmeade & Friends, grew up and still lives in Massapequa. He became intrigued with the story years ago after reading a book on the subject and becoming frustrated that the spy ring was so little known. In researching their book, he and Yaeger visited CIA headquarters in Langley, VA. To their surprise, they learned that the ring’s methods—encryption, disguises, secret messages—are still used and “are woven into the CIA training today…We believe the Culper Spy Ring was the first CIA. And they believe it, too.”

Rose, who helps write the AMC series, is more circumspect about the ring’s impact. They helped to win America’s independence, he said, but “resources, trained forces, able command and sound strategy” were other keys. A historian and journalist, Rose was born in the United States, grew up in Australia, earned his doctorate from Cambridge and now lives in New York. He discovered his subject “by accident” while reading a biography of Benedict Arnold and searching for more information on Revolution-era spying.

According to Rose, Long Island’s location contributed to the ring’s success. “You had a group of ordinary people doing an extraordinary thing, and they rather fortunately lived in one of the most critical regions of the country. Put the two together and a Long Island spy ring was the almost inevitable result.”

The Three Village Historical Society, 93 North Country Rd, Setauket, has an exhibit called SPIES! How a Group of Long Island Patriots Helped George Washington Win the Revolution. It is open Sundays 1-4pm and by appointment and offers tours, including Walk Through History with Farmer and Spy Abraham Woodhull on Nov 9, 2-3:30pm. 1 Dyke Rd, Setauket. threevillagehistoricalsociety.org, (631) 751-3730

The Ward Melville Heritage Organization offers group programs like “Become a Spy!” for 4th-8th graders and owns three spy-related properties: The Brewster House and The Thompson House, both in Setauket, and The Stony Brook Grist Mill. wmho.org, (631) 751-2244