It pays to dream. At least it has for Cesar Pieri, a recent addition to Jaguar’s England-based design team. Pieri, who dared to re-imagine the brand’s latest star, the F-TYPE roadster, set off a whirlwind chain of events culminating in yet another option for those looking to pounce on a car that’s already impressed the automotive world for some time.
                                                                                                                     
Meet Project 7, a series of sketches-turned-concept that begat a limited-production run, the first from Jaguar’s MI6ish-sounding Special Vehicle Operations division. Inspired by the marque’s iconic D-TYPE racecar, P7 pays homage to Jag’s rich racing heritage and seven wins at Le Mans with some well thought out nips, tucks and chops. Lighter, lower and considerably more aggressive in demeanor, the track-tuned offering also received a noticeable bump in power over previous F-TYPES, with a total of 575 horses being harnessed from its supercharged V8. After a brief West Coast stint at its reins, I’d dare wager it has even more to deliver if tinkered with.

Like the coupe and convertible before it, simply firing up the P7 is an enjoyable exercise in itself and maybe the most auto-erotic fun you could have while at a standstill. Pushing the start prompts a brisk swipe of the gauge needles and unleashes a throaty cackle quite fitting its character. 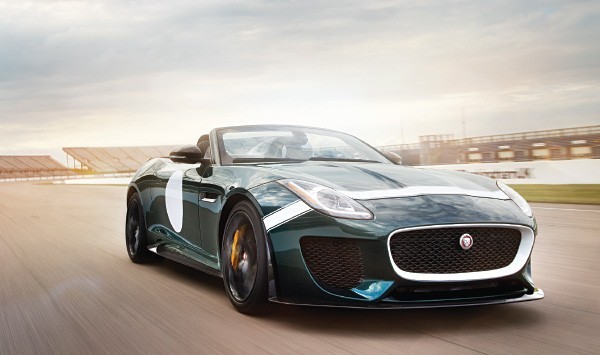 Though styled as a two-seat racer, there is no shortage of proper, bespoke-quality trimmings inside. The seat is noticeably lower than that of its cousins and controls are simple and driver-centric. Like everything from Jaguar’s recent lineup, the cockpit indulges the sense of touch just as much as sight. If a surface isn’t wrapped in buttery-soft leather or Alcantara, it’s probably crafted from aluminum or carbon fiber. No helmet is required for operation, but the aeronautic-inspired switches and toggles had me ready to get my Top Gun on. While much of the trim has been carried over from the standard F-TYPE, this special edition’s racy stitching and color options scream performance.

With a paddle blip and a stomp, the Project 7 is out of the gates like a Triple Crown contender. The 25 additional horses it has over the next fastest model, the F-TYPE R coupe, may sound minimal on paper, but paired with a remapped engine management system their force is thunderous. The upgrades shave off 0.2 seconds for a new naught- to-60 time of 3.8 seconds, but it feels like you’re there in half that. And though the car sits a half-inch lower—courtesy of an even finer-tuned suspension—curves are something that should be approached with respect. Even with traction control and all electronic babysitters on duty, the car’s backend is eager to sidestep should you lead your dance with too much reckless abandon. Still, P7’s steering is connected and precise; with a little self-restraint and proper throttle control, the car dashes and weaves with the athleticism and agility of its feline namesake.

Warning: Plan jaunts accordingly. P7’s menacing new front fascia and D-TYPE inspired fin are finely executed examples of form meeting function. Its removable roof panel however, was more of an afterthought. An automatic convertible mechanism would’ve added 44 pounds. It was nixed in keeping with the racy nature of this beast—keeping dry can be accomplished with the included manual fabric panel, but it’s clearly not the priority.

Those dreaming of their own Project 7 may want to sketch out a plan to order now. Set for a spring 2015 release, only 250 of this fine species will be bred worldwide. Don’t expect them to sit still, that’s the last thing they’ve been built to do.