Female-led kitchens are surprisingly rare, but for these chefs, holding forth at the hearth is about the cooking and their journeys getting there. Nothing more. These aren’t “female chefs.” They’re chefs. Period. 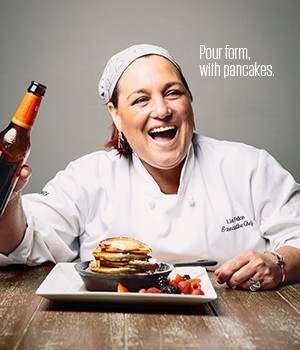 My parents divorced when I was young so my sister and I spent a lot of time with my grandmother. We’d roll out pasta and put a tablecloth on the couch to lay it out to dry. She taught me a very rustic style of cooking—peasant style with fresh vegetables. She never followed recipes. To this day I rarely follow recipes either, I just cook from the heart.

I owned a nail salon for 20 years in Setauket. I had my business at 19, but culinary school was something I always wanted to do. So I hired a manager and, with two kids, went to school.

My first real kitchen job was actually opening my restaurant, Amarelle. This was 2009. We did country French cooking inspired by all the farmland in Wading River. I had to teach myself how to cook on the line; I always worked by myself and even during an internship with The Food Network, I did food styling. This was the big time though. I did everything from production to cooking. It was my baby.

I was doing a catering job in Mattituck and driving back to Amarelle around midnight when a car swerved and hit me. I broke my foot in six places, shattered my heel, broke my ribs. I couldn’t stand, so I couldn’t cook. Then two weeks later, Hurricane Sandy hit. It was devastating. In December, I had to make a decision: Pay my rent or pay my mortgage. I had no choice but to shut Amarelle down.

Two good customers at Amarelle had this gastropub concept and that’s how Brewology came about. This is completely different for me. Every week, my beer director, Terence Daly, will pick a beer and I’ll incorporate it into a meal.

I’m a Long Island girl, so I’m a duck girl. We have the best around and it’s my favorite thing to cook with. I’ve rarely had chicken on my menus. Duck has so much more flavor and the options are endless: I can smoke it, confit the legs, sear the breasts and so on. We’re doing duck pastrami marinated in a smoked lager. We also did a seared duck breast with brioche toast points. It has a sweet yuzu jam—the yuzu came from a yuzu saison from Hitachino.

Signature Dish: A play on a Philly cheesesteak with fine duck slices, beer-braised onions and smoked Gouda on a toasted hoagie. Respect the duck.

If you could cook for one person… My grandmother. She inspired me, but she passed away before I became a chef.

Kitchen Playlist: I never listen to music when I cook. Is that weird? It distracts me. 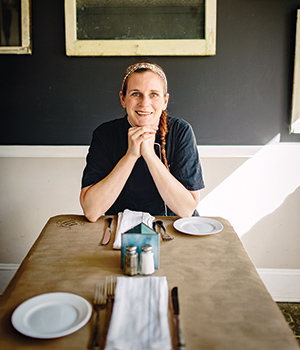 My first job was at the snack bar at Lawrence Beach Club in Atlantic Beach. I was making milk shakes, hamburgers, cheesedogs… Then I went away to school and waited tables during the summer. One of my friends worked in a kitchen and I said I could do that. I know how to cook! The chef knew I was lying. But he liked my attitude and gave me a shot.

I never went to culinary school. You get those moments of doubting yourself: Maybe I would have learned more if… But I had on-the-job training. I remember being so excited to learn small things—making mashed potatoes or rolling a wrap. And I’m still learning every day.

I’ve been an executive chef for six years. It felt like the first four or five years, I was figuring stuff out, but I finally feel comfortable with my food. That sounds weird, and I was definitely happy with my food before, but I have more confidence now. It’s like, ahh! It all makes sense! You’re making the food, it’s going out and someone is eating it. Instant gratification.

I’m a very picky eater—a texture eater. But it doesn’t hold me back from using certain things. I absolutely hate beets, but I think I cook with beets more than anything: pickled beets, grated raw beets, whatever. I’m also a snacker, which is reflected in our menu. We do approachable American comfort food: sandwiches, beautiful salads, burgers, fried pickles. But we also have panseared trout and bucatini with clams, local corn, tomatoes and cilantro. This morning, I picked up curly kale and tomatoes from Organics Today in East Islip. I also source a lot of produce from Invincible Summer Farms in Southold.

When I’m home, I’m eating nothing healthy. [Laughs] Candy. Hamburgers. I could honestly eat a burger every day. I also eat things cold. Pasta right out of the fridge? Perfect. Having a hot meal is almost too much work after a 14-hour day.

If you could cook for one person… My husband, Dennis. Our schedules are so hectic that I can rarely cook for us.

Kitchen Playlist: It can range from Talking Heads, R.E.M and Toots and the Maytals on Pandora to Spanish soccer games. I like to keep it upbeat. 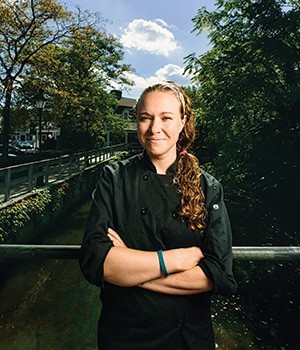 Heather West
West, winner of Season Two of Hell’s Kitchen, was most recently at Schafer’s in Port Jefferson

I was born and raised in Port Jefferson. I bussed tables and made salads at The Village Way as a teenager. My mom got cancer when I was 20 and I cooked to make her feel better. That’s when I started to get really creative and began looking at culinary schools.

I was an executive chef at 24. I was nervous as hell. This was before cooking was cool. It’s amazing how much the industry has changed in the past 10 years. I’ve changed too. My work ethic is the same—but my style is so different. As you learn and grow as a person, so does your identity as a chef. At the age of 24, you’re not who you were at 14. I wasn’t into New Kids On The Block anymore at 24. Well, that’s a lie—I was. And I still am.

I’ve been sous chef at Almond in Bridgehampton and Almondito in East Hampton. I was their workhorse, going back and forth, putting in 16-hour days. Jason Weiner, the executive chef, is the person I learned from the most. If a plate came back and was half-empty, he needed to know why. That’s something that I do now. He actually called the casting directors to recommend me for Hell’s Kitchen.

I have Tourette syndrome, so my parents have always worried about me. They had no idea I was as feisty and confident as I am in the kitchen until they saw the show. The prize for winning was a job as executive chef at the Red Rock resort in Vegas. It was surreal, but I felt like I was signing autographs and meeting people more than cooking—Vegas is a smaller town than you’d think.

When it comes to my cooking, I’m simple. I don’t like to overcomplicate things. I was an art major in school and I always want everything to look beautiful and taste even better.

If you could cook for one person… Jamie Oliver or Tyler Florence. I consider my style similar to theirs—not nearly as good—but I’d love to hear what they would do with what I do.

Kitchen Playlist: Michael Bolton on Pandora. Yeah, I said it.