The sandwich has always been about mobility. It’s something cobbled together with what’s at hand, slung between whatever leftover bread is lying around. So linked is lunch to the sandwich that without the latter the noon break would be little more than a snack. Think about it: It’s probably the first thing you fed yourself as a child and chances are you’ve had at least one this week. Yet as often as we bring stuffed bread to mouth we’ve all suffered through more than a few uninspired creations made up, ad hoc, in line at the deli. Chefs have never paid more attention to the art of sandwich making than now—and believe us, it’s an art. The bread has never been better nor the produce fresher or more local. Time and effort are poured into things like roasting meats in house or making chutney and sauces, those secret pockets of flavor that can take a sandwich to the next level. From a defunct railroad car in Mineola to a quaint café on the North Fork, menus are filling up with new combinations or those with more than 100 years of history. The Breakfast Pulled Pork
Jam, Massapequa Park
The staple lunch of the Carolinas is reimagined for lazy weekends. Co-owner Peter Mangouranes came up with the idea while conceiving dishes for an all-pork food truck that never happened. A nine-pound Berkshire pork butt is brined for two days in sugar, salt and water to infuse moisture and flavor. After that the skin is scored and covered with a wet rub of maple syrup, bay leaves and cinnamon before developing flavor over three hours in an oven. A fork-pulled heap is heated in the pan with more maple syrup and bacon drippings then piled onto a house-baked brioche roll that was buttered and grilled. The meat is topped with two eggs—get them over medium for just the right amount of yolk sauce. It’s all there: Soft and chewy, with the salty and sweet flavors of a good diner breakfast. The Buffalo Blue Cheese-Stuffed Meatloaf Sandwich
Roast Sandwich House, Melville
Each morning a batch of artisanal ciabatta is dropped off at the back door of Roast, still warm from a Queens bakery. Inside, the bread is used for a variety of sandwiches, but none soothe the football soul better than meatloaf infused with Buffalo wing sauce. Ground beef, veal and pork are soaked in a proprietary sauce that includes a touch of sweetness and smokiness. Out of the bath the meat is sprinkled with blue cheese, formed and baked. Meatloaf slices meet the griddle to crisp up before joining sharp cheddar and slices of thick-cut, applewood-smoked bacon. It’s the familiarity of meatloaf with a tangy sauce combined with crisp, pressed bread and rich cheese flavor that makes for comfort food you can hold with two hands. 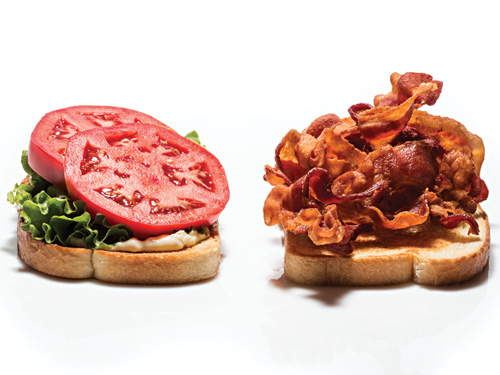 BLT
Relish, Kings Park
The best BLT is a delicate balance of restraint and excess. Chef and co-owner Stephen Cardello learned the difference when he offered the sandwich at his local-food-inspired diner. “The first two years I’d use heirloom tomatoes,” he said. “And I’d throw a yellow and green tomato on your BLT—people would get freaked out a little bit. You take a 75-year-old guy who’s got his BLT and you try to tell him his yellow tomato is ripe and he’s like, ‘No. It’s yellow.’” Cardello went back to the basics: Thick slices of white bread, the Hellmann’s you grew up using paired with juicy, acidic beefsteak tomatoes from Calverton and crispy greenleaf lettuce from Riverhead. And plenty of bacon. “You get nine full slices of bacon—and I’m standing in the window making sure that every BLT goes out with nine.” Cheesesteak
More Steak Than Philly, Baldwin
He was on the Jersey Turnpike heading back to Long Island when Melvin Walker Jr. turned to his best friend and said, “We’re not coming down here to do this anymore. I’m going to find a spot and open up my own.” In the car were 62 cheesesteaks from Dalessandro’s Steaks & Hogies on Philadelphia’s north side, coming home for friends and family. True to his word, Walker opened a steak shop—Philadelphians don’t call it a cheesesteak—and now he fi nds himself back in his birth city every 2 weeks to make the 4-and-a-half-hour trip to bring back 70 rolls from Philly because “the water is different and the bread doesn’t get crusty like a New York Italian roll.” The sirloin patty is also prepared in Philadelphia. The steak is a 12-inch roll layered with white American cheese that melts under hot, glistening chopped steak dotted with griddled onions. Thanks to Walker we’ll all save a ton on tolls. 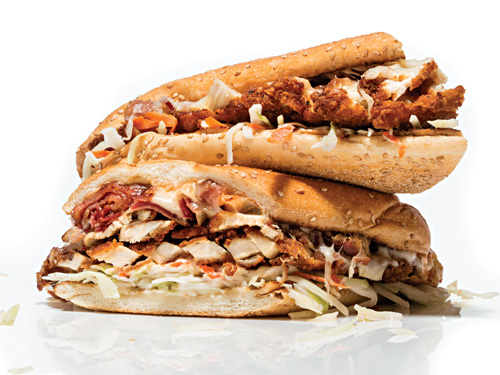 The Gasm
Se-Port Delicatessen, Setauket
When we polled readers to find out their favorite local sandwiches, this one took top honors. Coleslaw covers a garlic bread hero that is topped with nearly 3/4 of a pound of fried chicken cutlet strips, mozzarella and bacon, then finished with Russian dressing. The whole deal is heated until the cheese melts. The bread is pungent with garlic and the house-made dressing adds a sour and sweet element along with the tang of the coleslaw. It’s cheesy, smoky, salty and almost too much for one person to finish. Almost. 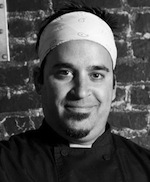 James Tchinnis
Chef/owner, Swallow in Huntington and Montauk
“The last great sandwich I ate was Ronnie’s Tastemaster at Ben’s Kosher Deli in Woodbury. It has corned beef, tongue and turkey served on rye with Russian dressing and coleslaw. They serve a few different kinds of pickles with it. My wife craved their sandwiches when she was pregnant.” 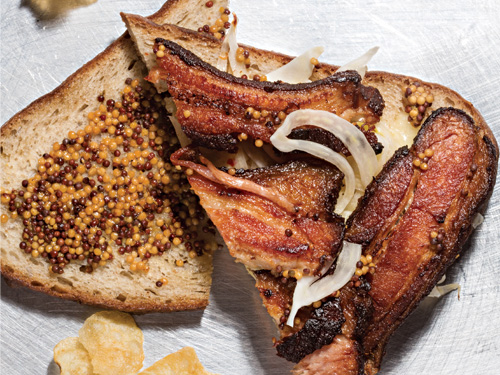 The Hipster Reuben
Cook’s Scratch Kitchen & Bakery, Northport
Even though he has roots in fine dining (first at Four Food Studio and then at Insignia), Josh Cook is just “a Jewish kid from Plainview who likes a Reuben.” His take changes all the rules. It starts with covering heirloom pork belly with his rub for seven days before smoking it on the stovetop for two hours. After a five-hour braise, slices are cleaved o for sandwiches. Pickled fennel replaces sauerkraut and Gruyère stands in for Swiss. And it all gets built between two slices of Tomcat Bakery sourdough smeared with peppery whole-grain mustard. The smoke is there and the vinegary fennel cuts through the pork’s fat and the cheese. Nicole Roarke
Executive chef, J.A. Heneghan’s Tavern in Point Lookout
“The last memorable sandwich I had was a chicken apple sausage topped with an over-easy egg and Swiss cheese on a croissant from the Salt Air Café two minutes away from me in Point Lookout. The croissant was incredibly buttery, yet sturdy, and the sausage had a very snappy casing, so it was not only delicious but it was texturally satisfying.” 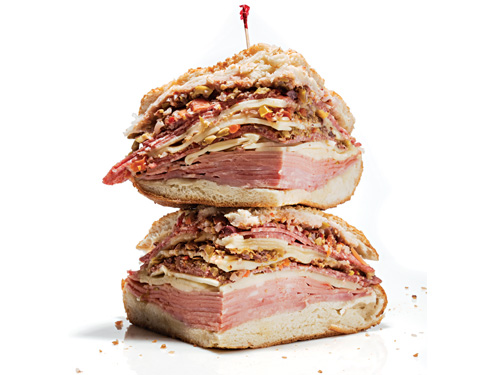 The Muffuletta
Biscuits & Barbecue, Mineola
Sicilians marked their spot in the history of sandwiches in 1906 when Central Grocery’s Salvatore Lupo stuffed a round muffuletta bread with cold cuts, cheese and a flavorful olive relish and started selling it to blue-collar deliverymen stocking the French Market district. Bobby Bouyer, the Louisiana-born, half-Creole and half-Cajun chef brought the sandwich to Mineola and keeps it traditional: A round loaf from a local Italian bakery is halved, then soaked with olive oil. The base is coated with a relish made with six kinds of olives, then the packing starts with layers of mortadella, deli ham, Genoa salami and provolone cheese until the sandwich slice is about 4-inches tall and dense. Bouyer remembers having a slice from Central Grocery: “It was thick and packed with love. It had everything you could want. You just need a cold beer to wash it down and that was lunch and it would hold you over for a while.” Have a seat at the bar for a quarter loaf, then take the leftovers home— it gets better the longer it sits. 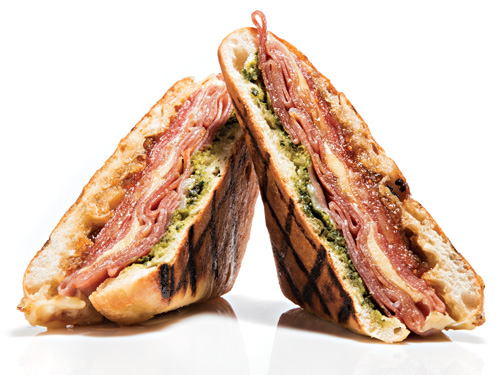 The Pig n’ Fig
The Cheese Emporium by Bruce & Son, Greenport
As great as what is inside this sandwich, the textural contrast of the crispy panini shouldn’t be overlooked. “It’s really the best part,” said chef Scott Bollman, son of the café’s proprietor. Inside is the familiar combination of salty prosciutto di Parma and sweet fig, in this case, a potent jam made using local fruit. The arugula and basil pesto add a peppery creaminess and the whole thing is elevated with the texture of melted, sweet and pungent Comté. Pressed, the cheese melts and the whole assemblage becomes a dense mass. It covers a lot of bases: sweet, salty, crunchy and, for good measure, it comes with chips from potatoes grown in Cutchogue. The Thanksgiving Knish
Press 195, Rockville Centre
After opening the original Press 195 in Park Slope, Brooklyn, sandwich maker Brian Karp found himself standing in the hotdog cart line in lower Manhattan. “The guy in front of me got a knish and stuffed every topping inside of it along with the hotdog,” Karp recalled. “I said, ‘That could be a great way to make a sandwich, just stick everything in there.’” The knish sandwich landed on the Rockville Centre menu shortly after and was paired with roast beef or pastrami. But the turkey take on things hits all the flavors of Thanksgiving dinner. The dense knish, made by Gabila’s in Copiague, is cut, then covered with a house-made roasted pear-and-cranberry chutney. Fontina cheese and sliced turkey make up the middle, the sandwich is pressed for a few minutes and served with a house-made gravy from beef and pork drippings. Kyle Koenig
Chef de cuisine, Topping Rose House in Bridgehampton
“The fried steak torta at La Hacienda in Southampton is served on a nice soft roll with beans, avocado, lettuce, cheese and sour cream. Maybe because the meat is basically chicken-fried steak, which is very close to my roots in Texas, or just that it is pretty good Mexican food, but it reminds me of home. I always wash it down with a Jaritos soda.” The Villa Combo
Villa Italian Specialties, East Hampton
Nearly every deli has an Italian-style hero. But when a shop comes up with one that is ordered up to 250 times a day, there must be a secret. The Villa’s is a house-made dressing with serious roots. “The dressing is very simple and from a recipe that’s probably 40 years old,” said owner Francesco Gardner. The Villa Combo starts with olive oil, white vinegar, fresh garlic, oregano dried in house, salt, pepper and the whole thing is thickened by Romano cheese. Deli ham joins a spicier version made with cracked pepper, fennel, Spanish paprika and oregano. Provolone provides some richness and the vinegar peppers lend some tang. But the dressing brings the right amount of heat from the garlic and oregano and the cheesy saltiness that works well with a rich olive oil.