Charlene was impressed. Her seat was very comfortable; the business class cabin was spacious and airy, staffed by friendly flight attendants who spoke their English with charming, mysterious accents. The landscapes below were spectacular, thousands of miles of what would be defined by real estate developers as wasteland and by world travelers as the pristine beauty of a terrain at once harsh, rugged and inviting. How far from Sands Point she was, here on a plane headed for, of all places, Mongolia.

On the ground at Chinggis Khaan International Airport, the view was no less remarkable. Along with rolling hills and the huge sky from which she just descended, Charlene was greeted by the handsome guide who was to accompany her around a small portion of a vast land only now being explored by the more intrepid of the world’s affluent travelers. Unlike his compatriot flight attendants, the guide spoke the Queen’s English as would be expected of a graduate of Cambridge University, which he was. Once on their way to the hotel, Charlene first heard Mongolians speaking to each other in their native tongue as the guide informed the driver of their destination and engaged in conversation.

Beyond Words
Mongolian must be one of the most ethereal languages in the world. It sounds like nothing else. Unlike almost all their fellow Asians, Mongols speak very softly, as if the words are mere confirmation of some silent communication already exchanged between speaker and listener. Perhaps it is thousands of years of Tibetan Buddhist influence that persuades Mongols that words are superfluous to human interaction. Maybe it is the nomadic lifestyle for which Mongolia is famous that has conditioned them to think and speak to themselves first and foremost. Either way, the aural seduction of this ancient language is jarringly counterbalanced by the replacement of elegant Mongol script with the Cyrillic alphabet, a vestige of the ruthless period of Soviet hegemony that sought to replace Mongolia’s entire history in the span of a few decades. It succeeded all too well, but the winds and whispers have changed; Mongols are recovering their history with a heartfelt joy, as if having stumbled across a sentimental gift lost a long time ago. One they never expected to find again.

A Musical Interlude
They were not going to the hotel after all. Oddly, or so she thought, their destination was a music hall. As the guide explained, Charlene had arrived in Ulaanbaatar just in time to catch the evening performance of the Tumen Ekh ensemble, a group of musicians, singers and dancers who take an active role in preserving Mongolia’s performing arts. During the course of the performance Charlene felt this to be the warmest of all possible welcomes. Tumen Ekh is the country’s most prominent troupe and are authentically faithful to tradition. 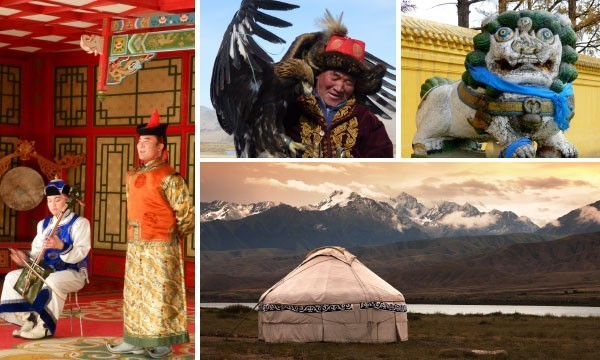 Hearing the extended syllables of urtiin duu, known in English as long song, which features notes held for up to a full minute, and the added feature of shuranhai—vibrato accenting notes—the first-time visitor feels the history of this country in a single tone, sustained, unrelenting. So significant in Mongolian history is long song that it has been declared a UNESCO Masterpiece of the Oral and Intangible Heritage of Humanity.

Another of Mongolia’s unusual vocal styles, throat singing, demands a technique that has the voice emanating from the back of the throat to create low-pitched and high-pitched notes at the same time. Accompanying the singers are musicians playing instruments both common and peculiar that also provide the soundtrack to the costumed dancers who perform ceremonial movements against an elaborate backdrop.

Settling In
This time on her way to the hotel for sure, Charlene reflected on the exhilarating experience she had just enjoyed, the first of many in the days to come. She was staying at the Kempinski Hotel Khan Palace, Ulaanbaatar’s best hotel, a well-managed, five-star property run to the exacting standards of the Swiss-owned Kempinski group. (Well, as much as that is possible in Mongolia where a shaman’s warning can cause an employee to stay home for fear of spiritual retribution.)

Kempinski guests revel in clean and comfortable accommodations, friendly service and excellent cuisine. Finding food palatable for Westerners can be a problem in this land where mutton is the basis for virtually every dish. (Airag, a delicious beverage of fermented horse milk, is another popular item.) The hotel has become a favorite with expatriates because of the quality and variety of the food they manage to create from what’s locally available.

Ulaanbaatar is the capital of Mongolia and the only real city in the least densely populated nation in the world. It is urbanizing rapidly however, thanks to a mining and petroleum boom. At times, economic development can seem to be the only thing moving quickly in a city where traffic has become heavily congested and where newly arrived country people remain pastorally unaware of the heightened pace of the 21st century. Charlene’s guide pointed out the ger camps located on the fringes of UB. (Ger is the Mongol term for a yurt.) In contrast to the tight clutch of gers Charlene saw on the outskirts of UB, she would later glimpse a nomad’s single dwelling alone on an immense plain.

More monumental attractions are found on the enormous Sükhbaatar Square whose impressive buildings include the national parliament and the main post office—a destination popular with philatelists keen to purchase colorful Mongolian stamps. The salmon-pink opera house on the southwestern corner of the square is one of the few beautiful remnants of the Soviet era, which ended in 1990.

Worldly, Otherworldly
Beyond Sükhbaatar Square are such attractions as the exquisite interiors of the Gandantegchinlen Monastery complex and the Choijin Lama Temple Museum, two revered sites that are re-embracing the Buddhist culture previously forbidden by the Soviets. The huge statue of Chinggis Khaan, more familiar to Westerners as Genghis Khan, sitting in front of the Sükhbaatar Square parliament building is immense, but it seems like a toy in comparison to the colossal Khaan monument situated in the mountains east of the city.

Once out of the urban environment, Charlene began to gain a deeper understanding of Mongolia. A capitol usually reflects the extremes of a culture, good and bad, but UB seemed to her a capital not truly representational of the Mongolian ethos, which could be more accurately observed away from the city. This is, after all, a people built on the solitude of vast expanses, and Charlene felt the Gorkhi-Terelj National Park, east of UB, would be more reflective of the value Mongolians place on their connection to the earth.

From her research back on Long Island, Charlene knew it was possible to visit Gorkhi-Terelj as a day trip, but she had decided to stay at the Terelj Hotel—a small luxury accommodation located in the middle of the park itself. Terelj made a fine base from which to explore the park, Charlene found, and she enjoyed the scenery, exploring Melkhii Khad (Turtle Rock) and touring the 100 Monks Cave, an evocative meditation center where holy men hid during the Soviet era.

Getting There
Celebrating its 60th anniversary this year, Juulchin Tourism Corporation, the national tourism office of Mongolia, is one of the oldest in the world. As such, Juulchin knows Mongolia very well and is an indispensable ally in setting up arrangements for visitors whether they’re returning backpackers or first-time luxury travelers. Juulchin is able to organize every detail of a visit for the most demanding of travelers, up to and including use of a private jet to cover the huge country’s attractions and accommodations in some of the most isolated locations.

Mongolia is the type of place where a guide (male or female), car and driver are invaluable assets in making the most of a visit. Companions such as these make Mongolia a relatively easy destination for single women or groups of women and for travelers who simply don’t want to worry about planning. One more note: Americans are among the few nationalities not requiring a visa to visit Mongolia for tourism.

The World’s Best Cashmere
Due to Mongolia’s extremely cold winters, the country’s goats grow a very dense under layer of insulating hairs. The result is the thickest, most luxurious cashmere in the world, all of it controlled by one enterprise, Gobi. Unlike most companies in developing economies, Gobi does not sell its best to foreigners and leave the seconds for the domestic market. In fact, Gobi does not sell its cashmere to anyone, keeping it all for use in its divinely soft shirts, blouses, scarves and blankets. Their factory is in Ulaanbaatar’s Khan-Uul district where an insightful tour is available.