All of this big, blunt food and no nonsense surroundings might sound like an unrefined tavern, yet the 120-seat True—outfitted in bare tables and floors, hanging lanterns and a central skylight—is anything but a rough and ready pub. Unexpected touches not initially obvious mark it as a much more meticulous, sophisticated restaurant than it seems at first glance. The weighted, high-quality silverware is a step above the usual. That fried chicken and waffle dish contains an unusual garnish: deep-fried parsley. The waitstaff seems to be composed of upbeat, seasoned pros—speaking of seasoning, none of the dishes required any. That might be because chef Jason Deleo earned his stripes at some of the Island’s most superior restaurants: MP Taverna, The Brass Rail, Circa and Havana. Now as the kitchen commander at True he’s churning out informal, unpretentious food that often resonates with flavor. 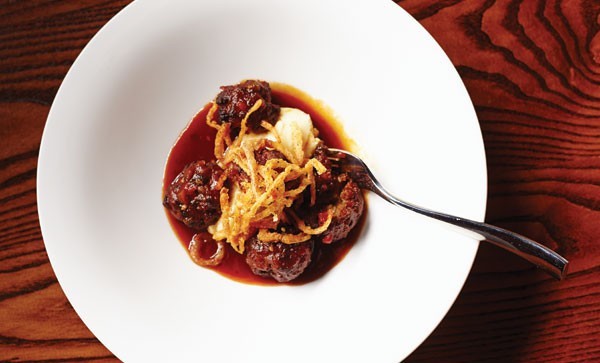 From the “Let’s Begin” section of the menu target the roasted pear and gorgonzola salad featuring two warm, tender pear halves accompanied by a supporting cast of greens, candied pecans, endive, Fuji apples and a touch of gorgonzola with cider vinaigrette ($12). On the “Moving Along” section two bell ringers are the three Kentucky bourbon pork belly sliders ($12) that are crunchy from their cabbage slaw mantle and six Grandma’s meatloaf poppers on a bed of mashed potatoes infused with country barbeque gravy ($14). The Louisiana shrimp and grits ($16) drew mixed reactions at our table with half the diners feeling their Creole tomato cream sauce was too sweet while the other half thought it was just right.

Think pork at entrée time. Of the four main courses sampled the two pork dishes ranked first and second. Those Georgia peach barbeque baby back ribs ($24) were homey, straightforward, fall-from-the-bone treats and the Kentucky bourbon-marinated pork chop ($32) was moist, tender and deeply flavored. The chicken and waffles with maple cayenne drizzle ($24) sported crisp, greaseless breading but far too much of it. Yet, the sumptuous roast Long Island duck ($30) was boosted by its imaginative sides: kale, faro, toasted walnuts and foie gras.

Most of the desserts were anticlimactic. There was a small slice of standard New Yorkstyle cheesecake ($8), dryish chocolate molten cake ($10) and too-sweet pecan pie ($8). The exception was warm, ripe apple crumb pie with vanilla ice cream and whipped cream ($11).