The roots of Halloween tradition reach back into ancient pagan ritual. The Celtic festival of Samhain (pronounced “sow-in” or “sah-win”) marked the end of the harvest season (typically the end of Oct) and the incoming of colder, darker days and was celebrated as early as 7th century BC. Bonfires were lit and animal sacrifices were made in honor of deities and the changing of the seasons, and the Celts would dance and wear the skins in celebration (creating the original sexy animal outfit, which have been dominating Halloween costume contests ever since.) They also believed that at the turn of the seasons, the dead could crossover to the world of the living and that customs, like leaving out food and dressing as ghosts or demons, would appease the spirits.

In 601 Pope Gregory the First instructed missionaries to incorporate local and native customs into Christian ceremonies, effectively making pagan celebrations, like Samahain, Christian, though it wasn’t until the 8th century that the day was given an official title when the Catholic Church dedicated Nov 1 as All Saints’ Day and the preceding day became All Hallows Eve, or Halloween. 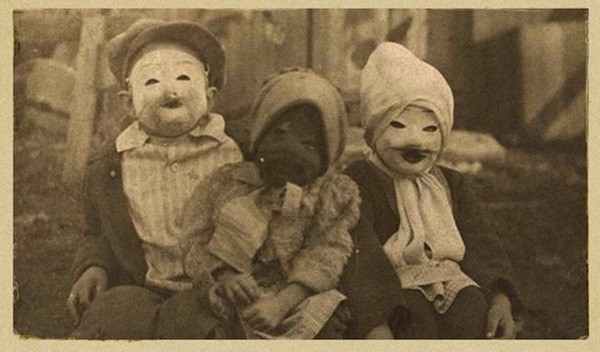 The tradition of trick-or-treating has it roots in Medieval British and Irish custom of “souling,” when the poor would go door-to-door offering prayers for the dead on All Souls’ Day (Nov 2) in exchange for cakes. The tradition of “guising” was also prevalent around the same period. Children would dress in costume and receive money or fruit in exchange for singing or telling jokes. This practice was revived in Scotland and Ireland in the late 19th century, around the same time that many Irish and Scottish were immigrating to America. By the 1950s, trick-or-treating as we know it had become an American institution and today Halloween is the second most commercial holiday after Christmas in the US, with close to $6 billion dollars spent annually on costumes and candy.