Jim Thompson recently unearthed his copy of Charlie Papazian’s The Complete Joy of Homebrewing from his garage. The book, once a regular read, now exists solely as a worn vestige of his former hobby: its cover is frayed and most pages are dog-eared; its spine is more wrinkled than a rhinoceros’ skinsuit. “It was in storage for a long time with the rest of my brewing stuff,” Thompson admits, pouring us a pair of beers. 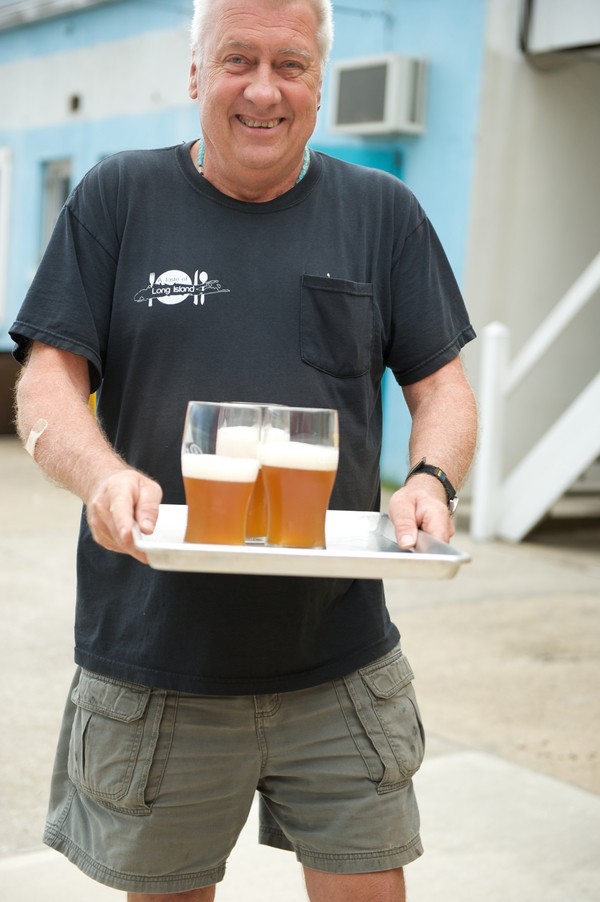 Jim Thompson, co-owner of A Taste of Long Island in Farmingdale, has started a unique brewery in his commercial kitchen. Image: Doug Young

A homebrewer during the ’90s, “when everything was extract in cans,” Thompson eventually shelved Papazian’s influential guide and stopped brewing with friends. “I started a family and life just got in the way,” he explains. The majority of his time now is dedicated to A Taste of Long Island, owned with his daughter, Courtney Citko. They provide a rentable commercial kitchen to small and budding food businesses, hosting roughly 50 rotating clients who “make and package everything from cookies to tomato sauce,” he says. The demand for their 800-square-foot space has only grown since opening in Farmingdale in 2012. “It’s hard for startup food entrepreneurs to find a good built-to-code kitchen in this area. We saw the need for it.”

Christine Goldfuss, owner of Christine’s Sweets, uses Taste to make her company’s eight types of cookies. She agrees with Thompson, telling the New York Times last year, “This has been a dream of mine for a long time. The sticking point was always trying to find a commercial kitchen.” Goldfuss, like many of Taste’s clients, also benefits from the company’s other component, an adjacent specialty grocery store that sells her products. (“One-third of our selection are goods made by our clients,” Thompson beams). It’s my first visit to the 400-square-foot store on Main Street, and my mother is with me, though our agendas are discernibly different. While she indifferently orbits the tiny room on a quest for “something sweet,” my objective is specific: I came to taste some beers from Thompson’s new in-house brewery, A Taste of Long Island Craft Brewery. 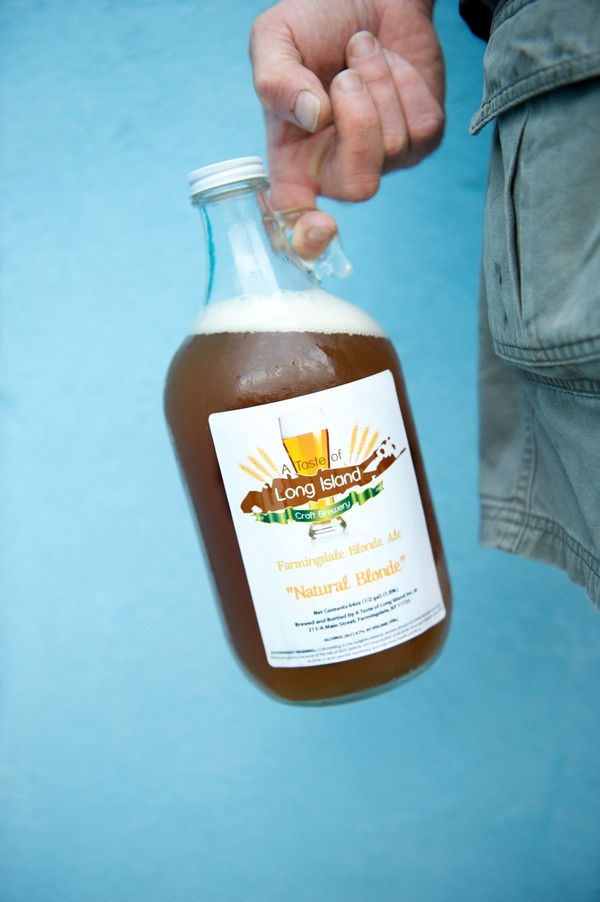 After a hiatus of two decades, Thompson has returned to brewing—though now, with the proper federal and state licenses and equipment, he’s using his commercial kitchen, not his home, as the site to make beer as A Taste of Long Island Craft Brewery. His first release, Farmingdale Blonde Ale, debuted in September. It’s a “clean and crisp beer accessible to all the Miller and Bud drinkers,” he says. This was followed by two variations using Farmingdale’s recipe as a base: Honey Blonde Ale, brewed with honey from Raleigh’s Poultry Farms and Country Store in Kings Park, and Honey Harvest Ale, brewed with cinnamon, nutmeg, allspice, and ginger. Both beers are available now.

Similar to Goldfuss and Taste’s other food-based clients, licensed brewers can rent the kitchen’s new brewing equipment, which includes a 125-gallon mash tun and two 55-gallon brew kettles (fermentators must be purchased by the tenant), to make beer. Thompson is operating his brewery as a hub for alternating proprietorships, defined by the Alcohol and Tobacco Tax and Trade Bureau as an “arrangement in which two or more people take turns using the physical premises of a brewery. Generally, the proprietor of an existing brewery, the ‘host brewery,’ agrees to rent space and equipment to a new ‘tenant brewer.'”

A growing trend in the industry, the alternating proprietorship model is being utilized by small brewers deciding to eschew traditional—and costly—startup methods. In New York City, Grimm Artisanal Ales, Radiant Pig Craft Beers, and Third Rail Beer all rent space and equipment at large facilities to make their beers, while Evil Twin Brewing and Stillwater Artisanal Ales have both become popular brands by brewing as tenants, or gypsies, internationally. Thompson is the first to launch a home for alternating proprietorships on Long Island. As of now, he’s agreed to host three companies (more are forthcoming): 1940’s Brewing Company, Po’ Boy Brewery, and The Brewer’s Collective. This trio will have the opportunity to brew, package, and distribute their beers without the financial risk of launching a brick-and-mortar operation. “They don’t have to find a warehouse and spend $500,000 on equipment, rent, electricity, and so on. But it’s basically like owning a brewery—everything is brewed and packaged by the brewer and they pay their own taxes,” Thompson says.

“It’s not much different than a person coming here to make cookies,” he adds, though he also admits a lot of planning and restructuring was needed to accomodate the new endeavor. Thompson converted the building’s narrow basement into an area for storage and fermentation, for example, and it’s already stuffed with ingredients and equipment. He estimates tenants will brew at Taste “for only three or four years before opening their own brewery,” though, “so we’ll have the space to keep adding new brewers to the roster. I’m already getting tons of phone calls. I really think this can become the first launchpad for startup breweries on Long Island. We’re like a group of pioneer brewers,” he says.

While Thompson is confident of his brewery’s chances for long-term success, he’s still uncertain of an optimal setup to serve beer at his store. He’s using a kegerator with three drafts now, but already anticipating a flood of forthcoming beers from himself and his clients, he’s planning to upgrade to 10 drafts before Christmas. Another uhhhhhhh is the lack of seating. Thompson is selling beer to-go in 64-ounce growlers and 22-ounce bottles, but serving pints on-premise with only one table and two chairs won’t exactly draw a sizable crowd. “I have a lot of decisions to make eventually,” he says. “For now, though, I just want to get all the kinks worked out with all the brewers coming in. That’s the main focus here. We’re gonna be making a lot of beer.” 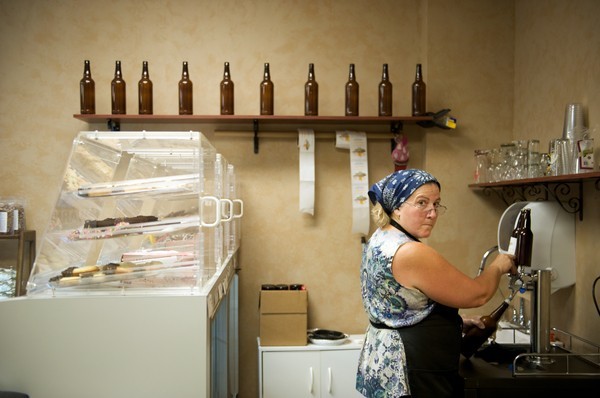 After we taste Farmingdale Blonde, deliberately more refreshing than complex, Thompson pours me a beer from the second brewer to launch at Taste: Charles Becker, owner of 1940’s Brewing Company. Becker, a homebrewer from Old Bethpage, is focusing on German styles with his new company. He started brewing at Taste in…