The first thing to know about the ukulele is it’s not a small guitar. Maybe that’s obvious but ukulele instructor Mark Michaels says it’s a common misconception.

The ukulele or uke as it is often known, is a member of the guitar family. The small string instrument developed in Hawaii in the 19th century, has only four strings.

“People come because they heard it was easy,” Michaels who owns the New York Ukulele School said.

And it is easy to play, according to Michaels whose students range in age from 5 to 84.

“Ukulele is for everyone, you don’t have to be musical to play it,” Michaels said. 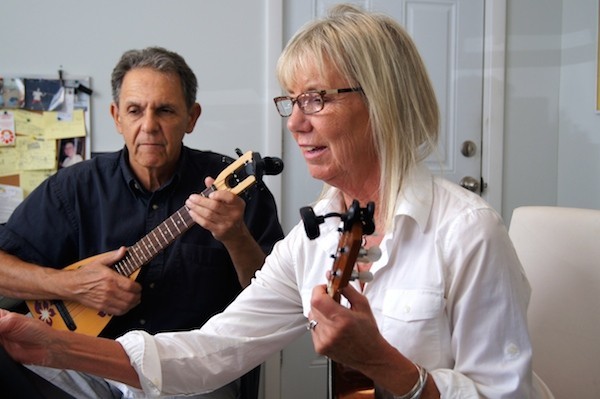 The nylon strings make the ukulele easier to play than a guitar and when strummed properly the uke gives out a soft, sweet sound. Michaels has taught students to play the ukulele in Long Beach and in New York City since 2007. He was teaching guitar at a school in New York when the guitar school kept getting requests for uke lessons. Michaels learned the uke, eventually opening up the New York Ukulele School.

He now gives group and individual lessons seven days a week. While Michaels said many of his students are senior citizens he also teaches children and a few Hofstra University professors. He even teaches students in France, Switzerland and Norway through Skype.

Massapequa elementary school teacher Deborah Rogers began taking lessons from Michaels about a year ago and now comes almost every week for an hour lesson.

“We go to Hawaii a lot and I saw the uke and thought this is cute.”

Playing guitar is on her bucket list and the uke has let her ease into it with Michaels planning to split up her lessons between the two.

“Many people just fall into it,” Michaels said.

Like Michaels who wrote music education books back in the 1970s, then taught guitar and now gives uke lessons.
Related Content
Motion Ocean Tunes Their Music to Smiles