“Fuck, is this good! Holy shit! I can’t believe this! This is fucking great!” Dave Attell yells, gracing the stage to greet a rambunctious crowd during an episode of Comedy Underground with Dave Attell. After surveying the audience and astutely referring to two nearby dudes as “Neil Diamond meeting the James Franco character from Spring Breakers,” the sardonic and always-scruffy stand-up doesn’t waste any time to kickoff the Comedy Central show’s touted proclivity for uncensored comedy. He introduces Ron Jeremy as a warm up act, who offers a short profanity-laced “dick joke”about a farmer, his son, and a donkey. When the corny punch line only elicits a subdued response, Attell playfully interjects: “What are you guys, vegan? That’s a great donkey joke!” This receives a louder reaction of both laughter and applause.

While prepping for my interview with Attell, I re-watched several episodes of Comedy Underground and noticed similar instances of this intimacy and off-the-cuff interaction, both of which seem absent in most of today’s stand-up comedy on television. The show attempts, and succeeds, to capture the gritty realness of a live nightclub performance. Refreshingly eschewing a gigantic theater for a tiny stage set against a brick wall in a cramped basement. The latter type of venue, Attell has said, “has kind of been forgotten in a way.”

As host of Underground, Attell introduces “uncensored late-night stand-up from some of the dirtiest comedians working today,” including Jeff Ross, Robert Kelly, Triumph the Insult Comic Dog, and Jay Oakerson. There are 50 video clips from the series’ eight episodes on Comedy Central’s website. They are filthy bits but they’re also smart and hilarious bits. 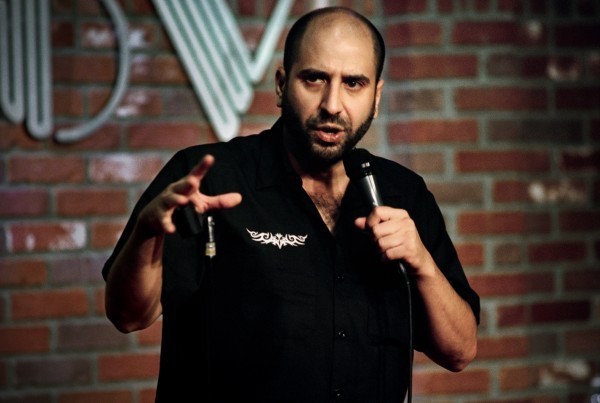 Long Island Pulse: You’ve taken Comedy Underground on the road now.
Dave Attell: Yeah. The live shows are an extension of the Comedy Central show with the same vibe: raw, unfiltered, and dirty stuff for the real comedy fan. I host the show and bring out about three or four comedians like Jay Oakerson, Ari Shaffir. They each do 15-20 minutes of great, hard jokes. All the jokes coming out from these young guys, they have real balls. And they also talk about balls. A show like this is one of the last places for unrestrained comedy—to push as far as you can. You can’t say dirty shit on network television, and sometimes you can’t even say it in the clubs. Everything is PC now.

Pulse: Are we too sensitive?
DA: It seems to be getting worse. These younger crowds, they have this sense of moral outrage that they have to express live. They’ll groan at a Civil War joke. Really? Is it too soon for a Civil War joke? Guys will even groan at sex jokes now. The idea of a crowd has become different. Everyone has their own agenda. It’s difficult for people not to take out their phones and take pictures. They feel like if it’s happening to them the world needs to know about it. That’s not how comedy was when I was growing up. I never know what to think. Maybe I’m over thinking it.

Pulse: We’re not talking about your crowds, though, right?
DA: No, no. My crowds are different; they’re older; they get it’s a joke. You can talk race and sex and they know it’s not a hate speech. I love my fans. They are the last roundup of the good crowds, the late-night crowds.

Pulse: Do you remember your first show?
DA: Oh yeah. It was at Governor’s in Levittown. I’m originally from Queens, but I like to think of myself as a Long Island guy; I was raised in Rockville Centre. So I went on [at Governor’s] and immediately forgot all my material. And I’m pretty sure I wet myself. I was nervous and I bombed. I remember going home and running into my bedroom and hiding under the covers. My mom came in and said, “You could always try BOCES.”

Pulse: One of my favorite Insomniac episodes was when you went to your mother’s house.
DA: That was something we did in real-time. We never had any money to fly anywhere for the show. We had these one-hour specials to do so I said, “Let’s just film on Long Island. No one does that.” So we went through her house on all the way to Brooklyn. And this was old Brooklyn—well, older Brooklyn. No bistros or pug rescues here. It was still kinda sketchy.

Pulse: Was that the house you grew up in?
DA: No, that house I bought for my mom.

Pulse: That ruins my next question.
DA: Which is?

Pulse: I loved it. Is it going to come back for a third season?
DA: I’m trying to get the rights back to start the show again. Showtime still has them. Now that we live in a web world, it’d be perfect to do some digital download shit. But the network still has the rights. We’ll see.

Pulse: No pun intended.
DA: Of course not.

Pulse: You don’t do digital porn?
DA: I’m not that into it. I’m a sad old man. Like, I don’t really use Twitter aside from posting pictures after a show. I don’t think Twitter works for me, but we all have to do it now. Now you spend a lot of time promoting the show and doing podcasts. Everyone has a podcast now. A guy who was a magician, yeah, he has a comedy podcast now. What happened to just getting on stage and doing your act? It’s a brand, man! I just like doing my stand-up. I don’t think the majority of people give a shit about what I have to say outside of a show, if I’m eating some chips on my couch. Some people are out of control: They’ll announce they’re leaving Twitter—on Twitter. [Coughing]

Pulse: American Spirits, right? My girlfriend smokes them, too. The yellow pack.
DA: I smoke the gold pack. But the guy behind the counter never knows the gold one. Honestly, the colors are just weird. They really should have animals on the boxes. Gimme the one with the eagle, or the one with the bear. The natives know their wildlife, so it would make sense.

Pulse: Getting back to Comedy Underground: I know you prefer clubs to theaters, so why run a venue like The Paramount, which is the latter?
DA: I’m definitely a late-night club guy. But this a good test to see if this type of show—a show that’s supposed to be intimate and dirty—can work in a theater with a bigger crowd. I think it can. Long Island likes it a little dark and raw. We’re sarcastic people. I built a thick skin from growing up here.

Comedy Underground with Dave Attell plays at The Paramount on Friday. Tickets were available at time of publication.