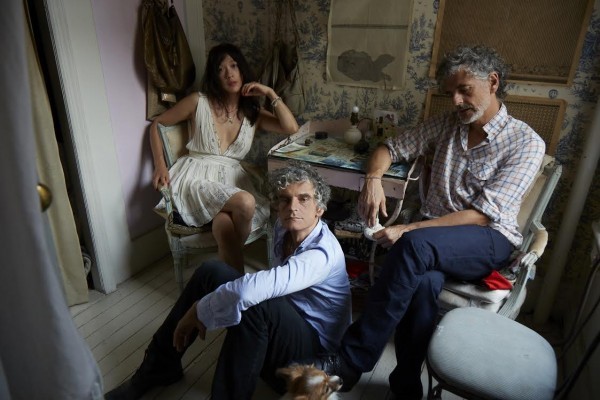 New-York based Blonde Redhead fans, and those returning to New York City for turkey day, are in for a pre-holiday treat when the local indie dream pop trio perform two shows at the Bowery Ballroom. Japanese vocalist/rhythm guitarist Kazu Makino and Italian/Canadian twin brothers—guitarist Amedeo and drummer Simone Pace—have been making music together for 21 years. It seems like just yesterday that art student Makino randomly met the Pace brothers at an Italian restaurant in New York City. More of a noise rock band in the beginning, the band caught the attention of Sonic Youth drummer Steve Shelley and he produced Blonde Redhead’s self-titled debut in 1995.

The last decade has seen the trio go a quieter, but just as experimental, route. While 2010’s dreamy Penny Sparkle was more electronic and synth-based, Blonde Redhead’s latest album, Barragan, was recorded live in the studio with analog paraphernalia for a more stripped down sound. Barragan is the Spanish word for warrior or brave young man, but Makino said they got the title elsewhere: “I didn’t know that was the meaning, but we got the inspiration from the Mexican architect Luis Barragan.” The Modernist architect, known for his clean lines and use of raw materials, was also interested in color, emotion and serenity so one can see how his work inspired the trio’s latest effort, which was recorded with producer Drew Brown (Radiohead, Beck). Barragan would likely have appreciated the acoustic, flute-laden title track and stand-outs like the quirky “Cat on Tin Roof,” the shoegaze-y “No More Honey” and the propulsive “Dripping”: “I saw you dripping sunlight/ I saw you dripping moonlight.”

Let yourself be inspired by the creative sounds of Blonde Redhead at the Bowery Ballroom before meeting up with the relatives on Thursday.

“We’ll be playing most of the songs from Barragan except one or two,” said Makino. “The rest are a mix from from our other albums—for some reason, we are not able to play covers.”