Sometimes a design simply needs more space to breathe. That was the case when Huntington-based designer Kate Singer was asked to reimagine a 1960s-era Hewlett Neck interior, including a kitchen, living room and butler’s pantry. The home, which the owners bought from their great uncle, initially had all three elements but they were smaller, closed off and not something a family with four young children found useful. Singer added space, while keeping a cohesive feel, and managed to save some important period details along the way.

The gut renovation focused on the kitchen, which nearly doubled in size to 350 square feet, not including a new sunroom that floods the space with light through a pair of double French doors. The generous island anchors the space, giving the cook room to prep vegetables while children have a place to work on their trigonometry homework. “I wanted the island to stand out a little bit, more like a piece of furniture,” Singer said. “It’s topped with a contrasting countertop to add depth and to anchor it to the middle of the room. The toe kick is set back so the base molding looks like legs.”

Beyond that are Windsor chairs, original to the home, around a pedestal table for informal family meals. The white cabinets bounce light off the walls and allow the island to command attention. 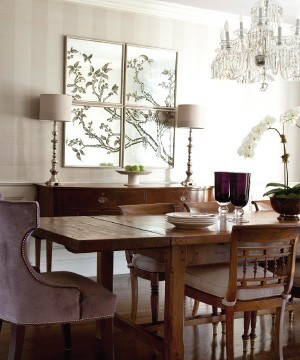 The existing butler’s pantry was replaced with a new one that guests see. “There is certainly a lot more thought and design that goes into these butler’s pantries because your company is more apt to be in there while you’re getting them a glass of wine,” Singer said. The space uses the same color cabinets as the kitchen to keep the look cohesive while storing stemware, china and wine.
But when it comes to entertaining, it can serve as a bar during cocktail hour, a dessert buffet after dinner or an espresso station after that.

The dining room features the greatest mix of periods, with a refurbished chandelier original to the house that sits above a modern farmhouse table. 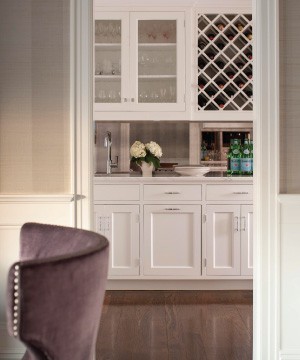 Joining the two extremes is a decorative but subdued server that helps manage dinner parties with plenty of countertop surface and storage below. “The server bridged the gap between the table and the ornate chandelier,” Singer said. “It’s classic and traditional like the chandelier, but it also works with the table, which is more rustic.”

The design of the first floor is rooted in nature, taking cues from the setting just off the South Shore. Singer played with the color of the organic grass cloth on the walls by using one that shimmers a little. Similarly, the mirrored artwork above the server is at once a nod to the glamor of the chandelier but made low-key by the tree branch painted on it. And the velvety purple chairs around the table work because the classic shape tempers the risky color. Thus the total effect is one that ebbs and flows, moving the eye around the room to embrace the layers of time, texture and space.