Franklin’s built like a wrestler (which he was at Kennedy High School) and carries himself with that “Strong Island” ease; he has an everyman’s confidence and joie de vivre, an easy smile and a warm handshake that belie the fact that he’s one of the world’s most successful movie producers. As we sat alone over lunch at the Whale’s Tale in the West End, whipping winds and driving rains brought back memories from storms of, well, biblical proportions. Franklin raised a glass in gratitude.

“The irony wasn’t lost on any of us,” said Franklin, discussing his time at the helm of Noah, which was partially shot at the Planting Fields Arboretum in Oyster Bay that fateful October. “Fortunately for the production, when the storm came, we were all but done shooting in Oyster Bay and were then shooting indoors. We had to dismantle the top third of [the set], but the Ark wasn’t damaged at all.”

Sometimes it’s better to be lucky than good, and Franklin was both. With production shut down but more or less on track, Franklin had to quickly pivot and deal with putting his life, and the lives of others, back together. “I live in Long Beach but it wasn’t only me,” Franklin said. “A lot of our crew was affected. It was definitely a wild time, a very hard, difficult, intense production. But it was a bonding experience. We came together and supported one another.” 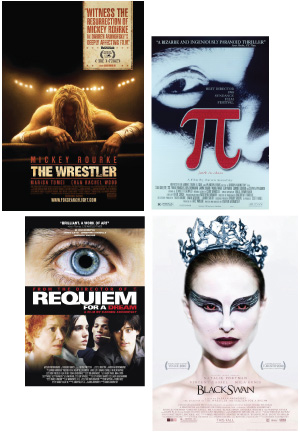 Similarly, Franklin steers the creative ship through diverse waters by both adapting to circumstance and holding fast to his core principles. Not unlike Noah, he’s learned to plan and act at the same time; it’s what a producer does. And going from the darkly intense, claustrophobic and tightly budgeted Black Swan to the gargantuan, Paramount- backed Noah, put Franklin in a challenging position. Unfazed, he relied on the skills that got him there to see the project through.

“You gotta get people to the starting line,” Franklin said. “And once you do that, you gotta get ’em to the finish line. And you gotta manage the process the whole way through. It’s being a foreman. It’s putting out fires. It’s anticipating those fires and putting them out before they start. It’s managing a lot of personalities and keeping everybody headed in the same direction.”

When it was released in late March of 2014, Noah won the weekend at the box office, hauling in $43 million domestic. Since then, it’s grossed over $300 million worldwide. For a time, it also turned the Franklin/Aronofsky juggernaut into a lightning rod. Aronofsky’s libertarian take on the story of God’s chosen “prepper” was scrutinized by everyone from the religious right to studio execs—all of which Franklin himself had prepped for, and welcomed.

“Any time you’re dealing with religion, it’s going to be controversial,” Franklin said. “And any time you’re dealing with that type of money, understandably, you’re going to have to be responsible to someone. That’s part of the managerial process: Communicating with the powers that be while at the same time battling to protect the vision and the fi lm we set out to make.”

In the current creative climate—one in which cable TV is king and big name actors are willing, even eager, to cross over from big screen to small—producing any movie, let alone a profitable, compelling one on a grand scale, is something of a miracle. And while Protozoa has recently cut a development deal with HBO, Franklin’s faith in film is undiminished. It comes from his cinematic upbringing, anchored in the classics from our generation.

“I didn’t study (film) in college, but I always had a passion for film,” said Franklin of his movie loving roots. “It’s so vast. Sergio Leone, Once Upon a Time in America. Mel Brooks, Young Frankenstein. Rocky. Of course there’s Goodfellas and the Godfather. Kubrick and Spielberg. We grew up with movies like E.T. and Close Encounters. We’re filmmakers. We love the idea of TV, but I don’t think movies will ever be dead. There are certain stories that warrant the big screen, the big sound and the full experience. We’ll always be making movies.”

It’s this type of commitment that’s been part of Franklin’s skill set from the beginning, when he took his communications degree from Ohio State and bolted for a fairly brief, ambivalent stint in LA, then returned to New York to take an unpaid assistant production gig on a little film called Pi because he simply “loved the script.” Pi became the innovative cult classic that launched Aronofsky and Franklin to an enduring collaboration in which they both find creative safe harbor and the
courage to take calculated risks.

“I don’t think you can worry (about failure),” said Franklin. “If you don’t risk it all and put it all out there because you’re worried you’re going to fail, then I think you’ve failed already. Then you’re not taking the chances you need to take to make a great film. You have to go for it.”