When the Disco Biscuits (slang for Quaaludes) first formed at the University of Pennsylvania in 1995, the trance-fusion foursome coalesced around the mid-90s jam band scene, which featured the Grateful Dead and Phish. But, unlike other college bands, TDB saw an opportunity to grow within the genre. Bassist and founding member Marc Brownstein has been a part of the evolution and continues to pursue innovation with TDB.

“After about two or three years of doing what we were doing, we realized that if we were going to be a part of the explosion of the genre, we were going to have to do something that was unique,” recalled Brownstein. “We had been listening to electronic music and it very naturally started to seep into our music. I don’t think we set out with an intention. It just kind of happened.”

Brownstein, co-director of HeadCount, an organization that encourages millenials to register to vote at concerts, grew up in New York City and summers in Long Beach. “We ended up being a jam band running an electronic festival up in the Northeast and it was really good for us because we’re able to reach out to bands across many different scenes. We sort of ride the fence between sounding extremely hippie-ish one moment and extremely electronic the next. And we never know what it’s going to be.”

TDB’s current lineup consists of three founding members/vocalists: bassist Brownstein, guitarist Jon Gutwillig and keyboardist Aron Magner; along with drummer Allen Aucoin, who joined in 2005. The foursome usually converts its epic live jams into studio versions for its albums but 2010’s Planet Anthem, the quartet’s first release to hit the Billboard Top 200, was produced entirely in-studio. While Brownstein refers to Planet Anthem as their Sgt. Pepper’s, most of TDB’s albums, including the latest, 2011’s Otherwise Law Abiding Citizens, take listeners on an improvisational journey incorporating various elements into a base of jamtronica.

“If you look through our whole songbook, you’ll see the evolution of music history. In our earlier years we would play a lot of jazz songs. But you can track music from the beginning of classical through jazz and all the way into early rock ‘n’ roll, jam, progressive rock and modern electronic as well.” 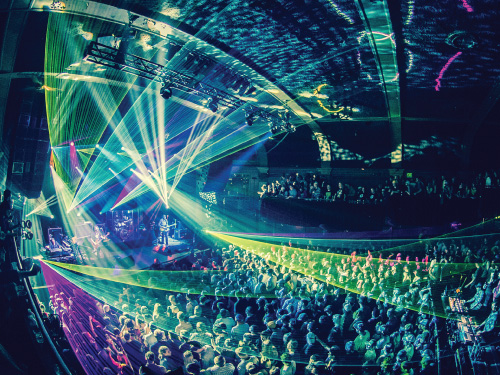 Something tells us there might have been some psychodelia going on at this show.
Photo by Dave Vann
In order to fully experience The Disco Biscuits live, it’s best to attend a three-night run. The average show may be three-and-a-half hours long, but that’s not nearly enough time to reveal the wide range of styles, tempos and tones explored. Every show is different, building on the previous one. “We start a lot of songs and don’t finish them until the last set of music when we wrap everything up that we haven’t played. It creates this vibe where we have closure every week.” TDB recently weaved “Electric Avenue” and “Don’t Stop ’Til You Get Enough” into their set—fans are always excited to find out how the marathon will end.

While ideas for a new album are being discussed and Brownstein is also working on a new EP with his electronic act, Conspirator, TDB will be releasing a vinyl edition of a set of classical music they performed in 2003 in Tennessee. The Classical Set consists of both original compositions and inventive arrangements of well-known songs.

“We nod heavily in our composition to classical music. The day of the performance we rode in on a hot air balloon, landed next to the stage, got out and played a set of Mozart, Tchaikovsky, Grieg, Rossini and others. We arranged it for electric guitar, bass, piano and drums but we’re playing them classically. Some of these songs don’t even have drums on them, but we’ll put a beat under it. It’s unbelievable because it almost sounds like a studio album.”

In addition to classical, the encyclopedia of music that is the Disco Biscuits’ repertoire ironically includes disco itself. When the band started out, the uninitiated would show up wearing afros, stilettos and disco suits assuming that it was disco night. They were quick to point out that they were a jam band that didn’t even like disco. “It was really uncool music to like. It took years and years of cultivating for me to understand disco.” Twenty years later, the godfather of the genre, Giorgio Moroder, is spinning tunes on the last night of the City Bisco Philadelphia run in a nod to the 78ers, those TDB fans that have adopted disco as their favorite style and worship the music of the summer of 1978.

“The whole thing has come full circle. Oddly enough, the more I listen to nu-disco, which I love, the more I realize the similarities between it and the kind of improvisation that we do—which helps explain why our fans have adopted disco in their style of electronic music. We’re trying to move with the times, allowing our version of improvisational jam band music to be influenced by the disco house that’s in France right now, or the deep house that’s in the UK. Our goal is to incorporate those influences smoothly and with class into the genre of music that we’ve created over the last 20 years.”

The Classical Set is a limited edition release pressed on vinyl and includes a bonus track and a digital download. The release date is Nov 28. Join the Disco Biscuits on their New Year’s Eve Run at the Best Buy Theater in NYC on Dec 29, 30 and 31.