The Long Island Rail Road is used as a daily necessity for many Long Islanders who commute to the city for work, but its place in our region’s history is significant as well. Trains helped transform open land into fertile farms, then turned farmland into suburbia. They colonized the middle ground between north and south shores and, along the way, spawned such colorful characters as Mile-a-Minute Murphy, Dashing Dan and Dashing Dottie.

Sure, Robert Moses and the highway system he built in the early 20th century shaped Long Island, too, “but the railroad goes back many years before that,” said Michael Charles, the Long Island Rail Road’s official historian. The railroad, he said, “led to the development of areas that were fishing villages and farms into suburban and nearly urban areas.”

But that was not the intention, at least not at first. In fact, the original Long Island Rail Road Company was not even conceived to serve Long Island. It was built to provide the period’s fastest route between New York and Boston. Rail links from South Carolina to Brooklyn already existed. However, the technology for building tracks over the rivers of Connecticut wasn’t advanced enough yet. The idea was that people (and, more importantly, documents, money, packages and other goods) would travel by rail from Atlantic Avenue to Greenport, board a ship to Stonington, CT, then take another train to Boston. The LIRR’s Main Line, as it is still called, traveled mostly through the fl at, empty middle part of the Island. 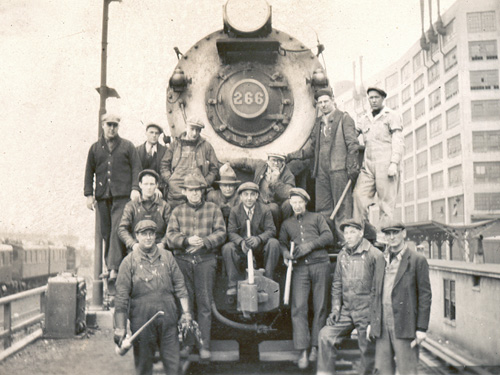 “It was basically a three-seat ride,” said Don Fisher,president of the Railroad Museum of Long Island, which has locations in Greenport and Riverhead. The journey took 11 hours, but that was fast compared to riding a horse or stagecoach. “For those people, it was like rocket travel,” Fisher said.

Though the LIRR was chartered in 1834, there were delays in completing the tracks (no surprise) and it didn’t start operating until 1844. Only four years later, improved technology allowed tracks to be laid on bridges over rivers in New England and the Boston link was forever lost. “That was the end of a profitable Long Island Rail Road,” said Fisher.

Among the famous names connected with the LIRR in those days was Cornelius Vanderbilt, an early trustee who also provided the steamboats to Stonington, and Valentine Hicks, a founder of Hicksville, who was one of the original investors and the LIRR’s second president.

Hicksville was a major stop on the Main Line. In fact, it was the eastern terminal from 1837 until the track work beyond it resumed in 1841, said David D. Morrison, a retired LIRR branch manager who has written several books about the railroad’s history.

In the 1800s and the first half of the 1900s, the train transported more cargo than people. “It helped Long Island to thrive agriculturally, taking potatoes, cauliflower and other goods off the Island,” Morrison said. (And it brought ash and horse manure back to fertilize those crops, Charles noted: “It was very green in that sense… ecologically correct.”) During World Wars I and II, Morrison said, the LIRR “transported a lot of soldiers and planes and plane parts,” made by companies like Grumman and Fairfield.

There were a few small regional train companies operating even before the 1834 charter and from 1850 to around 1880, there was competition. Among the companies operating then was the Central Railroad of Long Island, founded by Alexander T. Stewart to bolster his creation of the village of Garden City. The rails eventually extended to Babylon before the company was absorbed by the LIRR in 1876. 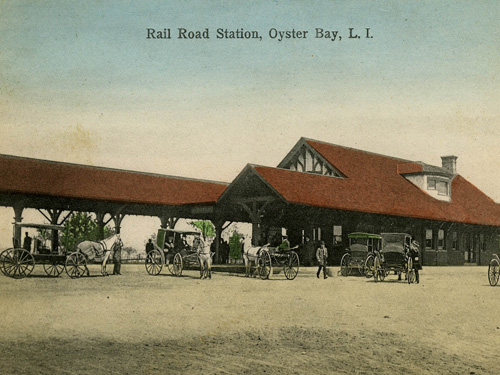 The South Side Railroad of Long Island was another competitor and stretched from Hunterspoint Avenue in Queens to Patchogue. Its routes became part of the LIRR in 1879. In 1897, the LIRR made one of its best moves. It hired Hal B. Fullerton, a 40-year-old business executive, to lure more visitors and settlers to Long Island, which would produce more train users. During the next 30 years Fullerton published dozens of books and pamphlets extolling Long Island as a great place to visit or settle, took thousands of photographs showing off its beauty, rigged colorful promotional events and started two experimental farms to demonstrate how fertile “the blessed isle” could be. “He was a marketing genius,” said Charles.

The most famous stunt he engineered was arranging to have Charles M. Murphy, a national cycling champion, follow a specially outfitted steam engine and coach at the then unheard-of speed of 60mph. The coach shielded Murphy from wind, and planks laid between the tracks allowed him to pedal smoothly. On June 30, 1899, he covered a mile near Farmingdale in 57.8 seconds, according to Charles L. Sachs in his book on Fullerton, The Blessed Isle. Press from around the world covered the ride of “Mile-a- Minute Murphy,” which rewarded the LIRR with “wild public relations value.”

Fullerton took about 10,000 photos in all and about 2,500 of his glass-plate negatives now belong to the Suffolk County Historical Society in Riverhead, according to the society’s reference librarian Wendy Polhemus-Annibell. During his tenure as chief Long Island promoter, Fullerton also teamed up with President Theodore Roosevelt, who helped him publicize his farm program. Train cars full of reporters from New York followed Roosevelt on his visit in 1910 to the farm in Medford, followed by a car ride to another farm in Wading River. 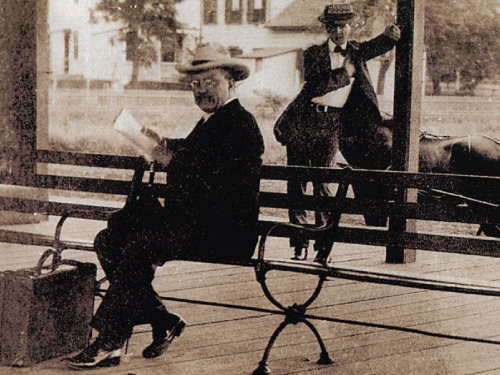 “Theodore Roosevelt loved traveling by train,” said John Specce, president of the Oyster Bay Railroad Museum, which has a storefront in the village. Specce and his group are currently restoring the defunct train station (built in 1889) that Roosevelt used when he traveled from his home, Sagamore Hill, to Washington, D.C. The railroad museum is also restoring an old steam locomotive, a boxcar, two cabooses and other equipment including a turntable that rotated trains so they could head back west.

At the beginning of the 20th century, the LIRR became part of the Pennsylvania Railroad. Aided by tunnels under the Hudson River, the LIRR grew—and then the Pennsylvania Railroad cut it loose in 1949, leaving it to flounder financially. In 1955, the last steam locomotive ran on Long Island, replaced by electric and diesel trains. By 1965, New York State came through with a plan to save the railroad from its financial difficulties and eventually it became part of the Metropolitan Transportation Authority.

Meanwhile, returning World War II soldiers and their families had started moving out to Long Island and, in the 1950s, images of Dashing Dan and Dashing Dottie (added in 1963), began appearing on cars and on timetables. The age of the commuter was upon us. And hasn’t left.