With all due respect to the Colorado Rockies, the Canadian Rockies offer some of the most stunning mountain scenery in North America and some of the best skiing and riding in the world. Up north the mountains are more rugged than their sister sites to the south in Colorado and Utah. Thousands of glaciers feed mountain lakes so brilliantly blue the water (when it’s not frozen over and covered in snow) could pass as an import from the Caribbean. Canada’s resorts get truly unbelievable amounts of snow—up to a mind-boggling 45 feet or more at some of the most snow-blessed resorts. But this is all like saying New York is the greatest city in the world— the question remains: What’s the best part of the best?

The epicenter of Rocky Mountain paradise is a core of mountain ranges north of Idaho and Montana along the northwest-southeast border between British Columbia and Alberta. Weaving amidst the peaks and valleys, a number of genuinely world-class ski resorts are strung out like pearls along a powder highway. The most logical entry point to that alpine utopia is Calgary. It’s Canada’s Denver: An urban gateway just east of the mountains and home to a major airport a little over five-hours direct from New York. And with currency exchange rates the best they’ve been in five years, now’s the time to go. 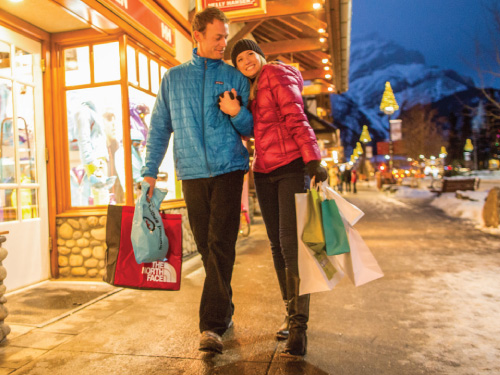 In Banff-Lake Louise, an easy two-hour drive from Calgary’s international airport, skiers and riders access the heart of a crown jewel of Canada’s park system: 1.6-million-acre Banff National Park. A trio of resorts known as the Big Three—Sunshine Village, Mount Norquay and Lake Louise Ski Resort—are where the action is, while the town of Banff, a quintessential Canadian Rockies mountain community, anchors the experience.

Split a visit here into two parts. Start at Sunshine Village, the closest to the town of Banff. Sunshine’s trails go right off the Continental Divide, cradled between Goat’s Eye and Lookout mountains. Then spend the night at Sunshine Mountain Lodge, the only slopeside lodging in the park. It’s accessible only by gondola, so once day-skiers leave, lodge guests own the mountain for the night.

Craving a touch of civilization? The Banff Centre in the nearby town is known for its music, arts and mountain culture programs. Head over to The Bison Restaurant & Terrace in downtown Banff where Canadian fare includes British Columbia steelhead trout, Quebec duck, Alberta beef and of course, bison from the Canadian prairie.

For part two, head 45 minutes up the road to Fairmont Chateau Lake Louise. This luxury hotel— perched on the edge of its namesake lake, with a stunning backdrop of jagged peaks and the famous Victoria Glacier to frame the view—is as close to a real Disney castle as North America gets. From here, hit up the Lake Louise Ski Resort and the aptly-named Men’s Downhill trail. It hosts the opening races of the FIS Ski World Cup series each year and is a member of the Club 5, making it one of the world’s classic downhill courses. Then complement the luxe experience with dinner at The Post Hotel Restaurant. It’s one of North America’s top restaurants and one of only four in Canada to earn Wine Spectator’s Grand Award. 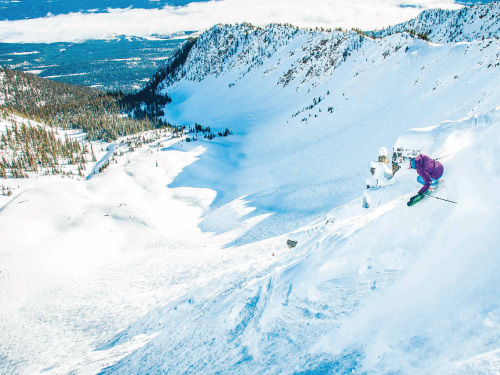 When Kicking Horse opened in 2000, it was the first new four-season resort in the Canadian Rockies in a quarter century. Located just outside the town of Golden, and in the heart of one the highest concentrations of epic ski resorts anywhere, Kicking Horse had to bring something special to the table. It did that with expert terrain in spades. A full 60 percent of Kicking Horse is dedicated to advanced runs, a higher percentage than any other mountain on this list. That terrain includes the famous (or infamous, depending on the perspective) CPR Ridge and Redemption Ridge, with double-black-diamond steeps and chutes.

Kicking Horse offers myriad lodges, townhomes and other slopeside accommodations, but there is only one boutique experience: The Copper Horse Lodge and its 10 luxurious suites. Or, nearby in Golden, Kicking Horse River Lodge has earned rave reviews from guests for nearly 10 years. The onsite Bugaboo Café is a great spot to grab breakfast to fuel a day on the slopes.

Come dinnertime, don’t miss the Eagle’s Eye. At 7,705 feet above sea level atop the resort’s lofty ridge, it’s Canada’s highest-elevation restaurant and requires a gondola ride. Eating there is worth it just for the views alone, which include five national parks from that single perch. To truly appreciate the view, skip the dinner reservation and go up for lunch, when the sun is still shining.

Off the mountain, the region’s best fare is found at Cedar House (try the house-made charcuterie), a 20-minute drive from Kicking Horse. Right in downtown Golden, beloved Eleven 22 offers an eclectic menu that lists Stilton fondue alongside pot stickers. And while in town pay a visit to the nearby Northern Lights Wildlife Wolf Centre to get up close and personal with a pack of greys—either from behind a fence that separates guests from the wolf enclosure or on a guided hike in the enclosure. 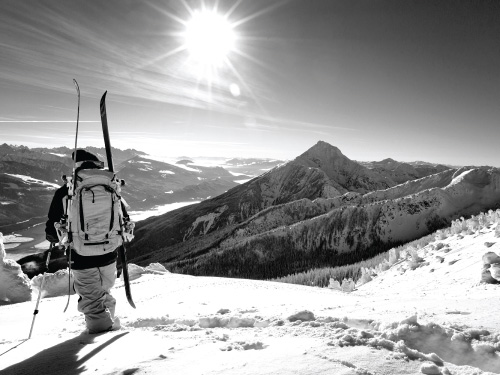 In Revelstoke, that one word says it all. It’s the name of a striking mountain, a Canadian national park, the town and the ski resort. Put the emphasis on the “stoke,” which describes the feeling of driving over legendary Rogers Pass, the high mountain road through Glacier National Park that leads to Revelstoke.

This resort is big. Seriously big. It boasts the greatest vertical drop of any resort in all of North America: 5,620 feet. That’s more than a vertical mile. And the resort’s longest run is 9½-miles long. That’s like a single ski run starting in Harlem and finishing near Battery Park. Revelstoke also claims to be the only resort in the world that offers lift-served, cat skiing, heli skiing and backcountry skiing all from the convenience of the same base village.

For food and lodging, the best bet is a mountain-town split. Bed down for the night with the ski-in/ski-out convenience of the luxury Sutton Place Hotel, but make sure a stay includes at least one dinner at the farm-to-table Woolsey Creek Bistro. To keep things more casual, plan a tour and tasting at downtown’s Mt. Begbie Brewery. Their Darkside of the Stoke stout is brewed with their own Stoke Roasted Coffee.

When legs turn to Jell-O from Revelstoke’s insane vertical, head to the Rogers Pass Discovery Centre, hailed as Canada’s best national park museum. It’s modeled after a historic railway snowshed (Canada’s first trans-continental railroad went through here). According to Parks Canada, the Rogers Pass area has the highest avalanche activity of any highway in North America. That alone would be worth the drive from Revelstoke—you can watch massive avalanches thunder down the mountain slopes after Canadian Department of National Defence soldiers fire explosives from 105-mm howitzers. 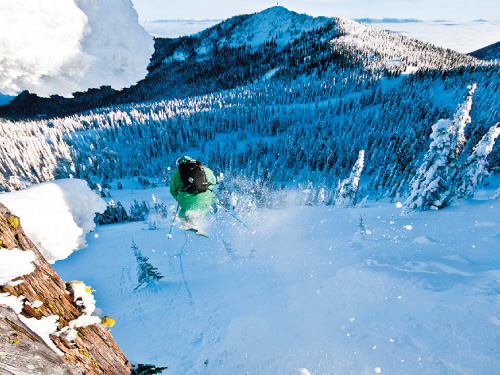 Located in Rossland, British Columbia, Red Mountain Resort offers the authentic experience only an original can provide—this is where skiing in the Canadian Rockies began and later came of age. The town is home to Canada’s oldest winter carnival, dating back more than a century to 1897. (This year it takes place Jan 29 – Feb 1.) Red Mountain is also the birthplace of modern skiing in Canada. The first chairlift in western Canada was installed here and Red also hosted North America’s first alpine World Cup skiing race.

On-mountain lodging is the way to go in Rossland, either the ski-in condos of Granite Mountain Chalets or slopeside Slalom Creek, Red’s newest venue. Rafters on the mountain and Rock Cut Pub between Red and Rossland, which doesn’t have a single traffic light, are the places to go for après drinks. For a proper meal, Idgie’s Fine Food looks modest but delivers the goods from a small but excellent menu. (Go on Tuesdays for specials on the house pasta.)

Imagine a historic downtown of low-slung restaurants and shops, the main street covered with snow (upwards of 37 feet of it fall each winter at the nearby ski resort!) and soaring mountains that seem to rise up right from the edge of town. Welcome to Fernie, a winter wonderland in the southern Canadian Rockies.

The town got its start more than a century ago from coal mining. These days, it’s the surrounding mountains—and the alpine ski resort—that are the economic lifeblood of the community. Fernie has diverse terrain that offers something for everyone. That sounds cliché, but here it’s true. The terrain is split evenly between beginner (30 percent), intermediate (40 percent) and advanced and expert (30 percent). The resort is especially known for five alpine bowls that sit below the imposing mountain trio of Elephant Head, Polar Peak and Grizzly Peak.

To stay close to the action, the townhomes at Cedar Ridge Estates offer luxury ski-in convenience close to the Elk Quad chairlift. For a unique historic-yet-contemporary alternative in downtown Fernie, 901 Fernie offers high-end accommodations in the town’s restored and rebuilt original public school dating to 1908. Plus, it’s located right on the edge of downtown shopping and dining and the on-site Spa 901 offers a great way to pamper and soothe tired, sore muscles.

For après ski, the Griz Bar on the mountain is it. A lot of bars can claim to be their mountain’s go-to spot for post slope swill, but the Griz has been doing it for more than half a century. Craving a slice of home while cruising the powder highway? Stop in for breakfast at Big Bang Bagels. No, it’s not a Long Island bagel, but locals and visitors alike rave about this version.