This Mustang-on-steroids is anchored by an imposing hexagonal carbon fiber grill split by a polished aluminum bar and wild horse running across the horizon reminiscent of the ’60’s Mustangs. The Rocket’s lines emanate from the front, through the long hood, over a set of sculptured flared fenders and converge on its integrated rear spoiler, belying the car’s extreme power and refined athleticism. Pricing will be a little more than $100,000. 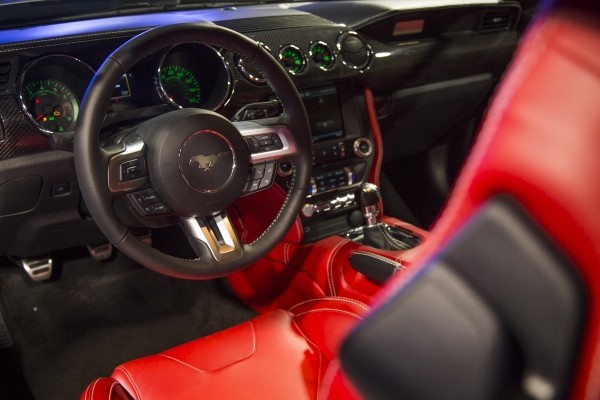 Beau Boeckmann’s kvelling like a proud papa, and with good reason. “Mustang has been my favorite car for almost my entire life,” he says. “…it’s literally the most beautiful Mustang I have ever seen.” The handmade carbon-fiber bodywork—constructed by renowned concept car builder, GFMI Metalcrafters Inc., of Fountain Valley, California, features a number of scoops and vents that direct airflow where it’s needed most. A front splitter helps draw out hot air from underneath the car and improve engine cooling, while simultaneously working in conjunction with the rear spoiler, enlarged rear diffuser and polished carbon fiber aero skirts to provide needed high-speed downforce. The car’s painted with a custom mixed silver called Éminence Grise and rides on large 21-inch ADV.1 wheels with Pirelli P-Zero extreme performance tires supported by a front and rear independent, fully-adjustable suspension. That means owners can set their car up to their own preference, or specially “tune” the Rocket for optimal street or track duty. Production of the Rocket begins in December with the first deliveries beginning in early 2015. Interested buyers will have the option of purchasing a car through Galpin Ford directly or through one of several hand-picked dealers across the country and around the world.