The Heckscher Museum of Art continues to bring interesting, multifaceted nuggets to Long Island. This winter Heckscher explores the magic of the lens with Modern Alchemy: Experiments in Photography. This diverse exhibition focuses on 20th and 21st century photographer-artists whose interpretations are a crash course in the flexible nature of spectatorship, perspective and reality.

The exhibition “exposes” the vibrant movement of 20th century visual experimentation within various species of the genus photographica. Feature pieces were conceived in a variety of divergent processes including photograms (where materials are placed on light sensitive paper and then exposed to light) and layered exposures. The artists’ manipulation during every step of the process (from conception to execution to development) peels away the shades between the starkest blacks, whites and grays. Many of the works also play with unique points of view, offbeat rhythmic choices of space and depth and manipulation of processing and exposure time. 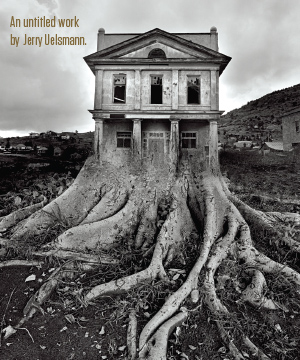 Yet, for all of this progressive originality, many of the works in Modern Alchemy circle back to the classics. A light skim over the surface of some of the pieces pulls up visual landmarks from the masters in art and music. Here the alchemy operates on another level. The pieces certainly stand on their own merit and need no larger context to be compelling, but some of the works evoke other dreams of sight and sound that make up the “greatest hits” of our culture.
Damion Berger’s “Fiac I, Jardin des Tuileries” is just this kind of visual reinvention. Using inverted exposure and stark primary contrast, he recreates the Parisian landmark as a monolithic jungle gym of sparks and arcs where fountains turn to fireworks and trees explode in a cold, neon negative space. The power here is Berger’s reinvention of a known entity. He’s taken a recognizable place and not only made it his own, but also made it new for anyone who sees his version. It’s not unlike a cover of a great song: The chords and the words stay the same, but it has a perspective all its own.
Martina Lopez’s “Heirs Come to Pass, 3” screams Salvador Dali. In a bizarre blend of bleach printing and digital montage, Lopez creates a world with strange depth of field. The deserted, moon rock desert-scape and the disjointed, anachronistic images of humanity divining at the bank of life’s twisted river invoke the feverish self-reflective dreams of “Metamorphosis of Narcissus” and the melting time of “The Persistence of Memory.” Like Dali, Lopez works powerfully on two levels: There’s the visceral sense of hallucination, and also the philosophical residue it leaves behind—gunpowder of the mind. 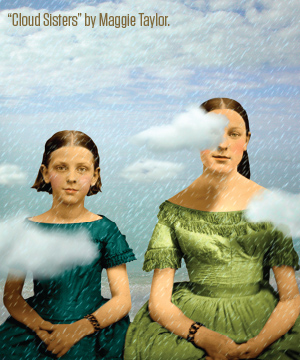 Maggie Taylor’s “Cloud Sisters” is a quaint, homey little ditty that gives way to bigger thoughts. Taylor manipulates a digital photo of two girls sitting plaintively to conjure the deceptively complex bemusement of René Magritte. The lightness of Taylor’s sky blues and her slightly irreverent composition gives off a touch of Yellow Submarine goofi ness while playing with spatial relations. Like Magritte, Taylor gently bends the viewer’s thought process, an exercise in the deconstruction and subsequent reconstruction of our relationship to the natural world.
Ray K. Metzker is more clandestine, but no less distinct in his evocation of a predecessor. Nothing about his gelatin print composite “Flutterbye” is obviously pop, but the work has an early Andy Warhol aesthetic. There’s a cloaked, narcotic repetition in its jagged, film strip vibe that speaks to the early cinematic experiments of Andy’s Factory: The sleepy dope nod of Chelsea Girls and the maddening drone of the Velvet Underground’s “Venus in Furs.” The piece seems a snapshot of the grimy East Village/Eurotrash zeitgeist, a proto-poster for Zoo Station, Berlin’s junkie haven.
In its curation, the exhibit does well to emulate the bold sense of experimentation (and homage) found in many of the works that it features. The collection is diverse in scope, with an international flavor that gives these extreme pieces a broad sense of accessibility—it’s truly a “collective” granting the spectator a sense of participation. With so much technology at our fingertips, so much natural beauty around us and so much to reference in our artistic history, these experiments invite us to look around, take it all in and try to turn it all into something beautifully new.