What happens when the game ends? The response from three former athletes to that question is clear: It’s time to give back. Marty Lyons, the former Jets star raises nearly one million dollars annually to help terminally ill children through his foundation. Legendary wrestler Mick Foley finds meaning by volunteering with the Rape, Abuse and Incest National Network (RAINN). After a 14-year baseball career Frank Catalanotto focuses on his foundation to help treat vascular birthmarks. These athletes have stepped out of the arena, but their work continues to inspire.

At the height of his football career, tragedy struck Marty Lyons. As part of a fearsome foursome dubbed The New York Sack Exchange, the defensive lineman for the New York Jets had just helped the team to the playoffs for the first time since 1969. Lyons and his wife had just given birth to their first child and then, in quick succession, the star found himself devastated by a twin loss. His father suddenly died from a heart attack and a week later, Keith, a young boy he mentored, lost his battle with leukemia.

“I could either run away or try to do something in memory of my father and in memory of Keith,” Lyons recalled. It was a conversation he had in 1979 with his Alabama Crimson Tide coach that steeled his decision. Paul “Bear” Bryant warned him, “You’ll play the game you love and have financial security, but a winner in the game of life is someone who gives of themselves so others can grow.”

The Marty Lyons Foundation was launched, dedicated to raising money to fulfill the wishes of terminally ill children between the ages of 3 and 17. Now, 32 years later, the charity is a network of 13 chapters across the country. Still, many of the wishes are the same as they always were: Owning a computer, meeting a celebrity and going on a shopping spree. And the most requested remains a trip to Disneyland. 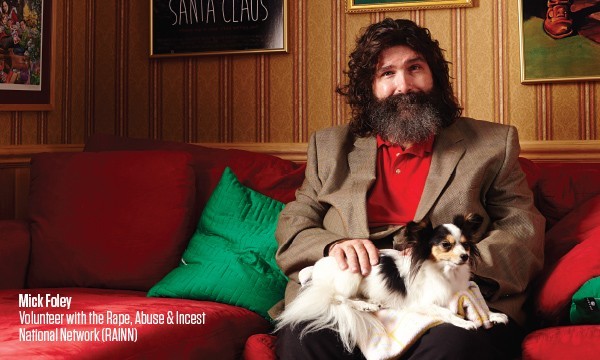 When the hardcore wrestler behind the shocking personas Mankind and Cactus Jack—and the more amiable Dude Love—called it quits from World Wrestling Entertainment (WWE) in 2000, he faced a crisis. “If I retired and I didn’t do anything, I would regret it for the rest of my life,” Foley recalled.

During his time in the WWE, Foley worked with organizations like the Marty Lyons Foundation, the Starlight Children’s Foundation and Muscular Dystrophy Association to entertain children with terminal illnesses. After retiring, he offered his services to anyone who could use him and also started visiting veterans in Washington, DC hospitals so often the Washington Times dubbed him a “legend among hurt troops.”

In 2008, singer Tori Amos introduced Foley to the Rape, Abuse & Incest National Network (RAINN). “I knew about the issue of sexual violence but I thought it was an issue for survivors and women and… after I did some research, [I realized that] an unlikely advocate like me might be able to make a bigger difference.” Foley became a donor and also logged 700 hours over two years as an anonymous volunteer, manning the RAINN crisis hotline and online chat forum.

“My wife would go to bed at ten and wake up at six and I’d still be on the computer trying to talk one person out of ending their life… the two years I spent as a volunteer are as important as anything I’ve done.”

This month, Foley, a lover of all things Christmas, will put his passion on public display for the Holiday Magic charity when he dresses up as Santa Claus to deliver presents to children in Long Island shelters (it’s his 13th year with the group).

When asked how the once menacing Mankind gets people to warm up, he shared some advice he received from another celebrity and philanthropic Long Islander, rocker Dee Snider. “[People] can check out your tough guy resume and it makes it easier to do a one-eighty and be as kind and gentle as you possibly can be.” 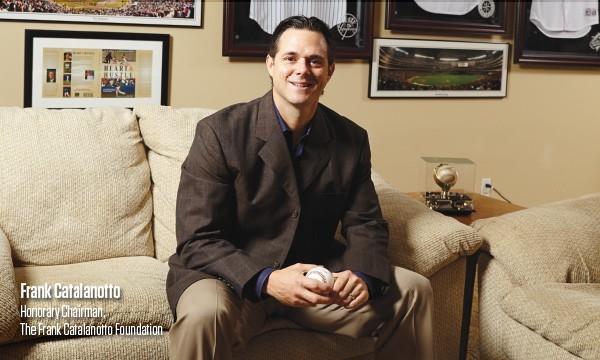 Frank Catalanotto’s first daughter Morgan was born with a strange mark on the tip of her nose. The baseball player and his wife Barbara sought out their local pediatrician who said it would go away but, Catalanotto recalled, “it only got bigger and more red. We felt kind of helpless. We felt that there should be something we could do to help our child.”

When Catalanotto was traded from the Detroit Tigers to the Texas Rangers, they met Linda Rozell-Shannon, the founder of the Vascular Birthmark Foundation (VBF) who referred them to a doctor who treated Morgan’s birthmark—a disfigurement caused by clustered blood cells that affects as many as 1 in 10 children. Morgan underwent laser surgery twice and fi nally reconstructive surgery. At age 15, her birthmark is no longer visible.

The husband and wife team launched the Frank Catalanotto Foundation and their yearly golf tournament raises more than $50,000 for VBF, which helps to support medical missions and cover the cost of surgery for those who can’t afford it.

Catalanotto was a Smithtown high school standout when the Tigers drafted him. He was called up to the majors and had a 14-year career, playing a variety of infield and outfield positions for the Tigers, Rangers, Blue Jays and Brewers. And, before he retired in 2010, he spent a year with the Mets (though he grew up a Yankee fan). He currently works in real estate but also gives baseball lessons at Baseball Heaven in Yaphank. Barbara, his high school sweetheart, runs the day-to-day activities of the foundation.

The MLB veteran recently completed Heart & Hustle, his memoir about playing in the big leagues. “Growing up I was never one of the best players on my team,” Catalanotto said, “But I always dreamed about being a major league baseball player. The book is about letting kids know that they don’t have to be the best as long as they work hard and they’re passionate about what they want to do to fulfi ll their dreams.”