After covering Borneo’s annual Rainforest World Music Festival, I visited Thailand as it weathered one of its seemingly annual government ‘coups.’ However, despite the global media portraying another Armageddon, it was business as usual in the Land of Smiles. Even better, it was June, thus blissfully offseason. The last time I visited the southern beach town of Krabi—1987 in backpacker mode—it was mostly Euro-backpackers, when $5/day covered food, thatched-roof camping, and whatever party mode you fancied. Seems everything changes (except the Knicks sucking). 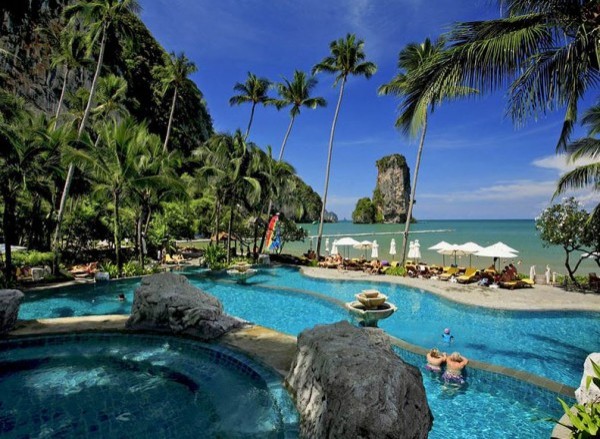 Krabi’s Centara Grand Beach Resort & Villas sits in a private oceanfront cove surrounded by sheer mountain cliffs and abundant wildlife, including throngs of fascinating but thieving monkeys. This spectacular honeymoon-caliber resort renders time irrelevant, whether it be enjoying ultra-quiet napping any time of day or kayaking amid the lofty offshore limestone pinnacles. 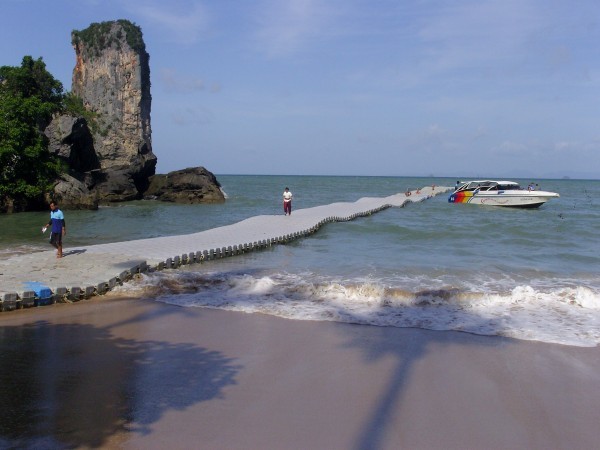 Krabi’s seaside village tourism strip—foot massage shops, football-focused sports bars, retail shopping bonanza—seems a world away, but it’s actually only a 10-minute hike over the unlit hillside-ascending “monkey trail.” Guests not keen on navigating rope-tied ladders can get to town via the frequent speedboat service to ‘downtown’ Nopparathara pier, although, due to occasional big waves, some boat departures and arrivals resemble tsunami evacuation drills. If I was 10, I would have spent most of my resort time riding their amusement-park-ride-qualifying floating dock. I did manage one happy hour on this sea-surge undulating (unintentionally recreational) rollercoaster.

In central Krabi, the 1980’s groovy vibe has pretty much evaporated, except for a few old-style haunts like the Hippie Bar & Restaurant, where cozy bench/couches for four invite you and your new pals to kick back (facing each other, feet elevated) and enjoy a blast from the past. 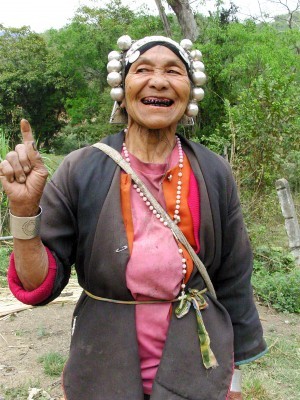 When traveling, try shopping outside the shop and bring home something that is a part of the place you visit…
A 1992 courier flight set the stage for my first visit to Thailand since my time as a backpacker in the mid-80s. A solo motorbike safari in Thailand’s northern mountains was an existential escape from another job attempt requiring dry-cleaned shirts. Just like Homeland Security wiped out the courier flight, Thailand’s wholesomeness was being challenged by the weight of mass tourism. But you can always find a pure heart if you know where to look.
On excursions abroad, I try to acquire one unforgettable keepsake and gift. Often, things that are not officially for sale become those gems, and the tale of the transaction becomes a souvenir itself. I’m routinely on the lookout where there are no price tags. Worksites—factories, mills, home-based workshops, ports, mines—are replete with handmade tools, hunting paraphernalia, garments, and such that might complement your desk, wall, or reputation as a gift giver.

In Thailand’s misty mountains, I encountered a group from a local hilltribe returning from a day of river fishing. Along with baskets of fish, they each had fish traps slung around their shoulders. The traps fused lobster-trap utility with bamboo ingenuity. Created from one section of bamboo sliced into segments and enlarged into a vase shape, the trap’s inner bamboo-stick corkscrew entraps the fish who are lured inside by bait. I bought one for double the offering price.

I knew the fish trap—tied to the outside of my backpack while transiting Bangkok on foot—was a winner when scores of elderly men accosted me to admire the functional artwork recalling their youth and a fading way of life. Another sign was the perplexed stares it earned on the New York City subway ride home from the airport.

You’d think that savvy shopping in an out-of-the-way village defined by coconuts, hogs, and woven baskets would be a misnomer, but by focusing less on how things look and more on how they work, you can end up with a real crowd pleaser. People look at the fish trap, are puzzled by the bamboo marvel, then cave into admiration.

When buying things that aren’t officially for sale, be sensitive to cultural rape. Make sure the economically stressed are parting with possessions they can easily replace with your payment. Don’t be swayed by politeness regarding an item they will really miss. Acquiring not-for-sale genuine parts of the places you visit necessitates sensitivity, fair compromise, and bargaining with the right individual.

“Like playing flute to a buffalo.” —Thai expression about bargaining falling on deaf ears 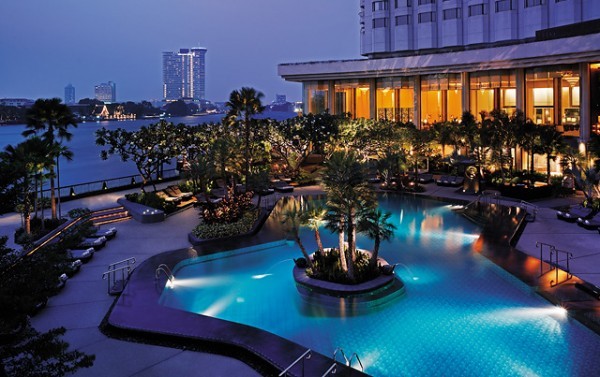 One of Bangkok’s swankest urban riverside retreats is the Shangri-La Hotel. The immense, luxurious lobby leads the way to its lush riverside ‘front yard’ where a huge outdoor pool fuses with outdoor dining and drinking lounges and the NEXT2 Café—site of an epic breakfast buffet. Thai-inspired décor, silk and teak finishings, high-ceiling chandeliers, and spacious river-view balconies lend an air of elegance to guest rooms.

Centrally located alongside Bangkok’s bustling Chao Phraya River, you’re minutes away from epic street life via three modes of transport: long-tail boat taxis, cabs, and Bangkok’s far-reaching Metro. This Shangri-La has 802 rooms, nine restaurants and bars, and a staff that redefines kindly. All of this mellow glory converges at Shangri-La’s Horizon Club Lounge, which has penthouse views of the city. 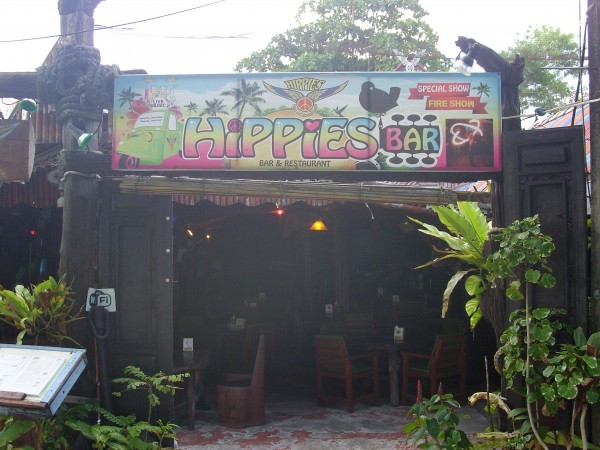