“Today you are You, that is truer than true.
There is no one alive who is Youer than You.” – Dr. Seuss.

Keep your energy up as the holiday season kicks into overdrive by visiting SUS Gallery on Middle Neck Road in Great Neck Plaza. “Judge Me: We Are All Expressionism,” is an energetic, almost dizzying mixed media exhibit by New York based artist and photographer Andrew Tess.

“It’s sort of a play off of the expressionism movement,” Tess said. The exhibition explores birth, death, voyeurism, sex and psychology in a series of works that started off as performance pieces.

“People always want to touch it,” SUS Gallery owner Alexandra Ainatchi said. “Is it paint, is it not?”

Emotions that constantly change depending on the onlookers mood, time of visitation. Tess himself said he feels different things each time he looks at a piece.

“I just went for it with each piece,” Tess said. “Whatever was in my head, didn’t know where it would go, but I had a general sense of a theme.” 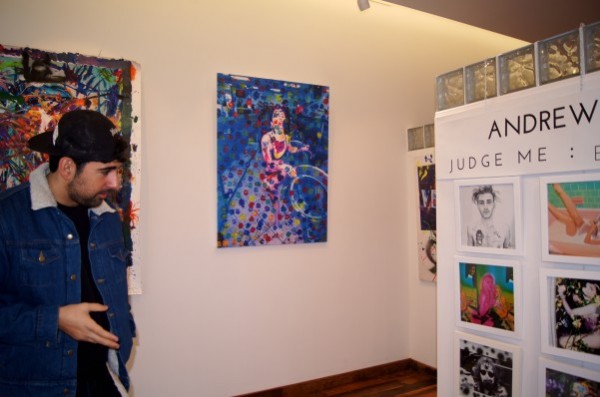 Each piece started as performance art, which Tess then painted over and what he said was a very time-consuming process between setting up the performance art, developing the photographs, working to saturate the photographs and then once the print was done painted over it. By painting over the prints Tess almost hides the reality of the pieces, protecting the people in it from judgment from the onlooker while creating different emotions.

“The performance aspect really comes out of it,” Ainatchi said. “It creates this dizzying effect and sense of disorientation.”

At the center of the exhibit is a series of prints sized as Instagram boxes many of the subjects are part of New York City’s club scene and Tess describes them as some of the most talented people he knows. But the Instagram series is a play back to Tess’s start as an artist on Instagram.

“Instagram can really build or break a career,” Tess said. “I wouldn’t have been able to share my work without it, it’s a re-interpretation of subway art in a way.” 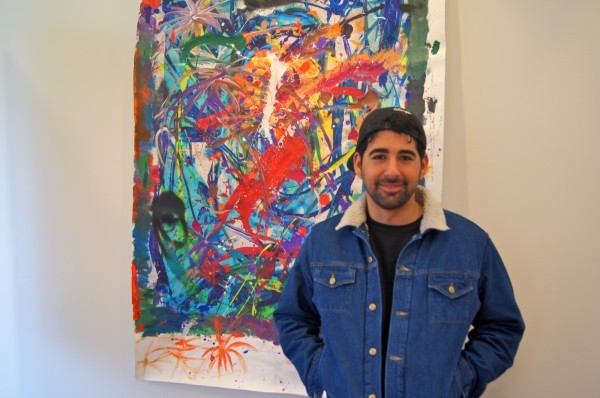 “Judge Me: We Are All Expressionism,” is one of the emerging artist’s first solo shows. His first, “World Peace” was at Leftfield in the spring of 2014. He graduated from The New School with a degree in Culture & Media and takes influence from films such as Georges Méliès’ A Trip to the Moon (1902) and Wes Craven’s Scream (1996) and New York City street culture.

The last piece in the exhibit “Sophia Profusion / Dr. Seuss” is the move towards the work Tess said he is now working on. It’s a fun, optimistic piece full of color and light. He left the piece unstretched and it’s closer to the onlooker somehow less trying to protect the view of the art as if Tess is more willing to say, “this is who I am.”

“At the end of the day we all have some secrets,” Tess said.

“Jude Me: We Are All Expressionism,” is at SUS Gallery through Dec. 4, 2014. For more information: http://www.susgallery.com/.