For eight years the Long Island-based indie rock band, Robbers, has delighted listeners with their haunting, driving music. After a break from playing locally while lead singer Andrew Accardi was in Montana the three-person band is back on the Island. Accardi, John Favicchia and Mike Gagliardi performed at The Revolution back on October and they’re back on Thursday, Dec. 4, headlining with Derrick Smith of Rice cultivation Society, SleepBellumSonno and The Republic of Wolves. They’re also working on fifth album.

Pulse Insider: How would you describe your music to someone you just met?
Andrew Accardi I wouldn’t be able to describe it, and not because it’s indescribable. I’m just constantly changing and growing into whatever style speaks to me at the particular moment. Robbers’s previous albums were very driving and aggressive, but that doesn’t mean that’s who Robbers is. My new material is much more relaxed. I’ve learned a lot about how to write a song in the two years since “Delicious Dark Myths,” and I’m still learning.

Pulse: How did you get your start in music? Was there a point at which you knew you wanted to be a professional musician?
AAI started playing piano when I was about 13, just messing around creating stuff. That was initially what appealed to me right away about playing an instrument. I could create something of my very own, something that truly belonged to me. I suppose taking things professionally didn’t mean much to me until the end of high school. Before that I just a kid making strange art. 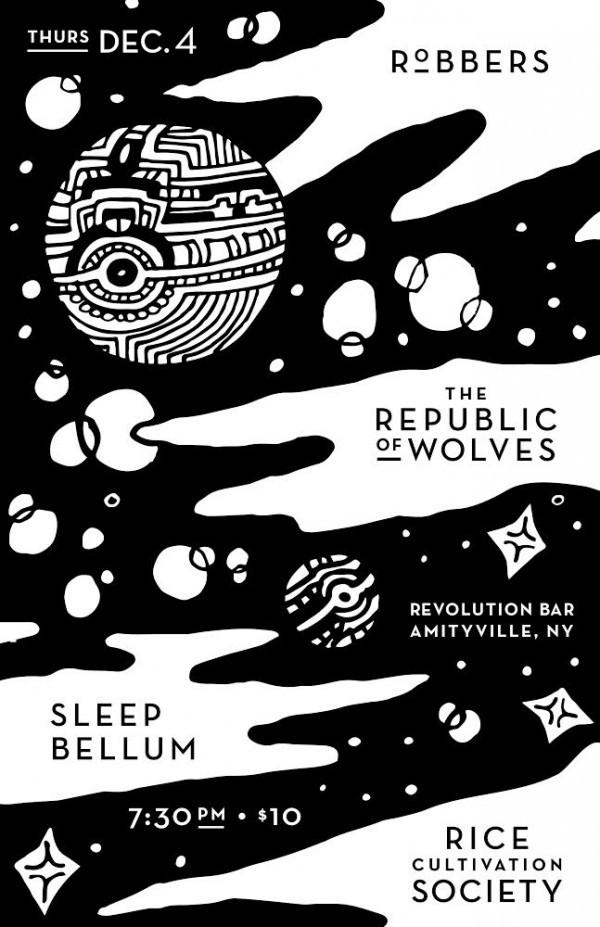 What’s next for Robbers? Where are you playing in the next few months? Any big projects planned for the next year?
AA Now that I’m back from Montana, We are playing as much as we can, including The Revolution in Amityville on Dec. 4, headlining with Derrick Smith (Rice Cultivation Society), SleepBellumSonno, and The Republic of Wolves. I am planning on beginning to record Robbers’s 5th album this month. I am really excited for that. It’s going to be Robbers best.

Pulse: What do you enjoy about performing live?
AA I love connecting with people. It’s the rawest way to connect with someone in an artistic way, and I’m so grateful for that gift. I love connecting with my dudes on stage, when they’re in the middle of soloing and everybody else is right behind them supporting it. Our live show really is something special now.

What non-musical activity most inspires and energizes you?
AA I am a huge comic book collector, and I do a little bit of light astrophysics research on my free time. You know, theories on how the universe was made, and how it could be unmade, and why we think it was even made in the first place. Very interesting.

See Accardi, Favicchia Gagliardi at The Revolution in Amityville on Dec. 4., at 7:30pm. Tickets are $10. http://clubloaded.com/revolution-bar-music-hall