Any convertible is a good convertible when it’s 75 degrees out and the sky matches the blue of your windshield wiper fluid. It’s more of a challenge to love a convertible when winter winds are blowing the tissues out of your hands before you even get to wipe the cold-induced rivers running from your nose. My 2015 Lexus IS350, driven during a cruel winter blast, was nonetheless a glorious, fun week’s test-drive. It’s gorgeous, first, its sweet red color accenting its body’s many angles, sharp corners and mean-looking flanks. If I was a cop, I might be tempted to pull this thing over even at a dead stop because it looks like it’s doing 1,000 miles an hour when it’s just sitting there. The biggest and best news, however, is how much punch this car packs for its base price of $44,155. For that sticker, you get 306 spirited horses in a V-6, AND it still manages to pump out 28 MPG combined in highway/city driving. Its adaptive-suspension-enhanced handling lets the car straighten out your all-over-place driving style, and while I found the steering wheel-brake combo a tad numb when compared to the car’s power, I had to remember that this isn’t a race car – it’s a Lexus, and Lexus’ audience at this level tend not to be rock stars or firemen on the way to a burning house. 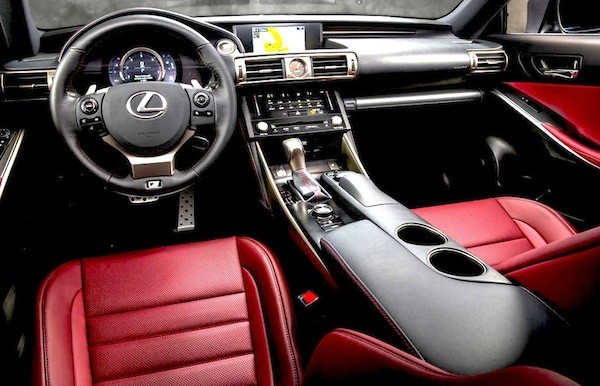 Inside, the flavor is appropriately upscale, adorned with leather, high-end instrument knobs and a twinkly, attractive face during evening drives. Its Remote Touch Controller, overseeing the nav, sound and climate systems, is a niggly-wiggly, annoying little Knob I was tempted to break off and throw out the window, but that was compensated for by the optional $3,180 F-Sport Package, delivering sport seats, LED front headlamps, 18-inch F-Sport wheels surrounded by all-season 224/40R18 tires, and more goodies. Crank it up via its pushbutton starter and it fires like a rudely awakened bear, with power delivered either to the front wheels or all four if you wish. There’s more, so much more, but the IS 350 is a prime example of what’s possible in an under-$50,000 ride, and it brought much repeated and pleasurable heat to my chilly carcass during its week’s test.