Kathy Keevins recalls that when her niece, Katie, was in high school, she read on her Kindle constantly. But now as a college sophomore, she has ditched her e-reader for paperback or hardcover books.

“She said, ‘I just really like having them in my hand,’” Keevins, a retiree from Hicksville said. “But you would think an older person would be like that.”

It’s true that those who grew up in our increasingly digitized world are more likely to use an e-reader or tablet to read a book, while retirees like Keevins remain mostly paper-and-ink readers. A Pew Research Center report found that while age groups don’t play a significant difference in overall reading rates, people ages 18 to 29 were significantly more likely to have read at least one e-book in the past year.

Keevins, though, is among those from the latter demographics that regularly download digital books to e-readers or tablets. At any given time, Keevins is reading three to five books, everything from mysteries to young adult fiction. So it was mainly for convenience that she switched to a Nook soon after Barnes & Noble released the e-reader in 2009. 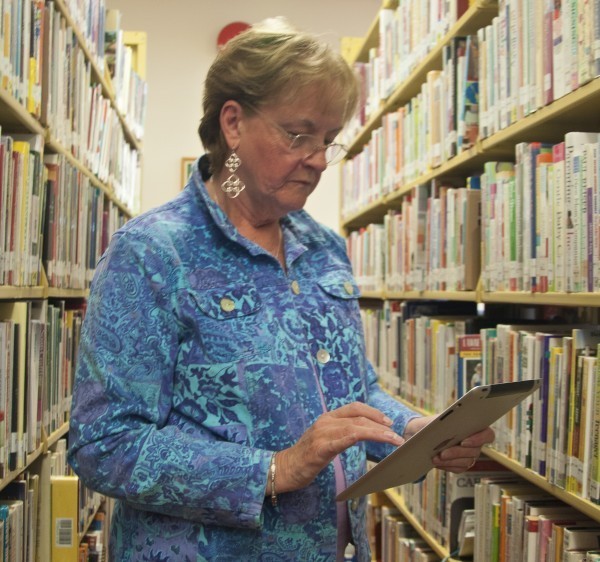 Kathy Keevins switched to using a Nook when Barnes & Noble released the e-reader in 2009, but now she reads most of her e-books on an iPad. Photo by Joseph Kellard

“For me, an e-reader was great because I used to travel a lot and had to pack a lot of books,” said Keevins, who now reads on an iPad. “That’s why I went to it initially.”

Ferah Shaikh, a seventh grader at Locust Valley Middle School, prefers to crack open books rather than read on her iPad, placing her among the 69 percent of Americans who said they had read at least one printed book in the past year.

Ferah used to prefer swimming to reading books. But last summer her mother started to check books out of the library for her. Ferah eventually read 40 books, mostly adventurous, dystopian-type series, including the Maze Runner by James Dashner and Divergent by Veronica Roth. 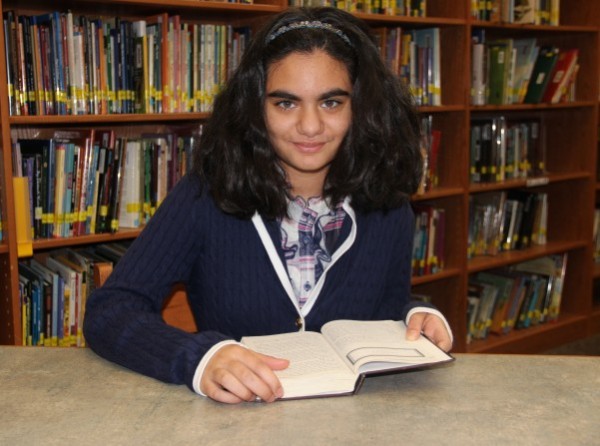 Ferah Shaikh, a seventh grader at Locust Valley Middle School, owns an iPad but prefers to read virtually all of her books in their printed versions. Photo by Locust Valley School District.
“They are really long books, like 500 pages each,” Ferah said. “I finished each of them in about a day because they’re really, really good.”

Ferah said that her schoolmates, insofar as they read, mostly download books to their iPhones. She typically checks a book out of the library each day, reads it, and returns it the next day.

“I like how the ereaders are smaller and you can take them anywhere, and I don’t think there’s anything wrong with them, but, I don’t know, I just like printed books better,” she said. “I just like to have a book in my hands.”

When Keevins was an assistant principal at Farmingdale High School, she read books her students were reading, such as The Help by Kathryn Stockett and The Art of Racing in the Rain by Garth Stein, in order to talk about the stories with them. Otherwise, she enjoys presidential biographies, especially of Jimmy Carter and Abraham Lincoln, and often downloads popular fiction such as The Shoemaker’s Wife by Adriana Trigiani and House on Riverton by Kate Morton.

Still, Keevins buys the occasional hardcover, if she expects it will be a great read. She also continues to read hard copy magazines and newspapers, mostly because she likes to tear blurbs or ads from their pages. Yet increasingly she pulls out her iPhone to snap a photo of such items.

“I couldn’t survive without my electronics,” she confessed. “I swear to God I couldn’t.”