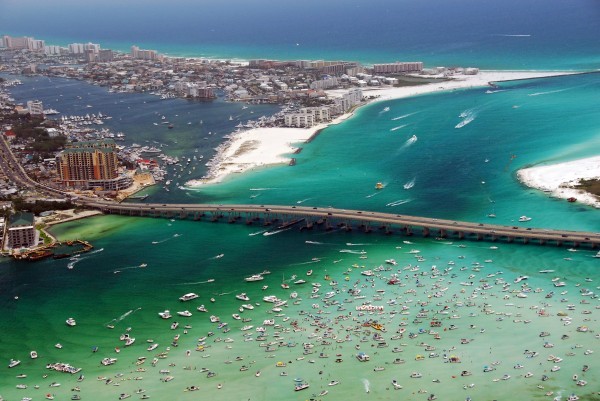 Scenic Highway 98 parallels the Emerald Coast shoreline within this 100-mile stretch of the Florida panhandle. When people say it has sugar-white sand (actually fine quartz flakes) and emerald colored waters, believe them. The upland estuaries that have been feeding these beaches for millenniums creates this sugary magic. On the opposing sides of the Emerald Coast’s beaches, the sand turns back into, well, sand. Resembling the Bahamas, tourism-friendly Destin and Fort Walton are separated by a five-mile expanse of wide-open and ‘undeveloped’ Okaloosa Island (although the military decides what happens on most of this 55-mile-long island, which acts a barrier beach). You can hear the fish calling your name. 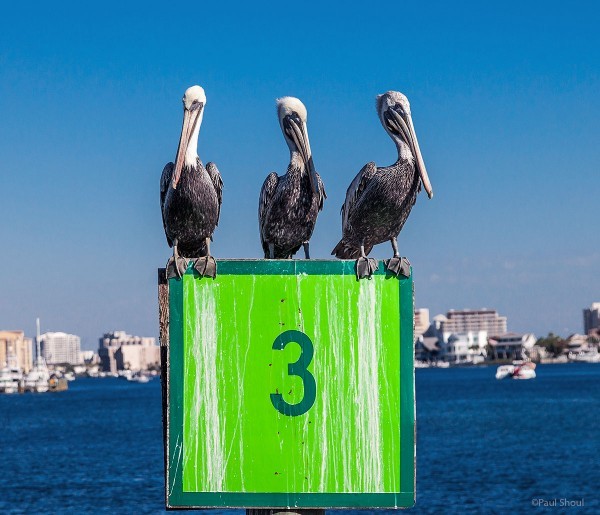 The Gulfarium on Okaloosa Island is a sprawling, rustic campus for aquatic life interaction. This grandmother of open-air aquarium marine parks is a homey environment to more than 1,000 animals living in 26 habitats. Habitats include rescued sea turtles, immense tortoise, Asian otters, and 13-foot 800-pound American alligators. You can also mingle with dolphins and swim with stingrays in their breeding habitat. Kids of all ages will dig this reintroduction to Mother Nature. 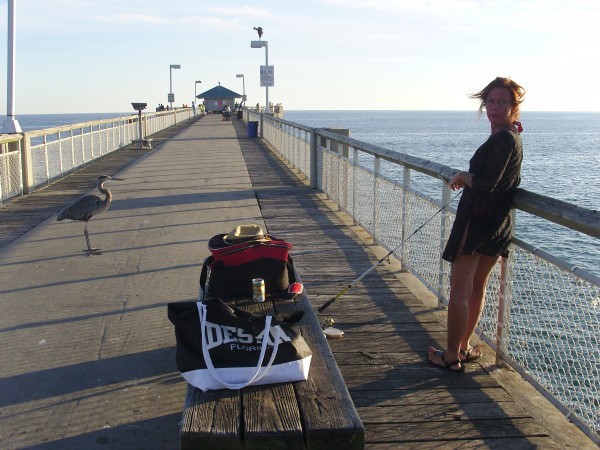 Right next to the Gulfarium is another chance to stroll down a wildlife-infused Gulf of Mexico pedestrian main-drag that I nicknamed “The Berth of Bold Herons and Pelicans.” Okaloosa’s unofficial main street—the Okaloosa Island Pier—was built between 1995 and 1998. It stretches 1/3 of a mile out into the Gulf (if you include the back wall of the classic, breezy fisherman’s bar, which overlooks the pier) and terminates with an above-water cul-de-sac where tourists and fishing folks mingle. The pier’s overlords, herons and pelicans, stand perched above the lampposts waiting for snack opportunities. Strolling along this pier while people and animal-watching was one of my favorite Emerald Coast activities. You can seek, rent, or buy whatever you need to blend in here—bait advice, fishing poles, and snacks—at a weathered shack at the base of this epic over-the-Gulf boardwalk.

Seafood is obviously a theme here, and many restaurants will cook what you catch. Destin’s waterfront Jackacudas sushi menu tells a tale—the chef, who grew up on a military base in Japan, imported the recipes here and adds his own twists, which include frying sushi, all of it freshly caught and then sliced right on their nearby dock. There’s no shortage of military bases or veterans in this region, or the occasional fighter jets, helicopters, and drones overhead. Also in the Emerald Grand Complex is Grand Vista restaurant, whose lovely veteran waiter suggested fine wines to match the seasoning of the mackerel we’d caught earlier that day. 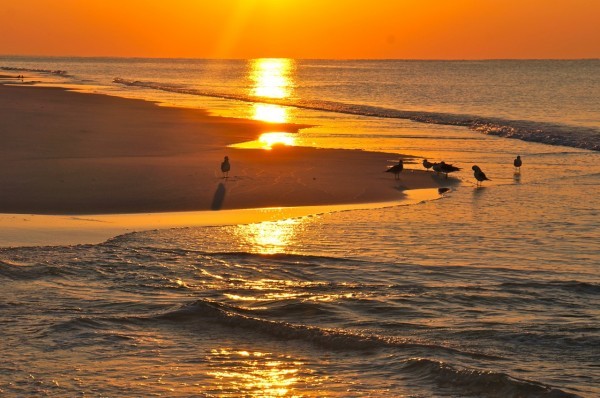 While standing upon the Emerald Coast’s baby powder sand, you also notice there aren’t even any shells or even bits of shells—heaven for the feet. Sunsets take center stage here as the sun dips into the Gulf, and the purple haze grows. I overhear two locals talking about their good schools and low crime. Nobody seems worried about anything.

Most guys (and some gals) come here to fish…really fish. A good place to make this happen is at Harbor Walk Marina, where an army of deep-sea fishing charter boats await. I lucked out by landing on Captain Billy Teem’s 52-foot boat named Fish-N-Teem, which can be chartered for four hours or three days—it’s also a live-aboard, if you’re prowling some serious tuna. Captain Billy noted that “Florida is a no-drilling state, so there are no oil rigs like you see in the Gulf off Mississippi, Louisiana, or Texas.” The rigs do attract fish, as they act like bait traps, but this captain and his first mate Wyatt don’t need any help luring a carnival of fish.

Twenty-five miles out (goodbye cell signal just as the beachside hotels dip below the horizon), we caught mostly mackerel and blackfin tuna, but we weren’t the only ones hunting. Turns out, the dolphins have figured out that Billy knows what he’s doing—what he terms finesse fishing—so several of the immense mackerel we reeled in attracted a fan club of dolphins that tried to steal our catch. On cue, dolphins would race in like a moment from Jaws. Partially successful, a few of the mackerel we caught had fresh dolphin teeth marks on them, which made you think about your place in the food chain. We also reeled in a bonita and a shark, which we let go. We passed the fishing pole around while pulling in the 200-lb shark and got a brew-earning workout. 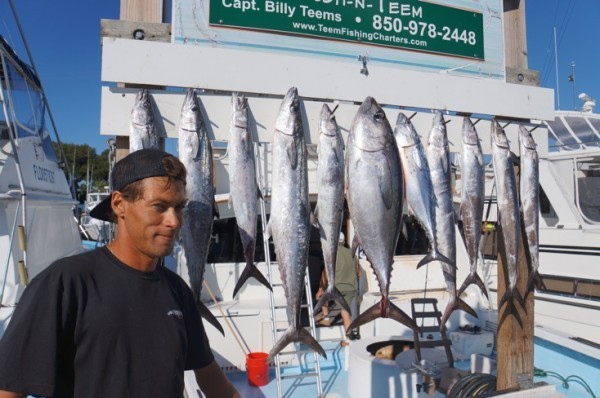 Back on the dock, Wyatt expertly cleaned our catch and sliced off a few nuggets of blackfin tuna sushi—this fishing-charter-Renaissance-man even had a stash of wasabi and soy sauce. Contact Fish-N-Teem via 850.978.2448.

My final moment in Destin was at Mama Clemenza’s restaurant, which serves classic Italian dishes. After a tasty European breakfast including imported Irish bangers, Mama herself, a knowing, retired nurse, stepped outside onto the patio to greet us…and issued two friendly warnings.

For more information visit emeraldcoastfl.com. I enjoyed my stay at Sterling Shores, where my swank two-bedroom high-rise Gulf-view pad even had a washer/dryer (and detergent), 888.450.9572. For a great taxi service (and a local history whiz) call Larry Woodward with Airport Shuttle 850.585.9949.

Ps, Uncle Buck’s Fishbowl and Grill is uniquely designed for family fun; casual dining featuring a variety of appetizers, sandwiches, salads, and burgers. An island-theme bar area recreates an underwater/sunken treasure ship experience with aquatic life appearing to swim overhead. The bar has a huge saltwater aquarium with scores of tropical fish—and it’s elevated to provide views of the bowling action while you enjoy your favorite beverage. The numerous full-sized bowling lanes offer customized bowling balls that bear the likeness of octopus, mermaids, camouflage and more. 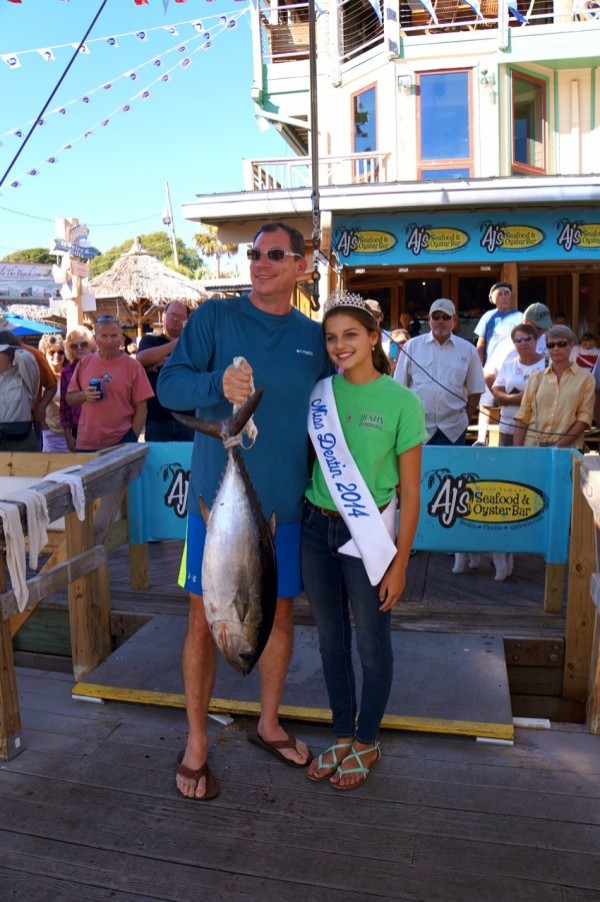 Ps, I played with a few titles to open this story, including Panhandle Hospitality, but I must close with this one: Panhandle Riviera.