Ten years ago, it was the Escalade. Tony Soprano survived an assassination attempt while climbing into his, losing a quart of orange juice to a bullet, and vanquishing two inept thugs. Sure, he crashed the ride seconds later, but folks still rushed out to buy the Escalade because of its association with basassery on TV and in real life, hip-hop stars and whatnot embracing the big guy. Now, it’s the G-class you want if your ride needs to make an impression. You roll in this thing and everyone has something to say, whether it’s “woo” or unggg.”

There’s great reason to, though. The G-class isn’t dissimilar from The Chariot in “Lost In Space.” (60’s TV show – not the lame remake.) You get the feeling you could be dropped onto Mars and make your way around just fine, thanks. The G-Class was designed as a military vehicle around 30 years ago, but it’s acquired leather seats, cockpit gizmos and a little – not a lot – of suspension adjustment to make it fit for public streets. Hint: Don’t take it over potholes or beat-up roadways as you’ll be bounced around like shot in a maraca. Take it on highways, to the beach, or off road if you wish. It can take it. It can take anything. It’s also shockingly nimble, rocketing you from 0-60 in a little over 5 seconds. That’s stupid fast, especially given that the G-Class weighs 5,622 mean pounds. Of course, that acceleration probably destroys what little gas mileage you’ll get even when taking it easy on the accelerator – a reported 12 miles to the gallon in the city, 14 on the highway. It’s really not surprising since you’ve also got a V-8, 536-horsepower engine under your hood. 20-inch black AMG 5-spoke wheels add to the vehicle’s flavor of complete badassery. 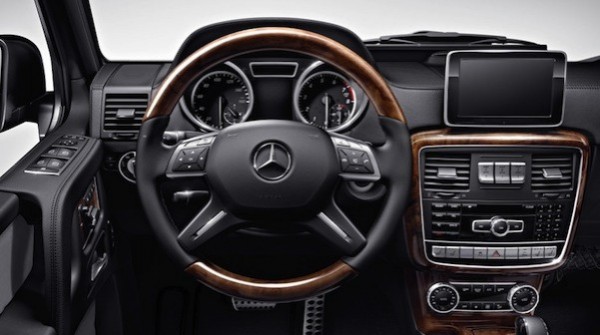 Handling isn’t so great, with a numb steering wheel and brakes meant for comfort, not speed, but that’s the point. It’s brute, not ballerina. High-quality hide covers not just the seats but the dash and door inserts, and polished wood and chrome accents top off the luxe flavor. It practically orders you to drive it off-road, too, with three available buttons sequentially locking the rear, center and front differentials as needed. A 4-wheel Electronic Traction System (4-ETS) monitors wheel slip and adjusts power delivery accordingly. The G-class is aimed squarely at those wishing the ultimate can-do SUV, for whom pricing isn’t the first priority. SUVs simply don’t get better than this.