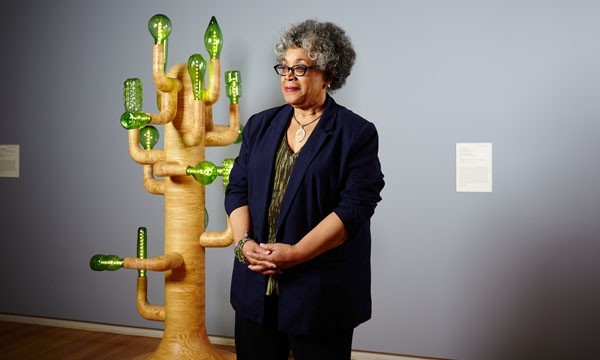 Lowery Sims visited numerous nations to identify artists for a new show at the Museum of Arts and Design. image: yvonne albinowski

The Museum of Arts and Design’s chief curator Dr. Lowery Sims spent 2 1⁄2 years traveling to Panama, Mexico, Brazil, Venezuela and Chile to find some of the most exciting art and design being made in the region. From her odyssey, Sims selected more than 75 artists, designers and collectives whose work addresses social and political realities with expressions ranging from frustration and consternation to optimism, humor and hope. The result is New Territories: Laboratories for Design, Craft and Art in Latin America, a sprawling, thought-provoking exhibition that is the first group show of contemporary Latin American design ever in the US.

The exhibition presents videos, clothing, tapestries, photography, films, architecture, furniture and even toys, easily bridging whatever line divides art and craft. Though Sims pointed out, “We don’t think there is one. Some people conceive of art as being exclusively about concept and idea and craft about execution and skill…the best art in the world combines both.”

Sims’ 27 years at the Metropolitan Museum of Art produced new visions of 20th century and contemporary art, including the rooftop garden exhibitions she oversaw for more than a decade. In 2007, after seven years as executive director at the Studio Museum in Harlem, she became MAD’s chief curator. Sims has had a powerful effect on the cultural landscape of New York, being one of the first curators to bring minority artists to center stage, and what led her there was her parents. “My mother grew up in Harlem during the Depression but formulated for herself a very rich cultural life. We grew up with the idea that you could always get standing room tickets at the opera, the symphony, or the ballet and get into the museums for practically nothing.”

The search for vibrant new works that articulate life in Latin America led Sims to six cities. “Within each city you had a primary focus” on something like recycling or urban planning, she said. “But it was also happening in other places too. So this allowed us to both honor national feelings without making it nationalistic, and at the same time show how ideas really travel around.”

The collection she’s put together in New Territories includes “La Ciudad Frondosa,” a colorful, lush, 9-by-12-foot embroidery by Argentinian artists Chiachio & Giannone. “I had first seen [their] work about a year ago at Art Basel and I was knocked out,” Sims said. The piece is about “crossing genres and crossing genders of what you associate with embroidery” since both artists are male. She also selected Mexico’s Pedro Reyes’ “Guitarra,” in which he disassembled guns and used the parts to create a musical instrument, “resurrecting something destructive and making it into something constructive.”

For more than 40 years, Sims has been bringing once marginalized areas of art to the mainstream and she looks forward to continuing to show visitors to her museum “that there are ways that they can stretch their imaginations and find creative solutions to their lives.”

SEE IT:
New Territories: Laboratories for Design, Craft and Art in Latin America brings top designers and breakout new artists from across Latin America to New York for the first time. More than 200 works by 75 creators will be on view through April 6.