When Rose Lem married the owner of a small Chinese restaurant in Hempstead and came to live with him in the early 1940s, they were among the few people of Chinese ancestry on Long Island. Those who arrived earlier mostly worked in restaurants or laundries, as had her husband, Arthur, who labored in laundries in Floral Park and Hempstead after landing in the United States in 1926, at age 12. “No one was hiring Chinese people,” said Lem, who was born in the US in 1921. “We were ostracized. We were strangers in this country, even if we were born here.”

That attitude started changing during World War II, when the US and China became allies. Immediately after the war, the Long Island Chinese population also started changing thanks to relaxed immigration laws, the building of new homes for veterans in Levittown and offers of jobs by Grumman and other companies.

This was a first wave of Chinese Americans in suburbia, a movement that has been growing ever since. It is marked by a drive to assimilate balanced by efforts to retain the traditions of their ancestors. Most Chinese on Long Island celebrate American holidays as well as Chinese New Year, which falls on Feb 19 this year.

And yet, say some Chinese Americans, there is still unease. “We are perceived as the model minority and as perpetual foreigners,” said Gary Mar, an associate professor of philosophy at Stony Brook University and third-generation American who has lived on Long Island for more than 25 years. Though he has been active in Asian American affairs, he never visited China until 1995. When asked where he comes from, he answers California. But that doesn’t satisfy some questioners, who then ask, “but where do you really come from?” 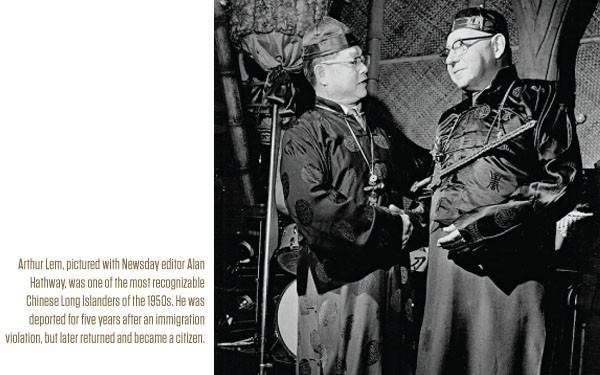 Discrimination was more blatant in the 1950s, when Bronx-born newlywed Ann E. Chan, a secretary at the time, and her husband, a draftsman and designer, moved to Long Island from Manhattan’s Chinatown. They put a down payment on a home in Wantagh, only to get a call a few days later. “At first they were very discreet and said the house was already sold. When we said we would take another house in the development, they told us the developers didn’t want Chinese people to live there.” Though it stretched their budget, they found a house in New Hyde Park that was being sold by a Chinese family. Chan eventually joined the Long Island Chinese Circle and became its president for eight years. The Circle led to the founding of the Chinese Center on Long Island, which offers language classes and folk dancing instruction along with ping-pong, Mah Jong and a senior group.

Chinese migration to America in significant numbers began in the 19th century. After 1848, thousands came to the West Coast for the gold rush. Besides mining precious metals, Chinese immigrants worked on fishing boats or farms, rolled cigars, made shoes or helped build the First Transcontinental Railroad. Some started their own businesses. They were never fully welcomed, however, and in 1862, President Lincoln signed an act that constricted immigration. Other laws followed until in 1882 the Chinese Exclusion Act prohibited all immigration by Chinese laborers and excluded all Chinese residents from citizenship. The act wasn’t repealed until 1943 and even then, Chinese immigration was difficult until adjustments in 1965. 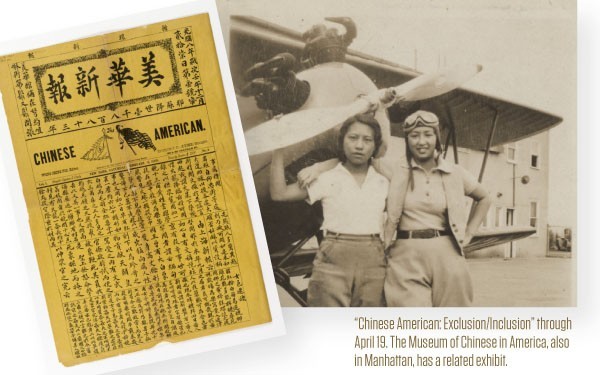 A popular strategy for circumventing exclusion laws involved false identity papers. People pretended to be the sons or, less frequently, wives or daughters of American residents. One such “paper son” was Arthur Lem, Rose’s husband. His father, who came to work on the railroad, arranged with a coworker at a laundry to bring Arthur over. Arthur joined his father at the laundry and eventually branched into restaurants. Thanks to his skills and close friendship with Newsday managing editor Alan Hathway, Lem was frequently featured in the newspaper and became probably the most famous Chinese person on Long Island in the 1950s. Fame didn’t save him however, from immigration officials, who charged him with illegally bringing in other “paper” people in 1959. Arthur was jailed and eventually deported, said Rose. “He had to leave for five years, but then he came back and became a citizen.” In their later days, Rose opened a gift shop and Arthur helped to develop the Kismet area of Fire Island.

Rose had her own adventure during the Depression when her father took the family back to China (not uncommon at the time). He returned to America, but Rose’s mother and brother died, leaving her alone in China with two siblings. After the Japanese landed in the 1930s, she decided they had to leave the mainland.

“I was the oldest child, barely 16. My sister was 13 and my brother 15. We went to Hong Kong.” The United States embassy wanted to help them, since they were American born. “We sailed for 21 days to Seattle. We had no identification, no passport.” Finally, they took a train to Washington, D.C., where their father had a laundry. Friends introduced her to Arthur and after a year of courting, they got married. 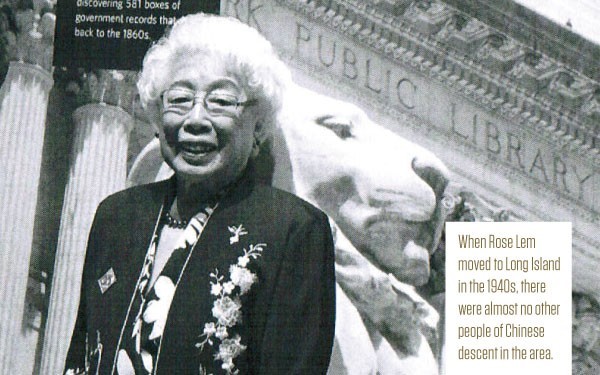 The influx of Chinese Americans increased dramatically after the 1965 change to immigration laws followed by China’s “open door” policy, which started in 1978. Dr. Yong Luo is a recent Long Islander, here five years. An allergist-immunologist in Plainview, he came for a residency after getting his MD in Beijing and a PhD in the Bronx. He volunteers as the principal of the Long Island School of Chinese in Old Westbury. Most of the students know some Chinese from home, so the school teaches reading and writing and tries to “enrich them with Chinese culture, which is the most difficult part, because we’re in a different country.”

The Chinese population increases every year, he said, with many families moving to the Great Neck, Syosset and Jericho school districts because they are among the finest. The parents work in engineering, computers, finance, biology and similar careers. The school’s newest plan is to open a class for “non-heritage kids,” who are adopted or whose non-Chinese parents think it’s a good idea for them to learn Chinese.

The New-York Historical Society Museum in Manhattan has an excellent exhibition called “Chinese American: Exclusion/Inclusion” through April 19. The Museum of Chinese in America, also in Manhattan, has a related exhibit.