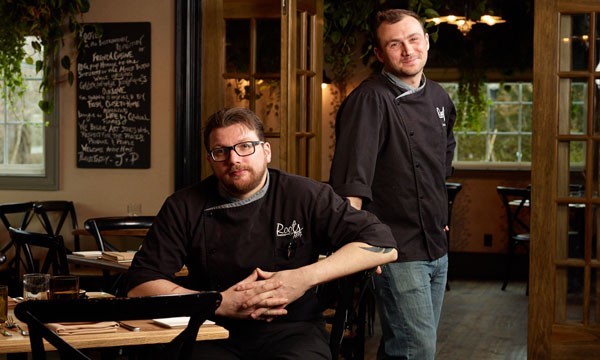 Philippe Corbet and James Orlandi are sitting at a high, stained-oak corner table inside their restaurant on a Thursday afternoon. It’s just after midday and the bar area is quiet; a few couples are eating in the nearby dining room. While the co-owners of Roots Bistro Gourmand are discussing their restaurant’s point of view, the conversation turns very specific. Corbet is describing the importance of texture in food, steadfast in the notion that a dish needs at least three tactile variations: crispiness, creaminess and crunchiness. For the uninitiated, “crispy is something that you break, crunchy can be crunchy on the surface but moist on the inside,” he said.

Those rules mean a lot here. Corbet, born and raised in Chambéry, downwind of the French Alps, cooked in Michelin-star-rated restaurants there for eight years. The country also sparked Orlandi’s decision to enroll at the Institute of Culinary Education in New York after an extensive European tour. Both are well-versed in the architecture of a French kitchen with its rules and hierarchy. But then there’s the cheese foam, the anchovy paste, a protein-based food glue and blood orange gel. This is the sort of cooking that would be unfamiliar to Corbet’s grandfather, also a chef, or his pastry chef uncle.

They describe Roots as a bistronomic, a comfortable restaurant stripped of pretense, thanks in part to the building’s history as a century-old speakeasy. The menu celebrates a lot of classic French techniques and dishes, but it’s not a heavy, buttery, creamy French restaurant. There are classic bistro elements here: bare tables, a good burger or moules frites and onion soup. But what really drives the kitchen is the gastronomic and molecular cooking that delivers familiar flavors through unexpected mediums. If cheese or cream graces a plate here, it often comes as a mound of bubbles, providing taste without heft.

“The thing that I had trouble with in the City  was you had to prepare yourself to go out to these three star Michelin restaurants,” Orlandi said. “It’s a whole preparation to get to that level of eating; you’re walking in and you’re almost nervous to sit down. Here we wanted to concentrate on flavors and food without even having to get into that mind-set.” But Roots is more than using food science to offer suburbanites dishes on par with the City’s. Attempting that would have been easier, given Corbet’s year of experience as executive chef at Bouley and Orlandi’s time working at Jean Georges at The Trump International Hotel & Tower. 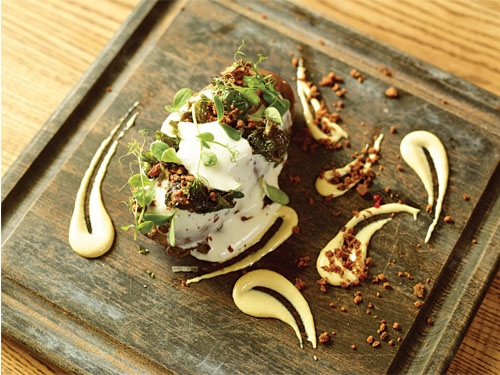 Not your average loaded baked potato. The Roots version has pickled fennel and smoked salmon topped with a cheese foam. image: rick wenner

Instead the two think about the flavors and how to make them approachable and the answer is usually rooted in method. “It’s all about the technique,” Corbet said. “Right now the menu has wagyu beef and if you were in the City, six ounces of it is going to cost you $90. We took the less expensive cut, but applied technique: We strip the meat, take the silver skin out, almost debone it from the fat but then we glue it back again, reconstructing it with a glue protein so we can offer 10 ounces for $40 because the technique is there to help us.”

A sketchbook sits under Corbet’s arm, filled with ideas for the winter menu. “For me it’s easier to draw and understand the way we’re going to eat it and plate it. Seeing all the different flavors on the plate makes sense for me,” Corbet said. It’s as if he can see flavor profiles. He described the Roots take on a baked potato. “The way it’s done, it’s more gastronomic. We’re going to have a layer of pickled fennel, house-smoked salmon, crème fraîche, caviar and cheese foam,” he said.

The menu changes four times  a year and each new class requires finding 20 recipes and testing them often. The process has hits and challenges, like the five attempts it took them to make good brioche. “That’s part of what being a chef is, creativity and imagination,” Orlandi said. “Accepting failures even. When we test for menus we find things that don’t work, but maybe next year we find a way to use them.”

Still, there are some combinations that are simply flawed from inception—the ones that no amount of molecular science can recu- perate. “You have to balance the comfort food and the gastronomy,” Corbet said. “Because you can take white chocolate and white truffles and mix it together and be like ‘Oh I made this,’ but it won’t work because it’s disgusting.”

“Which we try every once in a while,” Orlandi said, with a laugh.