For more than a century Raffetto’s modest storefront at 144 West Houston St has been creating perfect pasta. The fresh noodles are supple and toothsome, full of yolky flavor and the nutty taste of wheat. They serve adeptly as a platform for a light sauce, but also contribute flavor on their own, and while the pasta itself is irresistible, its star quality is best appreciated in a supporting role as the envelope for ravioli.

Opening the door to Raffetto’s produces a raw dough smell and a floury haze on your shoulders. Along the west wall behind a long counter is a library of bins that contain dozens of configurations of dried noodle: spirale, garganelle and “long spaghetti” long enough to tickle the kid in all of us. Above the bins are Italian staples: aqua minerale, anchovies, canned tomatoes and those current cakes in the red boxes. 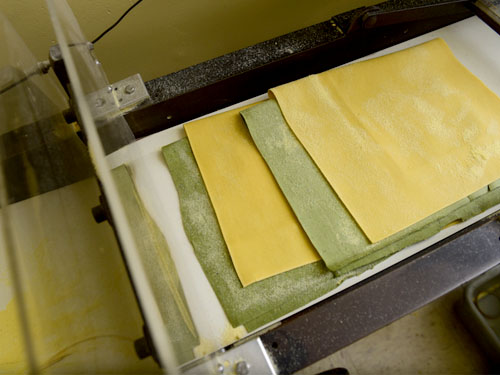 About 10 feet uptown from the counter is the pumping heart of Raffetto’s: A pasta cutter that’s been in constant use for 99 years and counting. Grandpa Marcello Raffetto bought the pasta machine in 1916, and although the model and style were discontinued around World War II, the Raffetto’s unit is still going strong. The machine makes a round, rhythmic “whomp” as it divides sheets of dough into noodle thicknesses from angel hair to lasagna. It beats a tattoo that seems somehow too loud, too industrial, to occupy the same space as paying customers. It builds to a crescendo, whompwhompwhomp, then Dopplers away as each order is filled, whompwhomp whomp, whomp… whomp … It leaves everyone in the vicinity half deaf.

The pasta the machine slices is an ideal that’s rarely realized anywhere in the world—including Italy. Salt, pepper and a bottle of just-opened olive oil are all you really need to appreciate the quality, but the signature manifestation of Raffetto’s pasta is as ravioli. 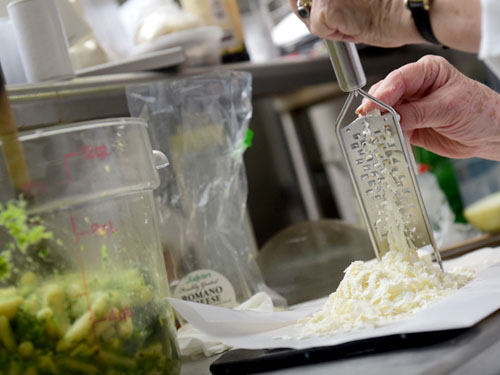 107 years ago the shop produced only egg noodles, Genoa-style meat and spinach ravioli and Naples-style cheese ravioli. They expanded their catalog in the 1970s when ravioli began to gain traction and the expansion has not yet halted. Today Raffetto’s embraces newfangled fillings like pumpkin, goat cheese and Gorgonzola walnut. They even jazz up the dough, whomping out sheets of seafood ravioli in black squid ink pasta and grilled vegetable filling in spinach pasta pockets. They sell the ravioli retail to loyal customers and wholesale to heavy hitters like Da Silvano, Il Mulino and Po.

Although they have modernized over the years, Raffetto’s has done so gracefully. They use chestnuts and saffron now, sure, and you can find their signature zig-zag edges in specialty shops like Fairway in Garden City, but the storefront is still firmly rooted in the past. Raffetto’s is a cash only business and it’s closed on Sundays and Mondays so the staff can be with their families. It’s a beguilingly humble approach in a place that makes the greatest pasta in the world, but that’s what makes Raffetto’s special, that and a pasta cutter that’s been going whompwhompwhomp for the last 99 years.

Do you know a place West of LI that’s worth fighting traffic? Let us know: words@nulllipulse.com