Our national relationship and history with China is complex. While we don’t see eye to eye on many important things, we seem willing to shake hands tentatively and look the other way to keep the international cogs churning in relative peace. That aside, aesthetics have always bridged the divide between East and West. In a sincere effort to enhance that artistic cohesion, Long Island printmaker Dan Welden will curate Wielding The Knife, an exhibit that brings the massive, and massively intricate works of Chinese printmaker Li Kang to the Long Island Art League (and to the United States for the first time).

The exhibit will represent an achievement not only in international relations, but also in display logistics. Due to their massive size, Li’s prints require groups of three and four people to carefully unfurl for display. The team at the Art League has only attempted this process once, and will not do so again until the unveiling this month.

Li is a deputy secretary of the Print Arts Committee of the Chinese Artists Association, as well as deputy director of the Guanlan Original Printmaking Base and director of the China Print Museum. His intricate wood etchings with pastoral themes have been displayed throughout China and other Pacific nations including the National Museum of China, numerous regional Chinese museums, the Taipei Fine Arts Museum the South Korea Print Museum and the British Woodcut Foundation.

The Guanlan Original Printmaking Base is a government controlled workspace that puts its muscle behind experienced Chinese and international printmakers. Artists from all over the world work at Guanlan by invitation, and Welden, from Sag Harbor, took up residency there several times in recent years. 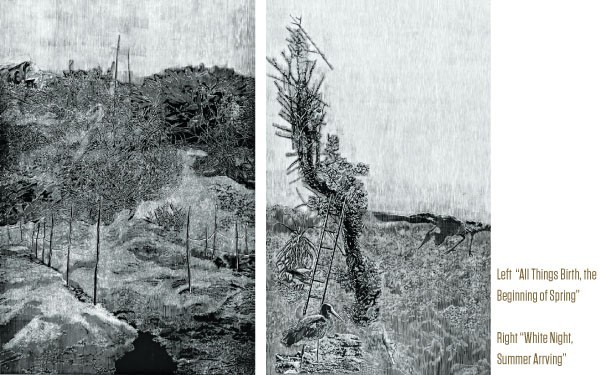 “It started with the Guanlan International Printmaking Biennial in 2011 where my work was accepted,” said Welden. “I was then invited to become a ‘resident artist’ during the time of the opening ceremonies. They do it up big in China, with cannons and lots of pomp and speeches. [I think I was asked] only because it was around Christmas and my blue eyes and white hair made me look like Santa Claus.” Welden was, of course, honored by the invitation, and the Li exhibit is one way he hopes to reciprocate.

Before understanding Welden’s desire to return the favor to Li Kang, it’s worth spending a moment appreciating the Long Islander’s work. While he’s not exhibiting at the same time as Li, a quick tour of his website (danwelden. com) will reveal a host of works from the surreal to the serene. His solar plate pieces (see “Appalachian Spring” or “Antarctic Thirst”) are wildly sparse, abstract and haunting.

The sense of radioactive evil, X-ray madness leaves us cold but contemplative, a nosedive into negative space. His hybrid works on paper (see “Scarlet Valet” or “Paradise Found”) are decidedly warmer with their pastel swatches of pink and blue abstract beach. In these prints, the moment in which sun, sand and sea meet is implied, leaving us warmed by a sun we know is there but cannot see or feel. Welden takes this warmth with him wherever he goes, whether he’s working on the North Shore, the Far East or in other corners of the globe where his curiosity and talents have taken him.

“I bring my heart wherever I go,” said Welden. “The inspiration always exists. What’s different is the particular energy that comes from various places. [Working in China] is all work though. It’s very business-like.” 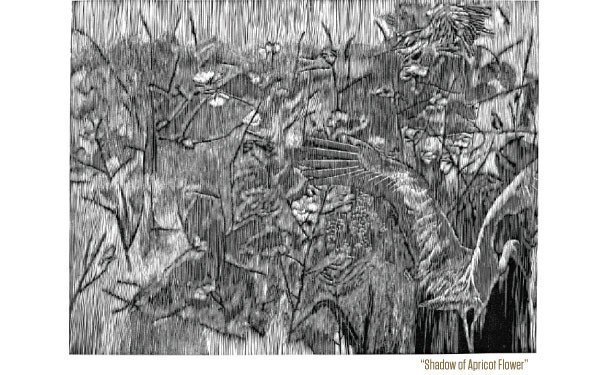 Welden’s interaction with other artists at Guanlan led him to experience other “energies” as well. His interaction with Li however, was limited, which only amplified the myth around the master. “He’s the head of everything over there in terms of the printmaking center,” said Welden. “He’s in the upper echelon and he doesn’t speak English, so I worked through his assistant.”

Li’s etching and wood carving process is painstaking. In that context, the level of intricate detail in all of his works—large and small—is staggering. “All Things Birth, the Beginning of Spring” is an exercise in the contrast of winter’s thaw, when pale tree bark starts to peek through melting mountain snow. “White Night, Summer Arriving” has a metaphorical feel: A rickety wooden ladder sits propped against a gnarled and twisted tree branch as a lone water bird patrols the perimeter. In the distance, open fields of reeds meet the sky. The image is wonderfully lonely, inviting imagined narratives of love, loss and the Tao of solitude.

Welden and Li are an interesting coupling of yin and yang. They are two men working at the top of their game, interpreting nature with heart and vision. Welden, a soft spoken man who leads with passion, will surely have much to share regarding his Far East experiences as he celebrates the natural wonder—and wonders—of Li.

Wielding The Knife will be on display at the Long Island Art League from Feb 1 to March 8. A reception for the artist, who is making the trip from China to Long Island for the event, will be held on Feb 8, from 3–5pm. Dan Welden will discuss his residency at Guanlan in a lecture on Feb 17 at 7pm. The Jeanie Tengelsen Gallery is open free of charge Monday through Thursday 9am–9pm, Friday 9am–4pm and weekends from 11am–4pm. The Art League is in Dix Hills. For more information call (631) 462-5400 or visit artleagueli.org.