Everyone knows someone who does CrossFit. Whether they’re gym rats who can name their benching personal record off the top of their heads or everyday fitness enthusiasts looking for a bigger challenge, the sport of CrossFit attracts all kinds. But its nationwide success has brought it plenty of attention, not all of it positive.

Like any trend-worthy fitness routine CrossFit gets its share of flak. Anecdotal claims and science backed studies have brought the workout under a critical eye with accusations of higher injury rates than other training regimens. But Dr. Stuart Cherney, the lead orthopedic surgeon at All-Sport Orthopaedic Surgery in Smithtown and one of the first sports medicine specialists on Long Island, said enthusiasts should give those studies another look. “From what I’ve read of these studies, they are based on small numbers of participants and many are flawed. The information from these studies is more food for thought than scientific evidence one way or another,” he said.

According to the study, these athletes tend to see faster conditioning gains because of the training’s intensity. The average gym goer is probably not performing such rigorous activities—like a rapid succession of burpees followed by box jumps and pull-ups. And even those workouts that follow a similar successive, circuit style don’t do it with the frenetic speed and ferocity found inside a CrossFit gym. 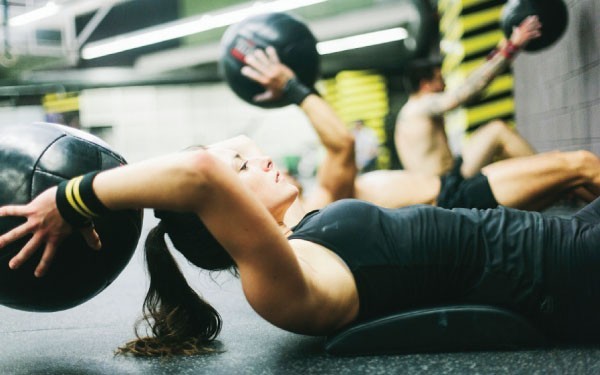 In fact, additional research has shown that CrossFit has the same level of injury as any other intensive physical workout, and Cherney said he isn’t seeing large volumes of injuries from the workout at his practice. “A study in the Journal of Strength and Conditioning in 2014 said the injury rate is similar to weight lifting and gymnastics. If you enter a training program with good supervision and a good understanding of your physical goals, then your injury rate should be no different.”

But although the physical risks may be small, there is another fear keeping the curious out of the gyms. “People get a little intimidated because of [CrossFit competitions] they see on TV, but that’s not how a regular class or gym is really run,” said Ryan Hughes, owner of Port CrossFit in Port Jefferson Station and a competitor at the national CrossFit Games. “There’s a way bigger range of people who do it on a daily basis.” Port Jefferson resident Adam Jarrett took classes for about six months at two Long Island gyms. “I did know that it was going to be different and intense, but the first class was a body awakening,” Jarrett said. “The classes are designed to push your body to the limit. After the first class, I felt immediate, complete exhaustion. But an hour later, your body recoups and you feel great.”

While every gym is run differently, there are a few constants. Typically, the instructor-led courses begin with a mobility-focused warm-up that can include laps around the gym, push-ups, sit-ups and stretches. Then it’s time for the Workout of the Day (or WOD, in insider speak). Jarrett said every day there is something new, something your body has never done before. The workout consists of strength or skill work (barbells, squats, dead lifts, etc.) and conditioning, which can include kettle bell moves, rowing, running or biking.

“One of the biggest myths is that all these gyms are the same,” Hughes said. “It’s like if you were to walk into a deli here or across town and expect them to be run the same way. The only thing that’s the same is the CrossFit name on the door.” Hughes’ gym makes a point of keeping class size low—10 people max—so the instructor can keep an eye on everyone’s form and every new participant undergoes a personal training session to assess his fitness level. If someone doesn’t have a full range of motion or the requisite level of strength for the class, Hughes won’t put him in a group class until he’s ready.

Jarrett’s own CrossFit experience reinforced this lesson. “I have tried out two locations, and the most important thing I learned is that the trainer is such an important key to this workout. When I go back, I will go with the first location because they were all about proper form and safety,” he said. “You have to know your body limits. There’s a lot of competitiveness in the class that you have to ignore to focus on what you can accomplish safely.”

And when CrossFit is done right, the results are evident. One of the many benefits of this kind of training has long claimed to provide is an increase in noticeable results—meaning its participants get leaner and stronger faster than almost any other workout. It sounds like fodder for a billboard, but many of those claims are backed up in scientific studies. “There is some suggestion that the gains in conditioning in CrossFit can occur at a very rapid rate and lead to high levels of conditioning,” Cherney said.