The trendiness of health consciousness is nothing new. America underwent a “reducing” craze in the 1920s, a prenatal pharmaceutical fixation in the 1950s and a bicycle boom in the 1970s. Today digital fitness is all the rage, and it’ s easy to see why.

Whether it’s smartphone applications that require users to input basic information or fitness trackers that simply need initial programming, it’s never been easier to manage the three pillars of health: diet, exercise and sleep. Add the social media aspects of these technologies into the mix and it’s no surprise that the market for digital fitness has exploded. Research firm ON World estimates that 700 million wearable fitness devices will ship globally within the next five years, and that by then the technology will be a $50 billion industry.

That estimate makes sense to Syosset-based nutritionist Karen Ansel, who believes that the popularity of these devices and smartphone applications is rooted in accessibility. “In a perfect world, everyone would be able to have their own personal dietitian,” she said. “Since that’s not an option for most people, technologies that allow you to record what you’re eating and give you instant feedback about the nutritional quality of that food can be an immensely helpful tool for people who are watching their weight. The same goes for exercise.”

These applications go beyond analysis, using manually logged information to track progress, customize reminders and advise users on how much and when to eat. Some of the popular fitness trackers vibrate or flash lights to inform users they’ve been stationary too long. To top it off, these devices encourage users to share their progress online and engage in friendly competition with friends and family members. The social aspect is critical, and it’s why SNS Research anticipates that the market for these products will experience a 40 percent year-over-year growth rate for the next six years.

In the current instant-gratification economy, having data literally on hand is invaluable. For Mike Lynch, a Bethpage-based certified personal trainer, that’s the cornerstone of the industry’s success. “People are gravitating toward this because they want immediate results,” he said. “It can benefit someone who’s sedentary and doesn’t exercise, and is making the decision to embark on a new fitness routine. But if people are looking for magic, it’s going to fail them.”

In nearly two decades of personal training, Lynch, 41, said he’s never counted calories or measured the intensity of his workouts using any devices. But, he’s not a product of the digital age. If these tools provide motivation and help people hold themselves accountable for their health and fitness, he’s all for it. “People just need to work hard,” he said. “It’s called sweat.”

“Plus [they’re] fun,” Ansel said. “Who wouldn’t love a gadget that can motivate you to move more and eat better?”

What about sleeping better? Sound sleep is critical to mental and physical health, and devices that measure and quantify sleep are raising awareness to that end, according to Peter Ottavio, a critical care physician and pulmonologist specializing in sleep medicine at Mather Hospital in Port Jefferson.

“People are becoming more conscious that sleep is a big portion of our lives, about a third, ideally,” Ottavio said. “But we don’t really know what’s happening during sleep and we kind of want to know, ‘How am I doing compared to everybody else?’”

Although somewhat newer to the digital fitness industry, sleep sensors are making an impact. Some 10 percent of Ottavio’s patients at the hospital’s Sleep Disorder Center have asked about them or are bringing in data they’ve compiled using the devices. “These are things that people are bringing to us, showing us these iPhone apps and saying, ‘Listen, this thing is showing that I’m having multiple interruptions at night.’”

Ottavio said there’s no doubt this is helpful for people trying to determine whether their sleeping problems are the result of external factors like light, noise, temperature or stress. But he emphasized the importance of using the devices in concert with a diary or under the supervision of a physician, because they simply can’t identify potentially serious issues.

Most sleep sensors, like ResMed’s S+ and the Sleep Cycle app, use radio frequency to monitor respiratory and body movements, and then identify the different phases of sleep the user is experiencing. But they can’t detect the most common sleep disorder, sleep apnea, or provide a meaningful analysis for people on medications that intentionally inhibit REM sleep, according to Ottavio.

Still, Ottavio believes that for the right people, all of these health-tracking devices can be put to good use. “It’s great that it’s a much more affordable, portable thing to have in your home and use on a daily basis,” he said. 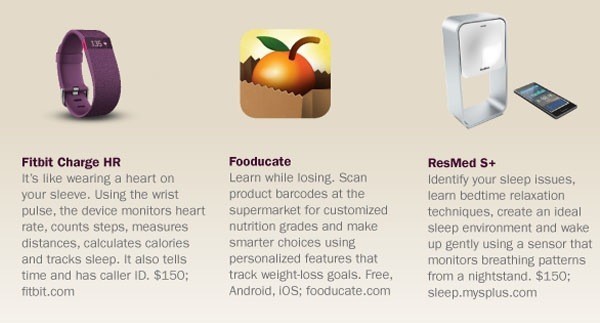 Tech Times Three
Digital and wearable technology has made monitoring health a cinch: Use wrist bands to track your activity and exercise, phone apps to record diet and nutrition, and sleep sensors for sound slumber.