There’s no denying that Americans love coffee. There’s a Starbucks on every corner and millions of people gulp down java every day. But there was a time, long ago, when Americans loved coffee’s sibling, tea, as much as the rest of the world. And in recent years, as gourmet coffee has become more popular, people have also started to turn to myriad blends of tea for their morning pick-up. If Americans are married to coff ee, then tea is their mistress.

After the Boston Tea Party, many American businesses and homes began offering coffee instead of “that British drink.” Still, tea survived and is now the most popular sipper in the world (if you don’t count water, which we don’t.)

It’s sometimes hard to be among the minority in the land that worships joe, but three women have opened teashops on the Island. They’re off ering brews and accessories that aren’t available at gourmet coffee places and they’re guiding people beyond Earl Grey to exotic imports from India and China, delectable baked goods to go with them and a pleasant atmosphere in which to enjoy it all.

Long Island’s tea revolution has begun, and it is delicious. 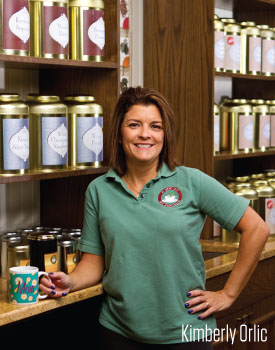 A New Leaf, Garden City
Opened: 2012
Owner: Kimberly Orlic
Kimberly’s Favorite Tea: Lapsang Souchong
Kimberly Orlic has been drinking tea since she was a child. Her husband, Ivan, is from Croatia and the two drink a lot of tea when they go to Europe. Owning her own store had always been a dream, but it had to be under the right circumstances.

“We always wanted to be [in Garden City],” she said. “We live a town over. And this area was always very appealing. When the space became open, we had to make a decision whether to do it or not. We took a chance.”

Orlic quit her job at Hofstra University, where she had worked for 22 years, and opened A New Leaf. Now she sells more than 100 types of tea (mostly flavored, like Cote d’Azur Garden, Wild Monkey Marsala, Long Island Strawberry Green Tea, and one of my favorites, the Monk’s Blend) as well as teaware. The store has a small seating area, but most of Orlic’s customers buy in bulk instead of by the mug.
The large front windows look out onto an idyllic street in the downtown, making it an ideal place for people watching. The subtle smell of tea fills the space. The hundred different blends that Orlic sells come together to create an aroma that is arousing to the senses and soothing for the soul.
The centerpiece is also Orlic’s favorite part: The sensory table. Sixteen clear glass teapots hold a selection of some of her newest leaves. Customers can open the pots to take in the aroma for a sense of the flavor. The teas rotate as the seasons change and new blends come in.
The store caters slightly more to the popular tea market. Orlic sells many flavored blends that her customers love, as well as more than 30 single-estate teas. Connoisseurs enjoy these for their high-quality leaves and their pure, unaltered flavor.
Orlic is a connoisseur herself and wants to help others learn as much as she can. She hosts tastings where participants learn how to measure out the correct amounts, the proper temperature water to use, how long to steep, what food pairs well with specific types and so forth. “We examine the dry leaf, the wet leaf, the infused cup,” she said. “Learn what pairs with that tea. What to have with green tea and what not to have with green tea. We never do flavored teas. They’re always single-estate teas.” 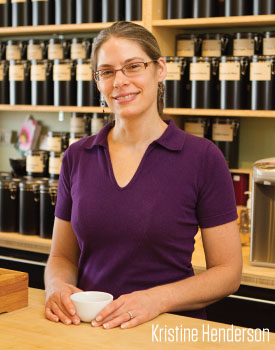 Infuse Tea Bar, West Sayville
Opened: 2013
Owner: Kristine Henderson
Kristine’s Favorite Tea: “I don’t like to drink the same ones. Life’s too short to have a favorite tea”
Kristine Henderson accidentally fell in love 20 years ago when she unknowingly ordered loose leaf tea from a catalogue. She hadn’t been a fan previously, but tried the loose variety and loved it.
“I realized loose tea was far superior to what I could get in a tea bag,” she said. “I kind of became addicted to it once I discovered that.”
Henderson needed a change in her work life and started selling teas at craft fairs in 2007. She would run workshops and seminars at libraries, private businesses and in peoples’ homes. “I chose tea because I loved it,” she said. “I found that most of the businesses on the Island—and there weren’t many back in 2007—were focusing more on the afternoon tea and the British style of tea. I figured if there were other people out there looking for teas like I was, that I would be the source for them.”
As her customer base grew over the years, Henderson realized she had enough of a following to open her own store. She found a cozy space in West Sayville and opened Infuse Tea Bar. Today she carries more than 300 styles of tea. Jars are everywhere—on shelves behind the bar, under the bar and tucked away in cabinets. About 10 of the teas are seasonal blends and around 30 of them Henderson made herself.
In addition to an extremely diverse selection, Henderson offers weekly tea workshops, each focusing on a different type or growing region. “The workshops are great because it gives people a chance to come in and maybe try something they never would have tried before. And we provide the education about what makes that tea unique.” 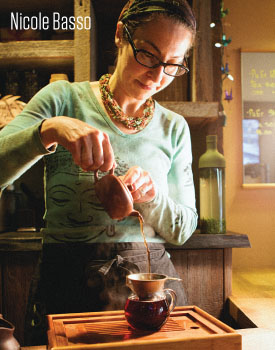 Sip Tea Lounge, Huntington
Opened: 2013
Owner: Nicole Basso
Nicole’s Favorite Tea: Japanese Matcha
Nicole Basso opened her store after spending time at the Huntington Farmer’s Market in 2009. She sold a handful of different herbal teas that she blended herself as well as traditional ones. Her experience at the markets eventually convinced her to open her own shop. “It’s a spa for tea,” said Basso of her enterprise. “People can come and just relax.”
For Basso, it began during her days at Skidmore College. There she developed a love of Asian culture. Her husband, Toshi, is Japanese and his sister would often send Basso delicious Asian teas. In 2001, the couple moved to California, where teashops and bars are more common. After a few years, they moved back to Long Island and Basso started to get involved in locally sourced food, which led her to the farmer’s market. Her friend Brian, who was running a stand for the Golden Earthworm Organic Farm in Riverhead, encouraged Basso to start selling her teas.
Sip Tea Lounge is designed to have customers come in, sit down and have one of 40 different teas and an organic snack. The bar has a very rustic feel: Tables and counters are made from rough-hewn stone and untreated wood. The ceiling is made of wood from a reclaimed barn in Ohio and the cabinet faces are recycled, too. “I’ve noticed that people make friends when they come in here. Everyone talks,” said Basso. “We get a lot of men in here and I’m not shocked at that. But a lot of people think tea and think big frilly hats and doilies. While we may have some of that—we have finger sandwiches and stuff —I wanted to make this an environment where everyone felt they could come.”

Related Content
Where to go for English High Tea on Long Island: An old-fashioned High Tea complete with finger sandwiches and small baked goods
How to: Host a Tea Tasting: Hosting a tasting at home isn’t as hard as it seems and can help spread a love of good tea.