Bright lights and Broadway marquees pervade the dreams of many aspiring artists. For producers Neal Rubinstein and Tom Kirdahy, a love for the theater eventually led to careers that put their names above some of the biggest shows on those marquees. Currently represented by On the Town and It’s Only a Play, respectively, they recently reflected on their unique paths from Long Island to the Great White Way. 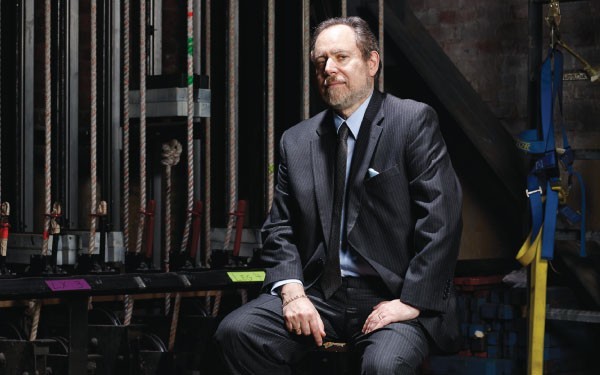 Neal Rubinstein
Credits: On the Town, The 39 Steps
Neal Rubinstein is a self proclaimed contrarian: At all major turning points in his life he has chosen the road less traveled. At age 23 he watched as all of his friends looked for work in Manhattan while he chose to look anywhere but (even scoping out prospective employers in Alaska.) The competitive nature of the City did not entice the former WLIR jock who went on to win three Emmys as an editor and producer for NBC’s Nightly News and The Today Show. When Rubinstein retired early and began to pursue a second career on Broadway in his early 40s, his friends’; careers were peaking. Now he’s 65 and those same peers are starting to retire themselves. I’m definitely marching to a different drummer,” he laughed. “That’s applied to me since I was in grade school at Lee Avenue in Hicksville.”

At the age of six Rubinstein took in his first musical, Bells are Ringing, which starred Judy Holliday and Sydney Chaplin. He was hooked from the first note and knew all the lyrics from a record his parents owned. “To this day I don’t know how they didn’t kick us out. I was singing along with the cast.” His parents aren’t the only people responsible for Rubinstein’s interest in all things theater. “In elementary school a teacher took me under his wing, Ted Savalas,” he recalled. “He ran the audio visual department at Lee Avenue. His brother was Telly Savalas. He got me involved with projectors and I became the AV nerd. I had a natural bent for it.”

Rubinstein handled sound design and technical work for a slew of regional theaters. But it wasn’t until the late 2000s when playwright Hans Holzer handed him the script for TROJANZ … NOT REQUIRED that Rubinstein ruminated on getting serious about producing. “I loved Broadway but I stayed away from it as a producer because I always felt it was the most risky. I said I wasn’t interested. Then Hans said the magic words: “I have a director. It was Hal Prince. I found out later he had a lot of friends like that.” Holzer died in 2009 and the show’s development was put on hold while Rubinstein invested in his first show, off-Broadway’s critically acclaimed Handle with Care. Doors opened and soon Rubinstein was an investor with Broadway’s Of Mice and Men, The Cripple of Inishmaan and Hedwig and the Angry Inch. Within a three week period I had three major shows on Broadway,” he marveled.

The same season brought Rubinstein his first credit as lead producer with the acclaimed, yet short-lived Estelle Parsons vehicle, The Velocity of Autumn. Currently represented by the hit musical On the Town, he shows no signs of slowing. “I could listen to the music all the time,” he said of On the Town. “This is the kind of thing people are looking for. We figured people in their fifties, sixties, seventies would be coming to see the show. Nope. We get people in their twenties and thirties. They’re seeing a show pretty much for the first time the way shows were written forty years ago. That’s the beauty of it.”

Rubinstein continues to commute into New York from his childhood home in Hicksville. He has resumed work on TROJANZ with great enthusiasm while simultaneously producing off-Broadway’s Tail! Spin! and a new off-Broadway production of The 39 Steps, which is set to feature some of the original cast. As if that weren’t enough, he is also wearing the producer hat for the film Ron and Laura Take Back America, a multiple award winner on the festival circuit. “All of a sudden I’ve got all of these different projects I’m involved in. It turns out this is a passion. I should have been doing this for years. It happened later in life, but I’m having the best time of my life.”

Tom Kirdahy
Credits: It’s Only a Play, The Visit
Tom Kirdahy always knew that he wasn’t an actor, but that didn’t stop him from putting on shows in his backyard. Of course, it didn’t hurt that Tony Award winner Donna Murphy grew up across the street from him in Hauppauge. “Obviously she was the lead in all of our shows,” he laughed. “We used to have these beauty pageants. Donna was always Miss Talent and I was always Miss Congeniality.”

The producer also credits Hauppauge High School’s librarian, Bill Lupine (Patti’s brother) with inspiring his passion for theater. “He took us to see Evita three times and that really fed my love of the form. Frankly, just growing up where you could get on the train and see shows independently at a young age was a gift.” Kirdahy gets nostalgic when he remembers the excitement of waiting in the TKTS line for a matinee. “I worked at a Dairy Queen and all my money went to theater tickets.”

Kirdahy’s love for theater led him to law school with the intent of becoming an entertainment lawyer. However, he eventually decided that his knowledge could be put to use in a more personal way. “At the time the AIDS crisis was getting worse. A great number of my friends were getting sick and dying. I felt that I needed to do something about the crisis that was decimating my community.” Kirdahy began providing free legal services to people with HIV and AIDS, and didn’t stop until 17 years later when he revisited his original dream of working in the theater.

Kirdahy continues to marry his past with his present, as was evident with last spring’s Mothers and Sons about the lingering effects of AIDS. The play, which was nominated for two Tony Awards and was written by Kirdahy’s husband, Terrence McNally, was also directed by Tony-nominated Long Islander Sheryl Kaller. With his current vehicle, It’s Only a Play, Kirdahy’s team is fundraising for Broadway Cares/Equity Fights AIDS.

“I’m very hands on. I see my role as giving the artists a safe and fertile space. To let artists be their best selves. We’re all committed to the common goal of making the production the best it can possibly be.” Kirdahy’s philosophy is clearly appreciated, as is evident with the starry lineup in It’s Only a Play: Matthew Broderick, Nathan Lane, Stockard Channing, Megan Mullally and Rupert Grint. (Read our review of the show on lipulse.com.)

“We had wonderful stars, so we knew it would go well. [But] this has exceeded every hope or expectation. This is crazy! It’s fun. I think it’s very clear that audiences are starved for laughter. They’re just screaming, laughing. I think people are fascinated by the story because it’s something they’ve never seen before. They’re witnessing in real time what happens on an opening night when people read a review of something they’ve put their lives into. They’ve worked so hard for this moment and then they’re publicly evaluated.”

Next up is this spring’s The Visit, which was a favorite at the Williamstown Theatre Festival last summer. Kirdahy is looking forward to teaming up with star Chita Rivera on her return to Broadway. I’m living a dream. Chicago was the third show I ever saw and now I’m working with Chita Rivera and John Kander. When you’re on the Long Island Rail Road and you see all of those show posters; to dream about being able to see them is one thing, but putting them up and working with all of these legends is something different entirely. I don’t take anything for granted. I know I’m the luckiest guy on the planet!