It’s impressive when a musician was part of a groundbreaking rock band. But what about someone who was part of not two, but three bands that left their mark on music? Drummer Marky Ramone, real name Marc Bell, is in select company, having kept the beat for one of punk rock’s all-time greats, the Ramones, as well as hitting the skins for trailblazing punk act, Richard Hell and the Voidoids and the proto-heavy metal trio, Dust. Ramone covers all these bases and his personal life in his autobiography, Punk Rock Blitzkrieg: My Life as a Ramone, released Jan 13 by Touchstone Books.

“Dust was one of the first metal bands in America,” Ramone explained to Pulse. “There was really hardly anyone else around in 1970. Obviously, the English were ahead of us on that—we were a year behind in metal. But the songs were written before a lot of these bands came out. And Richard Hell and the Voidoids’ ‘Blank Generation’ was definitely an anthem for the CBGB’s scene. They could relate to it, what the words were—‘I belong to the blank generation, I can take it or leave it each time.’ But then the Ramones, everybody knows about that… their influence in the music business. From Joan Jett to Billy Idol to Green Day to Rancid to Offspring, you name it.”

The drummer’s book—co-authored by Rich Herschlag—is not the first to be penned by a former Ramone (or a person close to the band). But according to Marky, his book tells the real story. “It’s a lot more informative. The touring and the recording sessions and everything, that’s the meat of this business. I was able to account for where I went, what dates, how we toured, the personalities of each member. It was like a family.”

Ramone also tackles a lot of the history of punk before he joined the Ramones. “There were a lot of other things that happened, starting with the original punk scene in New York, and playing with Richard Hell and the Voidoids. Touring with The Clash and Wayne County and the beginning of the punk scene at CBGB’s. Auditioning for the New York Dolls after their first drummer passed away. These are historical events in my life which led Dee Dee, Johnny and Tommy Ramone to ask me to join the band.” 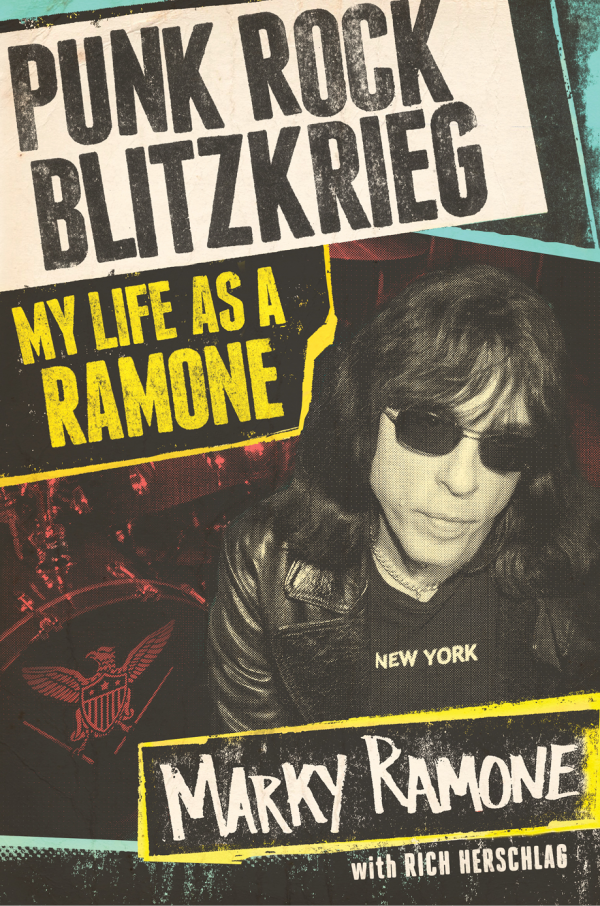 Other topics touched upon in Punk Rock Blitzkrieg include the early days of CBGB’s (“It was a hole in the wall…but it was a place for us to play”), Marky’s alcoholism (“I don’t care what anybody thinks about the fact that I had a drinking problem. I’ve solved it and it’s been 30 years—if I can help somebody through that, fine”), singer Joey Ramone’s battle with Obsessive Compulsive Disorder (“They gave him Prozac, which kind of helped, but not permanently”), and feuding between Joey and guitarist Johnny Ramone. “They passed away not saying goodbye, ‘We had a good run’ or ‘How are you doing?’” Marky remembers.

Ramone served as the drummer for the band during two stretches (1978-1983 and 1987-1996), and recalls his initial impressions of his band mates. “Joey was very quiet, but when he went on stage, he transformed into a great, histrionic singer. Johnny was very business-like, very astute at knowing the business, which was important. And [bassist] Dee Dee was the main songwriter and a wild, crazy guy—that’s why we were very friendly. We were the closest in the band, me and Dee Dee. Every one of us was different.”

Lastly, Ramone hoped to clear up a misconception that followed the band throughout their career. “We were not brothers! The name ‘Ramone’ came from Paul McCartney. When he used to check into hotel rooms when he was in the Silver Beatles, before The Beatles, he thought it was an exotic name, so he used Paul Ramon.”