It’s easy to make fun of the XQ80 for a variety of reasons, the main one being its great size. Its nickname around my neighborhood was The Blob, for instance, no surprise since it seats 8 adults and can tow up to 8,500 pounds, or 10.625 large upright pianos. It’s also a guzzler, and guzzlers haven’t been in vogue since “Seinfeld” was in production. It’s paranoid about hitting stuff, too, beeping and booping at me as I pulled in and out of my driveway in an attempt to keep me from scraping its ginormous left and right flanks on cement walls. 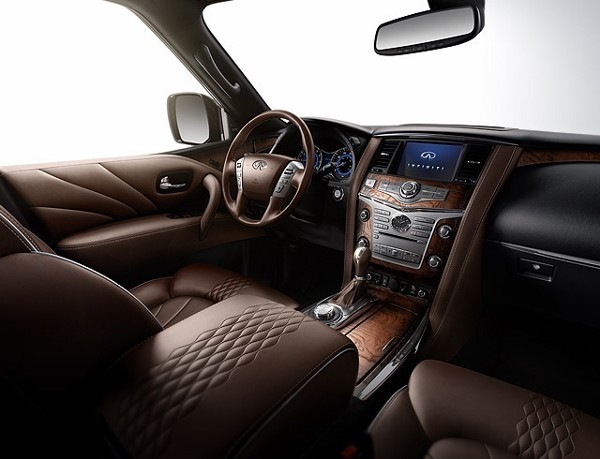 Luxury lug busts through heavy snow while others slipped and slid

But when mama nature downloaded the first winter smackdown of 2015, damned if the QX80 didn’t have the last laugh. Shovel? I didn’t need no stinkin’ shovel. I just pointed the vehicle where it needed to go and off we rolled to groceries, to the club, to another town 30 miles away and anywhere else required. The vehicle got a name change last year – it used to be the QX56 – and returns this year with a variety of freshen-ups including Predictive Forward Collision warning as well as a top-of-the-line flagship trim, the QX80 limited. For a few more bucks, you can go for Hydraulic Body Motion Control, which minimizes body lean when you’re cornering and delivers an overall smoother ride. The QX80 comes with a mighty 7-speed, 400-horsepower V8 as standard. It’s as quiet as a peeing spider, but one drawback is a lack of selectable terrain driving modes and no official off-road mechanisms unlike rivals Lexus LX or Range Rover. The vehicle does offer high and low-range modes, though, so if you’ve got your heart set on taking your $64,000 ride into the woods, you’ll probably do all right. The electronic aids are overkill but you may be glad they’re there when you’re in a parking lot or other tight spot.The interior is as plush and high-end as it gets; no matter the weather or terrain, you roll like a boss, conversation continuing quietly, music rich with high and low end, a peaceful road warrior even in heavy traffic. A sublime leather and wood motif is featured not only up front but everywhere, and all seats have plenty of leg room although the rear is slightly smaller. Your third-row seats have a power-operated folding feature and the second row folds, too, although not mechanically. Do you need all this metal, 24/7/365? Of course not. But when the elements pound the crap out of everyone else and leave them holed up in their abodes, it’s nice to know you can get to the store and back, to your kid’s school, or to score Chinese food in style and safety.