In the 1980s, Canadian master filmmaker David Cronenberg made movies in Hollywood. Two of them, The Fly and The Dead Zone, are among his most accessible and commercially successful films. Cronenberg’s brief liaison with Hollywood ended when he turned to subject matter that was too challenging for the studios’ corporate bean counters. Now, 20 years later, he has returned to bite the hand that once fed him with Maps to the Stars, a darkly funny vision of the greed and cruelty hidden behind tinsel town’s shiny facade.

Agatha (Mia Wasikowska) rides into Hollywood on a bus. At first glance, she seems to be just one more wide-eyed naif irresistibly drawn to the glamour of la-la land. However, a closer look reveals scars that hint at the secrets she conceals within. Agatha soon becomes entangled in the lives of several industry insiders and wannabes including Havana Segrand (Julianne Moore), an aging star who cannot escape the specter of her even-more famous mother; Jerome Fontana (Robert Pattinson), an aspiring filmmaker making ends meet as a chauffeur; Benjie Weiss (Evan Bird), a very spoiled child star with a growing list of bad habits even though his father is Dr. Stafford Weiss (John Cusack), a famous self-help guru. All of them will soon find their lives changed forever by the mysterious Agatha. 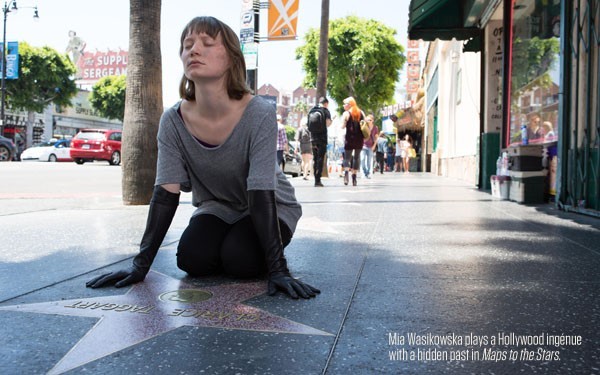 Cronenberg first made his reputation with a number of groundbreaking horror movies, including The Brood, Videodrome and Scanners. His later films have grown increasingly cerebral but even a comedy like Maps to the Stars crackles with a dark edge of menace and could even be accurately described as a horror film. For Cronenberg and screenwriter Bruce Wagner, whose novels (Losing You and Dead Stars) have established him as one of the foremost chroniclers of movieland excess, Hollywood is a literal ghost town haunted by its legendary past and filled with people who will sell their souls or commit any atrocity in pursuit of fame. Although Havana is the only one who might be stalked by an actual apparition, all of the characters are cursed by the devastation they have left in their wake and their devotion to a culture that worships selfishness and celebrity.

The stars of Maps to the Stars clearly relished the opportunity to directly explore the shadowy side of their own universe. Moore perfectly captures Havana’s intense desperation as she tries to remain relevant as an actress in a town where “menopausal” is one of the worst insults that can be directed at a woman and Wasikowska beautifully embodies Agatha’s particular mixture of innocence and insanity. But it is Cusack who nearly steals the movie as the malignant doctor Weiss. Playing against his famous charm, Cusack skillfully reveals how Weiss’ new age bromides and feel-good patter mask his total ruthlessness and willingness to sacrifice anyone, even his own child, to preserve his public image. Weiss’ true nature makes him the ideal poster boy for Cronenberg’s entertaining but nightmarish portrait of the Hollywood dream factory.