Will Connaughton has been a surfer since he was a young boy, but he only took up stand-up paddleboarding five years ago, mainly for exercise and adventure, but also to keep connected to the water.

“When you’re surfing, the conditions and waves have to be right, but when they aren’t good that’s when I go paddling,” said Connaughton, a West Islip resident who paddleboards in Suffolk County bays.

While he stops surfing in November, he continues to paddle on the bays through winter, or until he leaves to Florida. “If it’s freezing cold and you really don’t want to surf, you can still get out on the water and connect with the water,” he said.

Connaughton works at South Shore Paddleboards in Babylon, whose owner, Karen Marvin, also takes her paddleboard out on the Great South Bay and neighboring canals through winter. In fact, Marvin actively promotes this cold-weather activity on her shop’s website, which reads: “Never think that paddleboarding is just a summer sport. Anytime of the year is the right time for a paddle. Let nothing stop you. There’s a wet-suit for that.”

Starting from her waterfront home in Babylon, Marvin paddleboards nearly every morning during the summer and about two to three days each week in winter. Being a diehard paddleboarder, she noted, is no different than those who participate year-round in sports usually associated with warm weather.

“If you’re a bicycle rider, you’re going to ride 12 months out of the year,” said Marvin, who started paddleboarding nearly three years ago. “If you run, you run 12 months. Paddleboarding is a sport that’s implemented in your lifestyle.”

The sport is most popular in warm climes, especially Hawaii, California and Florida, and is relatively new but growing in the northeast and on Long Island. Marvin said that about half of her customers that buy paddleboards are newbies. She has observed that many Long Islanders who have been paddleboarding for several years are on the water all 12 months, having incorporated the sport in their lifestyles.

Among them is Lisa Scrofano of Oakdale, who struggled with surfing and turned instead to its less challenging offshoot sport five years ago. Scrofano paddleboards on the Connetquot River and Great South Bay most days in summer and once a week in winter, mainly to stay connected to the water and nature. 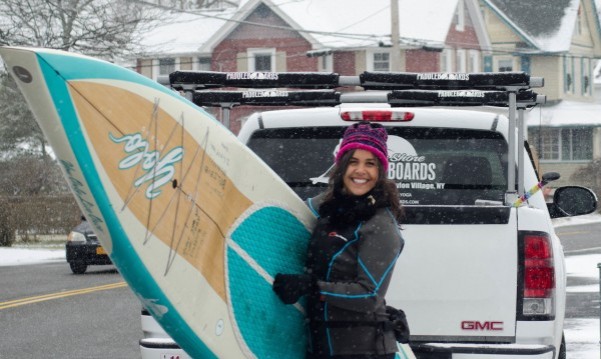 Karen Marvin owns South Shore Paddleboards in Babylon and tries to get on a board two or three days a week during winter.

She has noticed that while the number of paddleboarders on the water during summer has grown considerably since she first started, still scant few of them are around from November through March.

“In the winter, it’s pretty much you alone with nature,” she said. “There’s no boat traffic and the water is calm and clear.”

Before donning her wet suit in winter, she checks the forecast for harsh conditions and storms. Windy days, especially in winter, are to be avoided like kryptonite. She always carries her mobile phone with her for emergencies and to use its camera to take snapshots of wildlife.

“If there is an opportunity, I like to take photographs of the winter ducks, and if you’re lucky enough you’ll see a heron that is sticking around, as long as the water isn’t frozen,” she said.

Connaughton calls paddleboarding “very social” in summer, when he heads out with friends, bar hopping along Fire Island, or camping with them overnight on an island. In winter, though, it’s usually just him and a few seals on the water. “It’s very isolating,” he said, indicated he enjoys the time to himself.

Marvin too enjoys being alone on the water and occasionally coming across signs of wildlife and civilization. It serves as an enjoyable contrast to summer, especially when she paddleboarded for six hours and 25 miles around Manhattan island as part of a well-attended fundraiser event.

“When you’re out at six in the morning and you see the crabbers and the clammers and you’re the only other one out there, how lucky are you to be part of all of that,” she said. “It’s so beautiful.”