Legendary theatre critic Alexander Woollcott, whose penned praise or poison could make or break a show, titled a review “Harpo Marx And Some Brothers” after seeing the Marx Brothers open on Broadway with “I’ll Say She Is” on May 19, 1924. According to the book “Harpo Speaks,” Groucho woke Harpo up the next day from his home in Great Neck and read him Woollcott’s glowing article. Instead of feeling flattered, the normally chill Harpo bellowed “Didn’t the son-of-a-bitch say anything about you or Chico or Zeppo?” Yes, Woollcott had, but he had eyes only for the silent Marx and didn’t bother trying to give equal time to his siblings. I might say the same about my experience at the 2015 Chicago Auto Show. There I strolled, perusing the industry’s latest, greatest passenger vehicles, each buffed to mirrored sheens and surrounded by female models meant to coax journalists closer and hopefully write something positive. “Why am I not excited?” I asked myself as I passed the convertibles, the sedans, the SUVs, the hybrid, the electrics. “Could it be I’m burned out, jaded, seen-it-and-driven-it-all?” It’s an important show, too, the largest in North America and held more total times than any other auto exposition. “Come on, Max,” I said to myself. “Get revved.” Alas, I could not. 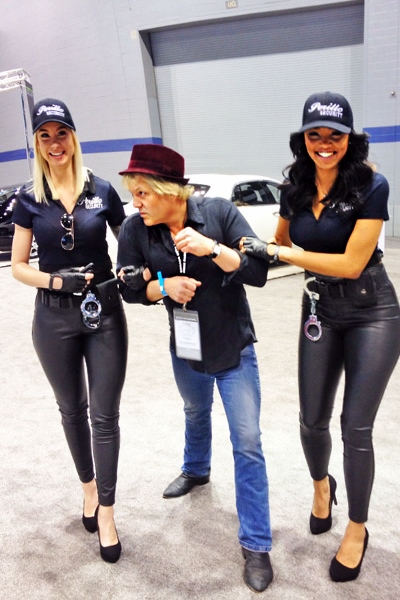 Then I came to a tiny area, tucked away at the end of one hall. This small section was surrounded by security, in this case four tall, fit uniformed females, each carrying a pair of steel handcuffs and wearing expressions fit for guarding Riker’s Island. I entered through the barriers and was surrounded, my ID demanded and surrendered, and finally pronounced OK. And there they were – Ferrari, Bentley, Maserati, Lamborghini and the rest. But I had eyes for one ride and one ride only; the Bugatti Veyron 16.4 Grand Sport Vitesse. I’d driven the 2013 model and, ever after, the question “What do you think of the Maranello, the R-8, the Gallardo?” would be answered with “They’re ok.” The questioner inevitably demanded “How can you say those cars are just ‘ok?’” Because when you’ve driven a ride with a 1,001-horsepower, 8.0-liter, quad-turbocharged W16-cylinder engine, you get a little jaded. It also so happens that this fall, I’ll be in France driving it again. You can’t blame a guy for being drunk on such a vehicle any more than you can blame him for staying married to a wonderful woman his whole life. When you’ve got the best, who needs the rest? Finally, it was time for me to go. But not without a fight.