In Saint Petersburg, from the moment the white nights arrive in late spring, crowds gather along the canals fronting 18th century pastel palaces to watch ships passing through open bridges. This goes on until 5am. The enchanting 80-day period from late May through July sees twilight linger long past midnight and allows the throngs at the Neva River to marvel at the reflections of pink, peach and lavender clouds. It’s a wonderful time to visit the city.

On one riverbank, the golden spires of the Cathedral of Saints Peter and Paul appear in duplicate, as if to underscore the importance of the site where Peter the Great, three Alexanders, Czar Nicholas, Czarina Alexandra and their children are all buried. On the opposite bank, the gold-plated dome of the 19th century St. Isaac’s Cathedral—the largest Russian Orthodox basilica in the city and the most ornate—looms behind the equestrian statue of Peter the Great, the Bronze Horseman. Catherine the Great’s memorial to her predecessor is an imposing sculpture that dominates the riverside park in Senate Square and attracts locals, tourists and entrepreneurs hawking cruise barge tickets. 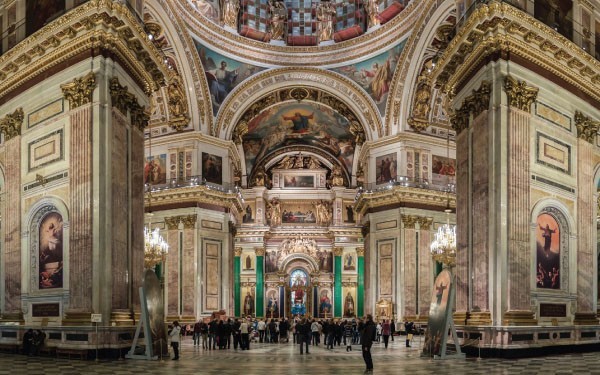 St. Petersburg is one of those world destinations where architecture, art and history trump politics and forever lure visitors, including my friend and me, for its bewitching blend of classic culture and modern innovation. At the Four Seasons Lion Palace the concierge gave us walking directions to nearby sites: The State Hermitage Museum, the canal cruise, the hydrofoil to Peterhof Palace (Peter the Great’s waterfront summer palace with extravagant fountains and gorgeous gardens) and the hop-on/hop-off tour bus. The bell captain instructed a series of taxi drivers, who appeared on successive days, where to take us and when to pick us up, and even helped us broker a full-day trip to Catherine Palace— Catherine I’s dazzling, pastel blue and gold, Rococo summer home in Pushkin.

Like many visitors to St. Petersburg, we longed to take in the vast collection of 19th and 20th century European paintings at the Hermitage—one of the world’s greatest art museums. Canvases by Cézanne, Derain, Gauguin, Monet, Picasso, Vlaminck—and my favorite, Matisse—are housed in the Baroquestyle, green and white Winter Palace, the former residence of the tsars. 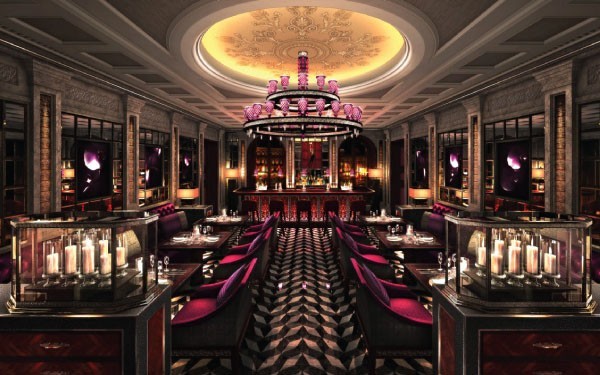 The warm opulence of the Four Seasons

Between 1895 and 1914, two prominent Russian collectors, Ivan Morozov and Sergei Shchukin, amassed huge collections for their private museums. Shchukin, a pre-Soviet businessman, individually collected 258 paintings for his palatial Moscow home. His holdings included Monets, Renoirs, Cézannes, Van Goghs, Gauguins and an astounding 50 Picassos. After the Revolution in 1918, comrades Morozov and Shchukin “donated” their collections to the people. The paintings were put on display until 1948 when the works were declared counter-revolutionary and locked away for decades.

Many artists and art appreciators risked their lives and their freedom to preserve the masterpieces until it was safe to once again put them on display. Today, the Hermitage—still full of opulent rooms and a stunning marble staircase—is a fi tting shrine to the dedication of those preservationists. And although the black-clad guards—many of them elderly women—don’t speak much English, they are clearly earnest in their desire to safeguard their cultural icons from visitors’ fingerprints.

Speaking of cultural bastions, few things compare to ballet on the historic Mariinsky stage. We purchased tickets (online) for Les Sylphides, entered the pale green neoclassic theater and took our red velvet seats adjacent to the Tsar’s Box. Around us the men were dressed in elegant black tie garb and gowned women balanced atop towering five-inch heels. Staring at the architecture during intermission rivaled the extravagance of the performance itself. 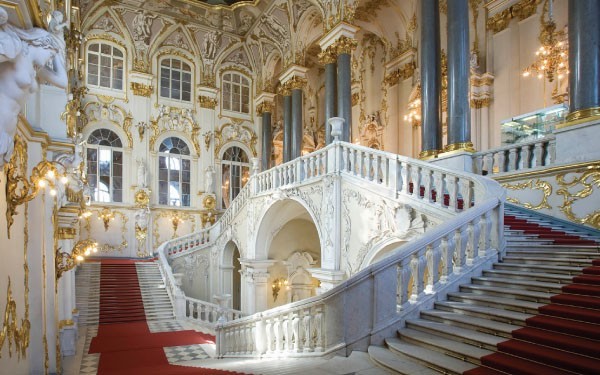 I was also eager to visit the Fabergé Museum within the Shuvalov Palace, where the grand staircase, parquet fl oors and silk-lined walls have been immaculately restored. Entrepreneur Viktor Vekselberg repatriated about 1,500 objets de luxe by the goldsmith Peter Carl Fabergé at enormous expense. He paid almost $100 million in 2004 to acquire nine imperial eggs—given by the Tsar to his wife and mother—and six nonimperial eggs from the Forbes collection. My favorite of these precious ova, The Orange Tree Egg, hides a tiny bejeweled nightingale within leaves of nephrite beset by amethyst, ruby and diamond fruit.

The Four Seasons Lion Palace—which opened in 2013 within the meticulously restored 19th century House of Lions on St. Isaac’s Square— is decorated with the pastel shades mandated by Catherine the Great. During our three-night stay at the neo-classical yellow and white hotel, we enjoyed facials at the new Luceo Spa—treatments that concluded with a swig of topnotch Tsarskaya Vodka, just in case we’d forgotten we were in Russia. 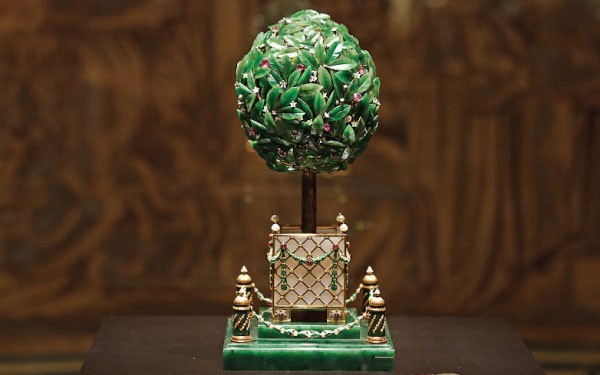 We spent our last two nights at the historic Hotel Astoria, which was updated with a multi-million-dollar infusion and the installation of an extravagant Tsar Suite decorated in an eclectic mix of contemporary furnishings and authentic Russian antiques. The 100-year-old, 5-star hotel, which has hosted a who’s who of international dignitaries over the years, survived the Bolshevik revolution, World Wars I and II, the collapse of the Soviet Union, and is still thriving. From our suite, we could practically see through the front doors of St. Isaac’s Cathedral and glimpse the eight massive malachite columns within.

Dinner is served late in St. Petersburg— especially during the white nights—so that people can appreciate the pale pastel sky well past midnight. Olivier salad—a traditional potato salad with diced carrot and peas—appeared on most menus. At the panoramic rooftop Bellevue Brasserie, it was served with sweet Kamchatka crab from the far eastern reaches of Russia. At a Tsar Tasting at the Lion Palace Tea Lounge, we indulged in generous portions of beluga, osetra and salmon caviar served with blinis, chopped eggs, capers and chives. There were chicken Kiev and beef stroganoff in all the Russian cafes, a 15-course Asian feast at the Buddha Bar and a salt-crust Cornish game hen at ll Lago dei Cigni—a glass-walled restaurant atop a swan-filled lake. 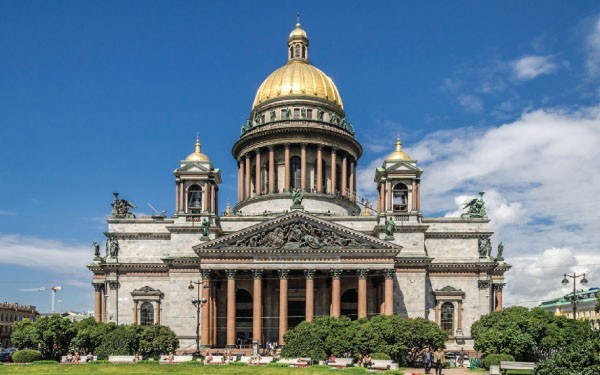 Though we worried about anti- American hostility, the people we met were exceptionally nice: near Peterhof, a woman ran in the rain down a gangplank to return my forgotten umbrella and everyone was delighted and curious when we revealed we were from the mystical land of New York!

St. Petersburg has always enjoyed a reputation for being architecturally appealing and culturally rich and those descriptions are well deserved. But what I found during my time there was that it’s also a much more sophisticated and cheerful place than I had ever imagined.