CW Post’s Hillwood Art Museum is going “street.” From early February through most of March, graffiti artist, professor and roving curator Ryan Seslow will present Concrete to Data, an exhibition that explores our socio-cultural evo/revolution through the vision of a collection of street artists as they move from bricks to bytes. 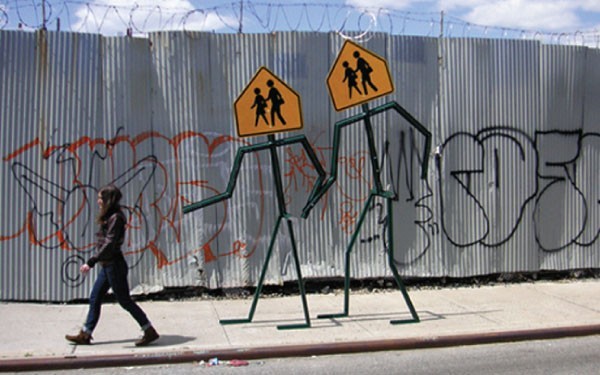 Leon Reid is a rarity: A street artist who incorporates sculpture.

The exhibit champions diverse approaches to graffiti as the form has morphed and expanded its significance from the 1970s through today and documents the styles, techniques, methods and messages that have developed during that trajectory. There’s some conceptual daring here; in a Miami-esque stroke (think Art Basel and The Wynwood Walls,) the exhibit will feature both on-site and off-site installations as well as an online presence that will change over time. Using everything from spray cans and stencils to cutting edge video and online tools, these diverse artists, under Seslow’s curation, have created a living, breathing cultural concept that channels the unrest and activism that drive street art. Seslow’s fascination with graffiti comes from his childhood years studying the intense pieces on and around the buildings near his parents’ textile business in Williamsburg. His course at Post on the history and aesthetics of graffiti is a groundbreaker, and he tries to bring his core ethos of cooperation via public display to both his classroom philosophy and his life and work. “[There are] lots of projects going on simultaneously, all interconnected and growing,” said Seslow. “I love creating collaborative projects. I have always been an artist, and all of my earliest memories are of making art and how happy it made me. I fell in love with graffiti at the age of 11. I grew up taking notice of the urban visual surroundings and how they were dictating to me what was possible in public space.” 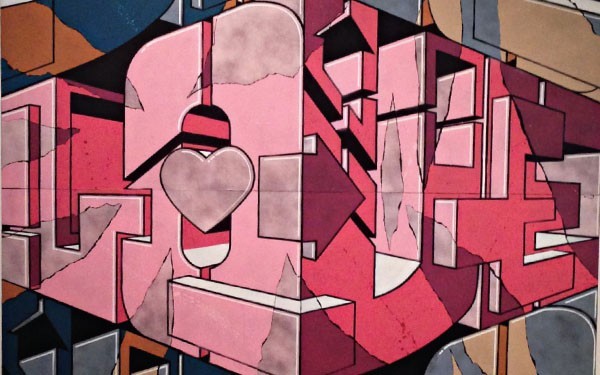 In Concrete to Data Pratt Institute and Parsons School of Design alumnus Jennifer Caviola, aka Cake, exemplifies this wide open aesthetic. Her public murals speak to the feminine mystique as they play with outdoor expanses, lines and color. Her piece “Truth Implies the Good” is a strangely sexy trifecta of women through which subtle exaggeration of female portraiture conveys deep strength, interstellar connection and subtle softness. In “Octopus Bride” Cake connects her subject to the depths below while also giving hints of alien life far beyond. Her interpretations of the female form are both elegant and disturbing, somehow blending the Art Deco hyper-realism of Santiago Martínez Delgado, the art nouveau of Gustav Klimt and the phantasmagorical science fiction of filmmaker James Cameron, whose strong female leads—Sigourney Weaver, Linda Hamilton—reinforced pop culture notions of girl power. 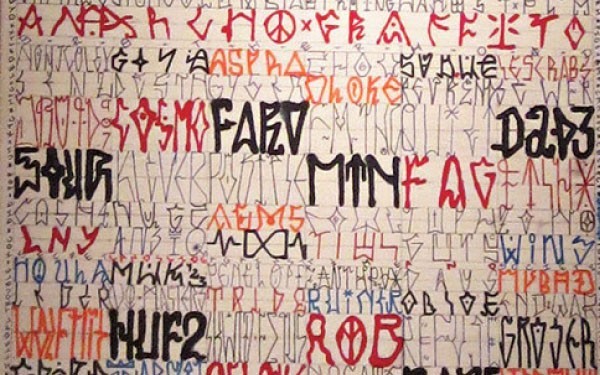 Adam VOID, “History of the World.”

The wall and floor murals of Ōyama Enrico Isamu Letter, a New Yorker by way of Tokyo, have a power all their own. Through their sheer size and hypnotic, jagged repetition, his public space works create a disorienting and overwhelming effect. Ōyama’s wild interpretations of twisted, metallic, double-helixed geometry hint at some sort of metaphysical barbed wire, rendering his works both strangely claustrophobic and simultaneously liberating. His three-dimensional prisms serve as both a warning and a wonder; in his cubist world we feel free to move about and to allow our perspective to be shifted. But in doing so, we are forced to confront our own creative preconceptions, realizing that the only limits to our creativity are the ones we erect ourselves. 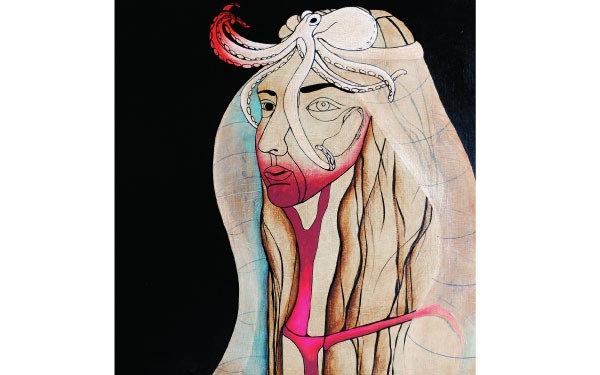 The culturally conscious works of Adam VOID and EKG speak directly to the unrest that pervades our city, our country, our world. Both artists dig in with a sense of anger, irreverence and disillusionment, and both evoke the pre-hip hop literacy of Jean-Michel Basquiat and in some sense, the sardonic toughness of rappers Nas and Mos Def. VOID’s depiction of New York City entitled “New York is Nothing” turns The New York Times in on itself and reads like a subway map to disenchantment. At the end of the line he warns us to “Abandon Ship!” because this apple, in his view, is rotting.

EKG’s “Voice of Dissent” also recalls Basquiat’s fractured, postmodernist, Post-It sensibility, hacking out notes of desperation and angst. His scratch-off scrawl on murals depicts a world of minimalist sci-fi that gives life to the blips and squeaks of a short-circuited collective consciousness. When he writes across his mural, “heartbeat of the city, pulse of the populace, voice of dissent,” we see that voice manifest in deep-red chicken scratch. It is urgent, brimming with dark humor and threatens to overflow into violence. It all somehow reeks of legitimacy. The casual consensus is that graffiti is unsophisticated vandalism—an outgrowth of misguided anger and boredom. In pulling these divergent artists together on various fronts, Seslow’s curation brings graffiti, and the artists who create it, out of the shadows and into the light. “I love to bring awareness to each person’s creative potential,” said Seslow. “Self-expression is our birthright. We all have it, and I believe it’s part of our life’s mission to find it and engage it.”

Concrete to Data can be seen at LIU CW Post’s Steinberg Museum of Art at Hillwood from Feb 2 to March 21. For info see concretetodata.com.

For More Graffiti
9 in art: Phetus
Huntington Native Phetus Honors Street Art
Writing on the Wall: ‘Taking It To The Street,’ is at Studio 5404