For nearly six years the melodic rock of Republic of Wolves has captured the attention of listeners around the country. Growing up in Eastern Long Island, Bill Duprey, Mason Maggio and Christian Van Deurs went to high school together in Riverhead, but it wasn’t until they met Gregg Andrew Dellarocca from Manorville that the four formed the band. Since then two more Long Islanders, Chris Wall and Ryan Sean Cullinane have joined Republic of Wolves and the indie-rock musicians have grown from a band first named as one of the Top 10 Indie Bands in Substream Magazine to a group of musicians just as ready to hold their own as music producers. Mason Maggio spoke with Pulse Insider about where they’ve been, where they’re going and growing into the role of producers.

Pulse Insider: How would you describe your music to someone you just met?
Mason Maggio: We always have a hard time with that, since genres seem to be less clearly defined these days. We often describe ourselves as heavy alternative/indie rock, or post-hardcore, or even emo. We don’t shy away from any particular labels, and we also don’t aim to fit specifically into any of them either. I guess my attempt at a more detailed description would be ambient, guitar-driven melodic rock with a dynamic range of moods and elements of hardcore, folk, and pop.

PI: Where did the inspiration for “No Matter How Narrow” come from?
MM: Our most recent album, “No Matter How Narrow,” was our first release after a 2-year hiatus, and we wanted to do something different from what we had done in the past. We had started to look back critically at our previous releases to try to figure out what our flaws were, and how to improve upon our sound. We ended up experimenting with more pop-oriented song structures and simplistic production styles, and really enjoyed taking a more light-hearted approach with that album.

PI: When you go into the studio do you already have a plan down of songs you want to do or is it a bit more organic?
MM:Since we have our own studio setup we can start to track ideas before they’re fully formed, and the production ideas end up shaping the songs themselves. We usually go into the process with some sort of general plan in mind, an overarching concept for what we want to create, but we allow that plan to change and develop as we move forward. 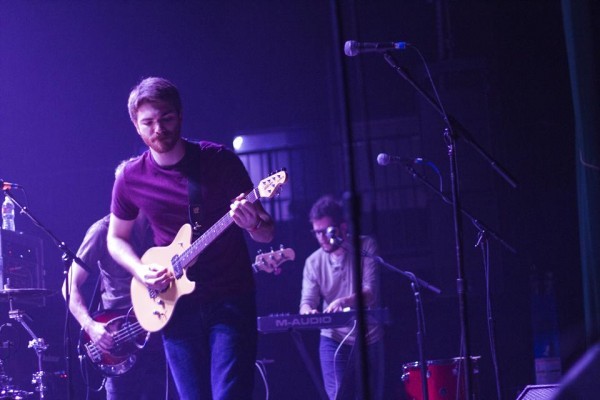 Republic of the Wolves at the Fonda Theatre in LA. Image: Republic of Wolves

PI: How has the musical style of Republic of Wolves evolved over the years?
MM:In terms of the songwriting I don’t think it has progressed in any particular direction, except that we’re a little bit more focused and deliberate. We’ve always had competing impulses to write all different kinds of songs, sometimes dark and heavy, sometimes lighter and more fun, sometimes slow and beautiful. I think we have all of those same impulses, but maybe a wider range of influences mostly in terms of embracing some more mainstream sensibilities.
The biggest change, I think, is our growth as producers. We have a lot more freedom to explore different sounds and mixing techniques, and we’ve become more capable on that side of things. Our last record started to push in a lighter, more simplistic direction, but I wouldn’t say that’s the evolution of our style in general. It was a conscious effort to do something different, but moving forward we’re probably going to let things unfold more naturally and most likely end up with something closer to our original, darker aesthetic. At the same time we always want to be doing something new and fresh and interesting, and I think our general improvement as producers and songwriters will allow for that.

PI: It looks like you guys are touring right now? Can you talk a bit about the tour, where you’re going, what’s cool about being on tour?
MM:We just finished a three-day weekend “mini-tour” in New York, Connecticut, and Philadelphia, but we still haven’t managed to do a proper tour yet. At this point we’re just looking for a booking agent or someone to help us put something together for the spring or summer. We’ve been talking about touring for a long time, but we’re definitely more ready than we’ve ever been. We’re really excited about it because we love going to new places and meeting new people, and we all get along really well. The few times we’ve played out-of-state we’ve had a lot of fun traveling together, and our last trip consisted of a two-hour-long philosophical debate and a marathon of Seinfeld quotes.

PI: Coming from Long Island do you still have a pretty strong fan base on the Island or is it spreading out a bit more?
MM: Interestingly enough, we’ve never had a particularly strong fan base in any one location. We gained popularity through the Internet, so our fans are really spread out far and wide. On the one hand it’s really cool to be able to say we’ve got fans all over the country (and in other countries as well), but it’s also a challenge in terms of drawing people to shows. I’d say our fan base is probably strongest in the New York area, but it’s hard to know for sure since we haven’t gotten out to play many other cities yet.

PI: What are you working on right now?
MM:We’re re-releasing our first EP (“His Old Branches”) on vinyl some time in the next month or two, and we’ll be doing a couple of special shows to celebrate that. We’re also writing for a new album that we’ll hopefully be able to start recording very soon, and we’ve got a week-long slot on this year’s Warped Tour that we’re very excited about!